ITEM: Yesterday, I was reading a newsletter from an organization whose work I admire very much. The newsletter included this video, a 4-minute long collage of images from the Bnei Anousim community in El Salvador, highlighting a series of the community's recent events. Watch it and tell me if you notice what I noticed.


Are there no women in the Bnei Anousim community in El Salvador? If there are, you'd never know it from watching this video.

Note: A few readers have pointed out that,on three occasions, women or girls are on the screen momentarily .That doesn't change my point. The images are of men in the community engaged in Jewish activities. As such, the video represents a skewed perspective on Jewish communal life.

ITEM: Today, I got an email inviting me to attend two workshops for women in business that are being offered by a different organization. The first is being given by a Mrs. Milworm. The second by Rav Dovid Kaplan shlita. He gets a first name, two honorifics and his name in large letters.

ITEM: A prominent Jewish magazine recently published a 4-page article about a colleague, describing how she became religious, moved to Israel and opened a business making wedding dresses and establishing a wedding dress gemach. Hoping the PR from the article would generate business for her, my colleague was disappointed to learn that neither her name nor the name of her business appear anywhere in the story. When she inquired, she was told, "We assumed you'd want to be anonymous."

ITEM: On page 49 in the Koren Yom Kippur machzor, there's a note that says: "Yom Kippur is the only time we wear a tallit at night..."  This tendency to use language that assumes all Jews are male is so pervasive, I could write an entire tractate on just this one point. 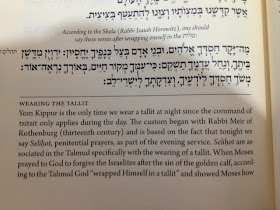 I could bring dozens more examples, because they happen nearly every day. To some, I know I sound like a nattering nabob of negativism. Nevertheless, I point this out because, when Jewish women are overlooked, dissed or completely absent from the picture, it wounds me physically.

Intellectually, I know that these, ahem... oversights, are the residue of the curses that were pronounced upon Chava, and therefore upon all women until the geula, for the ancient sin in Gan Eden.

I profoundly believe that the whole world is in the process of healing from the diminishment of  women's spiritual power and that these issues will eventually resolve. As my teacher Devorah (Heshelis) Fastag wrote in her book The Moon's Lost Light, the prophecy of nekevah tisovev gever (Yirmiyahu 31:21) assures us that eventually, women will, once again, be valued equally with men. Not by Gd, because certainly in Gd's world, that is already the case. But it is not yet the case in the human sphere.

Eventually, all this nonsense will evaporate like so much inconsequential fluff.

Until then, like Sojourner Truth's cry of "Ain't I a woman?" in her famous speech in 1851 about gender inequalities, whenever I see yet another example of Jewish women being omitted, neglected, excluded or disrespected, I want to cry out on behalf of all Jewish women:

The world hardly needs any more negativity. While disagreement is fine, comments that include sarcasm, anger and nastiness will not be approved for publication.