Last night, I was introduced to the idea of composing my own Book of Nissim.  This is a small journal in which one writes a small miracle that happened during that day. Just one a day.  Then, over time, you can read over what you wrote and see how Gd is taking care of you, day by day.

So I started thinking, and it wasn't hard, because yesterday, I really did experience a miracle.

We were driving on a crowded street in Jerusalem, on our way to lunch.  Pitom (Hebrew for "suddenly"), we got slammed in the back by another car.  Stuff went flying in our car.  My husband's kippa flew off his head.  We stepped out of the car hesitatingly to examine the damage.  The front end of the car behind us was smashed in.  Fluids were leaking out of the engine.  The damage was considerable.

And to our car?  Klum!  Shum davar!  Nada!  Our car is old, so one little scratch might not be immediately obvious, but really, it was miraculous.  The other car was in bad shape.  Our car was no worse for the wear.  Clearly, Hashem was with us.

Chasdei Hashem, we were spared from all physical injury, save a little ache from the force of the impact.  Our car was spared from all observable damage.  We were spared the hassle of having to deal with insurance companies and car repair shops.  We just took the other driver's info, which we probably don't need, and drove off to eat what had been elevated from an ordinary lunch to a seudat hoda'ah, a meal of thanksgiving.

Would it continue?  Could I find a miracle a second day?

Here's my story for today...

At the end of last month, I got a courtesy call from Cellcom, our cellphone company here, to tell me that one of the numbers on our family plan ran up a bill of over 3600 shekel (about $1K).  In one month.

Here's a budgeting tip - not all Internet packages in Israel are unlimited.  Take that tip seriously.

The Cellcom customer service person told me that someone would call me back to discuss options. After my heart stopped racing, I thanked him for his call and waited for the phone to ring again.  This was a Friday morning.

Shabbat came and it was Sunday morning before I got the follow-up call.  A small miracle is that the call came during my break from Ulpan when I was available to answer.  I spoke to the second customer service representative and we worked out a payment plan that was to our benefit.

Two weeks later, I got the bill, and it was for the full amount.  My husband suggested seeing it as the price we have to pay for living here.  Some people have difficult experiences during their initial time in Israel.  I've heard horror stories.  Legal problems.  Financial problems.  Family problems.  Criminal problems.  There's no end to the difficulties some olim have, most of which we, so far, have been spared.  So my husband suggested we write it off as a relatively painless way of paying our "klita debt".

But I knew I had spoken to someone at Cellcom and worked out a more favorable deal, so I was already thinking of contacting Voleh, an organization of lawyers who help immigrant English speakers with legal entanglements.

Today, I called Cellcom to try to find out why the customer service rep told me one thing and the bill said something else entirely.

The woman I spoke to at first did not speak English, but as best as I could understand her, she said someone would call me back within 3 hours.  So I sat to have lunch.  I had put my cellphone on vibrate in Ulpan and forgot to switch it off, but thank Gd, it was near me when I got the return call just 30 minutes later.

Miraculously, this customer service representative understood the problem and told me that the solution had crossed with the bill, and that I was not, in fact, being charged that gigantic amount this month.

My Book of Nissim is only two days old and already a source of joy. 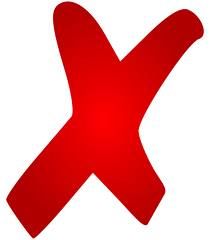 Last night, I had occasion to consider moving back to America.  It doesn't matter why.  Even the casual consideration of it made me shake.

We had a nice life in America.  There's no doubt about it.  But it horrifies me to think that I might someday be forced to return.  Even though I really do miss David Chu's kosher Chinese restaurant.

Here's a truth about life in Israel five months in.

It's often scary, but not for the reason you might assume.

The language is a big part of the fear.  Even with a full-time ulpan and unarguable progress, I'm still far from being conversational in everyday situations.  I often have to rely on my husband or daughter for translation assistance.

I look at job announcements, and even though I'm willing to work far below my previous level of achievement, it seems that almost every job I might consider requires a higher level of Hebrew fluency than I have, and that I might ever have.  That's scary.

Even though I have been driving for close to 40 years, I still don't feel comfortable driving in Jerusalem.

I can't find basic, everyday products in the grocery store without help.

I don't really understand how my bills are calculated here.  I for sure don't know how to read, let alone balance, my bank statement.

I can't make small talk with people at the bus stop.  I don't always understand what cashiers at the grocery store are asking me.  My standard response to every question people ask me on the street is, "I'm a new immigrant.  I don't know anything."  At least I can say that in Hebrew.

I often feel very vulnerable here - economically, certainly, but also culturally, though that's mitigated by my tendency to spend most of my time with other English speakers.  Every time I step out of my home, I am reminded that there are ordinary, adult things I just don't know how to do in this new country of mine.

That's not the only thing I feel.  But that's the truth.

But to think of going back? Going back to live in someone else's country where I felt misunderstood for so many years?  Not having the privilege of waking every day in the Land I truly believe is the only future of the Jewish people?  Turning my back on one of the major gifts Hashem gave the Jewish people? Retreating to the galut?

Nope. Not happening.  May Hashem save me from such a fate.
Posted by Rivkah Lambert Adler at 2:15 PM 7 comments 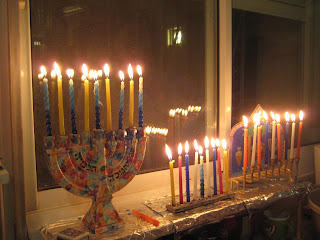 Olim chadashim (new immigrants) are sometimes called olim cholim (sick immigrants) or, as I heard recently, olim chalashim (weak, sickly immigrants) (trust me, it's funny in Yiddish) because of our tendency to get ill upon arrival in Israel, both from the stress of making the move and from the new germs that greet us here.

We just passed our 5-month "aliyahversary" and I thought I had escaped the curse of new immigrants because I have been well and healthy, thank Gd, all this time.

But this past week, during the Chanukah vacation, I was felled by a foreign viral intruder that took over my body and stole much of my Chanukah vacation.  There were so many fun things planned, we actually had to write out a schedule to make sure we didn't double book ourselves.  Then we ended up cancelling a whole bunch of them so I could zone out on Nyquil (which beats what I spent Tuesday night doing, but I'll spare you the gory details.)

Nevertheless, we did get to do some fun stuff before and after I took to my bed fulltime.


This was a peek into our first Chanukah in Israel.  Next year, may I be blessed to celebrate all 8 days in good health with my family and all of Am Yisrael in Eretz Yisrael.
Posted by Rivkah Lambert Adler at 9:28 PM 4 comments