A Public Mitzvah in Baltimore 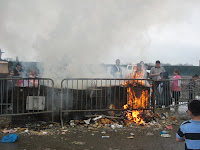 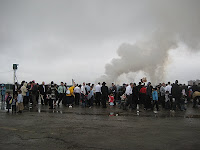 I always thought that Baltimore did biur chametz (the final burning of prohibited foods just before Passover) particularly well and I applaud all the volunteers that help make it happen year after year.  Last year, the public chametz burning was moved from the Glen Avenue Fire Station to a parking lot at Pimlico Racetrack.  The racetrack is 5 minutes from our house, but it took an hour to complete the mitzvah because of all the traffic - hundreds of Jewish families going out to burn their chametz.  In previous years, I always imagined that this was what life in Israel would feel like - mitzvahs done by hundreds of people at a time, right out in public. Most years, there are young men collecting charity among the crowds and plenty of neighborly wishes for a good and kosher Pesach.  It's a very Jewish moment in Baltimore. 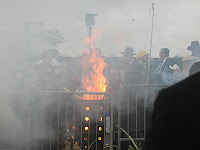 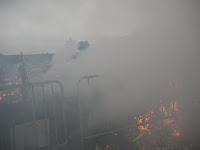 And yet, on the slow approach to the site of the public chametz burning, we passed any number of non-Jewish businesses and houses of worship in a neighborhood that is clearly not one where Jews live today.  I have to imagine there were few among us who didn't ask themselves, "I wonder what the non-Jews around here think of what we're doing, coming into their neighborhood and making a huge amount of smoke?"

So even this very public mitzvah in Baltimore, done with as much kiddush Hashem as possible, is a potent reminder that we live in someone else's country.

Funny how much we are on the same page these days, my friend.

Very well said. I try to express this exact same idea often to Israelies, but they don't get it. I guess it'll be left up to us olim to trully appreciate living in a Jewish country - something that chiloni Israelies especially cannot understand. My great thrill this Pesach was from going into a regular supermarket and having all of the chametz items covered up with white plastic with big "chametz" signs all over them. You'll never see that at Giant or Safeway.

May it be so for the ganze mishpacha, very very soon.