My husband is truly the most flexible person I know. He rarely asks for anything specific for himself.  I, on the other hand, am known to have very specific preferences, to which he almost always acquiesces.

It makes for a great marriage.

So when my husband mentioned that he wanted to go see the Shwekey concert at the outdoor amphitheater in Caesarea, and it was on his Hebrew birthday and he mentioned it several times, it was impossible to say no. 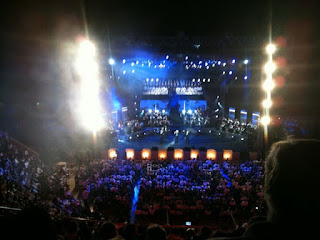 The truth is, I didn't love the music.  I'm more the acoustic music with strong, sweet vocals type, and this was a huge production with a choir, complex lighting, several stages, video and more.  I don't know Shwekey's music. None of it was familiar and I had a very hard time understanding the actual words he was singing.  And, although Shwekey appears to have his share of female fans, there was an overwhelming, inescapable masculine energy in the place.  Even the videos, which were screened during virtually every song, did not include a single image of a Jewish woman.

At the same time, years ago, my husband taught me to always try to find something to appreciate in everything.  So I actively looked for what, besides the music and light show, I could appreciate about the evening. 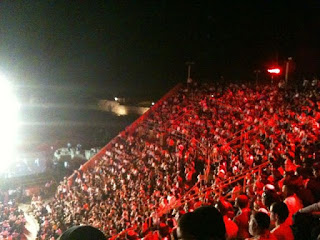 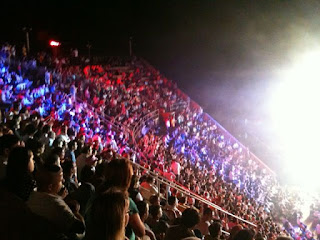 I used to think it was a little corny when I would hear others referring to our people as holy Jews.  Yet, all around me, were thousands of, I have to agree, holy Jews, sitting outside on stone steps, breathing in the air that the Talmud says makes us all wise.

The evening weather was beautiful - breezy and comfortable.  There were waves crashing in the surf behind the stage which we could see but, regrettably, could not hear.  Nevertheless, I enjoyed the salty smell of the sea.

Nearby, there were a couple of young mothers cradling their sleeping children and there was a religious teenage boy sitting right in front of me who impressed me somehow. Silently, I prayed that my daughter should eventually choose someone like him to marry. Just a few minutes later, the boy's father came to sit with him and the father turned out to be someone we know from Baltimore.

I was thinking, here are thousands of Jews singing about Hashem, singing about peace, arms waving in the air, crowds swaying (and occasionally swooning) with the music. It was all kosher and wholesome and, in its way, really lovely.  My holy Jewish brothers and sisters love life. In contrast, the hate-filled enemy, Mahmoud Abbas, President of the PA, was recently quoted as saying, "I will never agree that there will be a single Israeli among us on Palestinian soil."  Last night, I felt the contrast sharply.

Since it was my husband's Hebrew birthday, I extracted a couple of important brachot from him.  And in the end, the music itself notwithstanding, I was glad I went.

There is something so complete about the joy I feel in Israel.

Even though you and I argue lovingly (may we continue to do so until I reach a hundred a twenty) about woman and Judaism, I love the honesty with which you write. Your impressions are so much more valuable to me because you speak them sincerely. So when you break down and call us "holy Jews," it means even more to me than when a starry-eyed Breslov kid says it (and it means a lot then). Keep sharing your views, in your beautiful lashon.