There's a whole aspect of life in Israel that I've barely touched on in recent posts because it's not easy to articulate.  But a few recent experiences have encouraged me to try to capture some of the feeling of being in a place where God conversation is an ordinary thing.

In America, I rarely went to shul for several reasons, some of which are no longer applicable now that I'm here.  Compared to my previous shul attendance track record, I've been to shul startlingly often in the last five weeks.

I've also attended three shiurim since last Shabbat.  And I'm much more aware of Rosh Chodesh than I ever was before.  In America, I mostly knew it was Rosh Chodesh because my husband would remind me to add yale v'yavo to my bentching. Not something I'm particularly proud of, especially considering that women have a special relationship to Rosh Chodesh, but it was, nonetheless, the case more often than not. 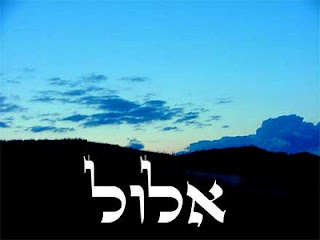 Not sure if it's because it's Rosh Chodesh Elul, or because I was in shul for Shabbat Mevarchim or because I attended three shiurim about the spiritual work of Elul or simply because I'm in Israel, but I was exceedingly aware of my first Rosh Chodesh in Israel.

Last night, I went to a shiur about preparing for Rosh Hashana with Rabbi Lazer Brody at Berot Bat Ayin.  There were about 45 women crammed into a rustic, 2-room Beit Midrash.  The setting was rural.  Two fans whirring and the relative coolness of the Gush Etzion evening set the mood.

Rebbetzin Chana Bracha Seigelbaum spoke first about the special qualities of the month of Elul.  Rabbi Brody's words, in particular, spoke to a place deep in me that I cherish but can't always access.  He talked about how important it is to pay attention to Hashem.  How true teshuva makes us happy.  How our own transgressions are what block Hashem's light.  How our job in this world is to refine our souls.  I left feeling uplifted, with a specific plan, as suggested by Rebbetzin Seigelbaum, to help me prepare for my first Rosh Hashana in Israel.

After the shiur, I bought a small book about the spiritual practice of hitbodedut and the importance of speaking directly to Hashem in one's own words each day.  I felt so much a part of the world on the bus, so happy to be among so many people, grateful to have a seat on the exceedingly overcrowded bus all the way home.  During the journey, I began to read the book, though it was nearly midnight and the light was dim.  Next to me, another passenger played a video game on his cellphone.

His activity was a vivid contrast to the elevated head space I was in after participating in an evening of God conversation.

I like being in that head space.  It's a place I want to visit more often.
Posted by Rivkah Lambert Adler at 1:08 PM

Your excitement is infectious. Time to move away from this computer and check out a shiur or two. Good call, Rabanit!