In America, I had an Israeli flag on my car for a few months and often felt self-conscious about it.  In certain neighborhoods, I worried that my car might be vandalized as a result.

Yesterday, I noticed a Jewish Star hanging from the roof of an Egged bus near the driver and I thought, with pleasure, about how explicitly and unabashedly Jewish this place is.

It's an unabashedly Jewish place, and it's also a complex place, full of irony.  This morning, in my davening, I was saying Acheinu and thinking about Gilad Shalit, the Israeli soldier who has been held in captivity by Hamas since 2006.  Exactly then, I turned to my right and saw a full Arab bus drive by.  I'm not suggesting that anyone on that bus bears direct responsibility for the capture of Gilad, but it was, minimally, ahem... ironic to have been davening for his release at the exact same moment a busload of Arabs drove by.

On the other hand, I get to see Har HaBayit from the bus window every day on my morning commute. How incredibly fortunate I am that the site of the Third and final Holy Temple is part of my everyday life.  My husband taught me to say the yehi ratzon at the end of the Shemoneh Esrei in which we ask Hashem to rebuild the Holy Temple just as the bus is passing by the site and Har Habayit is in view.  Try doing that from Park Heights Avenue!

Two more quick stories, though neither is really about bus rides.  I recently realized that, as a result of living in Israel, I have to alter the bracha I make after eating grapes.  When you eat grapes that were grown in Israel, you don't just bless Gd for the fruit, you bless Gd for her fruit, for the fruit of Eretz Yisrael.

Finally, a small reminder of Baltimore that I see each day before walking into ulpan: 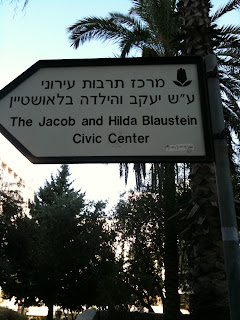 Not sure what you mean. I so cherish your comments, so can you elaborate?

I guess it was just a way to let you know I had read it, and enjoyed it. I so cherish YOUR perceptions of our Homeland... but sometimes, your commentary has said it all, and all I can do is appreciate.

I guess I could comment on how cool it is that the Jewish star is floating above the bald head. Less Jewish-identity issues here, even among the not-yet-frum? I dunno. It is just such a pleasure to be here, and to be privileged to be excited about everything.

Your posts remind me of the child-like amazement that came through in my earlier Aliyah blog posts.

Thanks for reminding me to take a step back from my personal rat race and enjoy in the precious "little" things I sometimes take for granted. :-)