A Tale of Two Concerts

Enjoy a free Melava Malka concert this Motzei Shabbat with the band Rega'im at the Matnas' Cultural Hall in Ma'aleh Adumim - featuring Adam Vinter, Menachem Ophir and special guest performers! Rega'im will playing songs from their album "She'Ya'aleh Or" as well as many Carlebach songs.
And so, though we arrived late and left early due to pressing family demands, we went to enjoy.  There were five young men, mostly religious, playing their music in the most humble of contexts.  A simple room in the local community center. 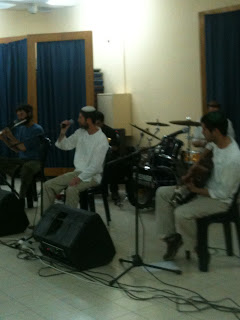 The band members sat on the ubiquitous plastic chairs that one finds all over Israel. 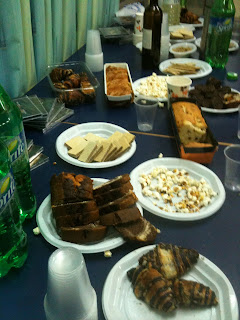 I used to find the standard (and, yes, ubiquitous :-) plastic cups in Israel, as pictured above, flimsy beyond measure.  Now I realize that they are actually consistent with my values of "good enough" when it comes to things in the material world.  In contrast, plastic cups from the Old Country are hard for me to throw away without guilt because they are thick enough for many re-uses.
But I digress...
So you get the picture.  The setting was humble.  The refreshment table was humble.  The band members were humble.  And the music was lovely.  There is something ever so authentic about Israelis singing and playing Hebrew music, much of it based on tefillah (prayer) or T'Nach (Bible) texts.  In Israel.  On motzei Shabbat.
Last night, I attended a concert of a different type.
We are pleased to inform you about an exciting women's event. The acclaimed Ayelet HaShachar Women's Band from Baltimore will perform a concert to benefit families of Carmel fire victims Sunday evening, January 2nd.  Here is an occasion to show solidarity with our fellow Jews at a beautiful and enjoyable women's evening.

The members of this band from Baltimore (Lisa Aronson Friedman on the left, Shalomis Koffler Weinreb on the right and especially Stephanie Rabinowitz in the middle) are personal friends.  I can't count the number of conversations I have had with them individually about our shared longing for Israel.  Back when I was also stuck in Baltimore, these women were some of the handful of friends who "got me", and got the longing for Israel that drove nearly every decision I made.


So here I am, sitting in Heichal Shlomo, an auditorium in the center of Jerusalem.  Among the approximately 200 women in attendance are a large group of friends from Baltimore, most of whom (though sadly, not all) live here now.
Last night, I remembered the sharp longing to be here that I felt countless times, sometimes while sitting in Baltimore but most often when I was visiting Israel but knew I could not stay.
I have their CD Ohr Chadash and have heard it a hundred times.  Last night, there was something special in their music, perhaps because I was together with them, for the first time, in Jerusalem.
Shalomis wrote their song Rachel Imeinu.  These are Shalomis' words, the ones that brought that sharp longing, and the tears that always accompanied it, back to me with such total recall:
...As patient as the afternoon moon,
Waits for her moment to shine,
Rachel Imeinu waits by the road
For her children to come home.
Rachel Imeinu cry no more
We're coming,
we're coming,
We're coming home.
One by one
we come home
We're coming home, Imeinu
One by one we come home...
May Hashem bring these special women Home very, very soon.
Posted by Rivkah Lambert Adler at 11:38 AM

So sorry I missed both concerts. I have the 'Rega'im' CD and I love it. And I would so have enjoyed attending the women's concert as well. Wasn't meant to be. Thanks for sharing!

I always loved you, and knew your longing to be here was genuine. But I have so enjoyed the you that has "morphed" since you have arrived: "Now I realize that [flimsy disposable cups] are actually consistent with my values of 'good enough' when it comes to things in the material world." It's the little things that bring Geula, probably. May more and more of our sisters come Home, and gain your clarity about what really matters.

Thanks, Rivkah. It was wonderful to see you looking so alive, happy, strong, centered, fulfilled and shining. Performing for those amazing women that night was an incredible experience. There was such love and achdut there...such an outpouring of joy and praise and yearning for the Geula...we (all of us) blew the roof off the place! The music was different because it was in its right place...it was home. And everyone there was resonating in exuberant harmony with it like one giant joyful neshama in love with Hashem. Glad you were there.