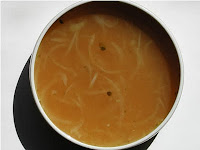 And the onion soup was delicious.
Posted by Rivkah Lambert Adler at 10:59 PM

And the next time you have a problem with your phone, call me. But then you wouldn't have an uplifting experience sitting in the cell phone store. I thought you were going to say that you used your iPhone for a secular, chutznik purpose, and it died, so the lesson was only to use it for worthwhile apps. But then I remembered, it's a chutznik iPhone. You're probably taxing it with too much spirituality.

I'm so proud of you, and jealous! An entire meal together, exclusively in Hebrew?! Come, touch my hand, so I get a little of that enthusiasm vicariously!

Perspective is a wonderful gift, isn't it? I am so grateful to Hashem that He cares about us so much as to take a few minutes from His busy day to remind us of what matters.

And because I love you, may I second your most important prayer: "Thank Gd it was just something material, and not [your] health, that was broken."

Just imagine how the cellphone companies could market their service centers to the religious public: "Every moment a spiritual experience!"

Isn't it expensive to get iPhones to bring to Israel? I am making Aliyah in July and would like to purchase a few for my family? How does it work? Thanks!

I looked into buying unlocked iPhones in America before we came on aliyah, but a year ago, they were more than $500 each. We bought our iPhones through Cellcom, which is the largest cellphone provider in Israel and we got a deal that links the payments for the iPhone to our service plan. It's my impression that people in Israel don't buy phones outright. They are bought in 36 monthly payments. But that's how it's done here, and there is a high level of iPhone penetration in the Israeli market which, theoretically, should make phones cheaper. In general, I find the whole cellphone industry incredibly complex here, but in the end, I decided to buy them locally and have not regretted the decision.