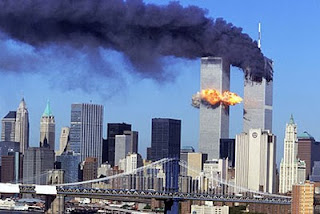 I've written before about how September 11, 2001 was a pivotal date in my Jewish story.  On that date, it suddenly became clear to me that America was a host country and that we needed to move to Israel.

To this day, it isn't something I can explain.  It was a message that blossomed, fully formed, from within me and grew stronger and stronger over time.

At least, that's how I always retell the story.  But today, in talking with an old friend who was already living in Israel on that date, it occurred to me that I might be misremembering a part of the story.

I distinctly remember talking with her on that date and I remember something she said that really angered me.

At that point, I had been to Israel 5 or 6 times.  Israel was nice.  I intended to come back and visit some more.  But our home was in Baltimore.  So much so that, the month before, I imposed upon my husband to take me on a tour of all the Jewish cemeteries in Baltimore so I could pick the place I wanted to be buried.  I had every intention of living the rest of my life in Baltimore.

Into that mindset, my friend asserted that it was impossible, while living in America, to understand the significance of September 11 in Jewish history. She argued that spiritual clarity was only possible for those who live in Israel.

I was SO offended.  I thought she was both arrogant and categorically wrong in making such assertions.

Ten years later, I see she was actually on to something.

I have been painfully aware, after recent events of this past week in particular, that the chasm between American Jews and Israelis is huge. Uncomfortably huge.  Maybe insurmountably huge.

First - My oldest daughter brought home a printout of an online argument she had yesterday with an American who claims the following about Israel - "BOMBED AND ATTACKED UNARMED CIVILIANS  with Phosphorous and High Explosive munitions from tanks/artillery/fighter jets, PARENTS SHOT IN FRONT OF THEIR CHILDREN.  Embargoes and sanctions, confiscates land and evicts unlawfully at the point of a gun and bulldozes, murders countless Palestinians directly or indirectly " (sic). He argued that these behaviors make Israel complicit  in the Fogel murders.

Second - A neighbor pointed out a Facebook conversation she and some others had with her American cousin who feels quite certain that, "The settlements are harmful to the peace process, and harmful to Israel herself. While what happened in Itamar is horrible, tragic, and inexcusable, it will simply add to the tragedy for it to be used to further a destructive policy that harms Israel and alienates her supporters."  That particular conversation was 28 back-and-forth comments long between American olim who now live over the Green Line and a liberal American Jew.  As an outsider reading the exchange, it's painfully obvious they don't share a common paradigm.


The third example is from a Baltimore reader who commented on my recent post, Not One Whit - "Surely, Rivkah, you are not suggesting that the devastation of Japan is somehow an act of God for the benefit of amcha [literally, "Your people" and a reference to the Jewish people]? or that Japan is an enemy to be destroyed? Please tell me you don't mean to draw such a conclusion!"


In fact, that's exactly what I meant.  I know that people across the chasm can't really hear that.  I can even understand why it's distasteful to so many Jews to assert that God is punishing Japan to benefit the Jewish people.


And yet, the Internet is on fire with reasons why this might be so.


There's the case of the three yeshiva boys from Israel who, in 2008, were charged with smuggling drugs into Japan and imprisoned.  In April 2009, one was sentenced to 5 years in a Japanese prison.  He was recently pardoned in Israel.  Last March,  a second was given a 6-year sentence in a Japanese prison.  I am unable to find conclusive information about the status of the third, only that his trial started in October 2010.  The defense has argued all along that these were innocent, sheltered yeshiva boys who were tricked into smuggling drugs into Japan, but the Japanese courts have dealt harshly with them.


There is the fact that Japan (along with Italy, Hungary, Romania and Bulgaria) was a German ally in World War II.


And the fact of Japan's support for the Palestinians.


And there is the imponderable existence of antisemitism in Japan in spite of the fact that there are so few Jews there, including the widespread belief that Jews are behind a global conspiracy to destroy Japan, documented in the book Jews in the Japanese Mind.


I don't pretend to know how Hashem's mind works.  But I don't doubt for one minute the plausibility of Him exacting revenge on Japan on behalf of His people.


Yes, I know how un-politically correct that sounds.  Yes, I know that many people will find it so objectionable that they will be unable to hear it.


The chasm between us exists.  It's real.


All I can do is keep speaking my truth.
Posted by Rivkah Lambert Adler at 2:06 PM

Okay, I've never commented on my own post before, but I just saw this on an Arutz 7 talkback and had to add it here because it makes my point better than I did:

Toronto is not an exile.
There is zero antisemitism here. The Canadian government is very pro Israel. A Jew has everything he needs here to live a full Jewish life.
Mark, Toronto (03/17/11)

You know why you are great BatAliyah? Because you speak the truth and share it. so many people see and feel what you say but would never dare say it or let their minds develop thoughts like you do. Kol Hakavod. If only more of Am Yisrael saw the light that you are so blessed to see here in our land.

While I understand what you're saying, your take on Japan makes me question how you would view a natural disaster that would take place (chas v'chalila!) here in Israel. How is this approach any different from the rabbis who make pronouncements after disasters here - for instance, that the Carmel forest fire was God's punishment for chilul shabbat in the region (as if they really know)? Isn't it enough to say that there are all sorts of forces at work in the world right now and that we should do our part by davening and doing introspection and maasim tovim, without trying to give reasons for what is really incomprehensible?

Simply because your very own words belie the truth of the matter. There is no such thing as a "natural disaster". Nothing happens without Hashem pressing the button.

BS"D
I know another country that is very against settlements and keeps on trying to impose unfair restrictions and regulations on Israel... Yeah it starts with a big "A". I wouldn't want to be anywhere near there anytime soon. By the way, Rebbe Nachman teaches that it is from Israel which is in the center of the world that one can clearly see Hashem's hashgacha over the world. The Tzaddikim here are telling us to come back home. Nu!

mike - that's exactly what i'm saying! Do we have to assume that every natural disaster is a punishment from Hashem for something???

I certainly respect you 'speaking your truth'. And anyplace outside of Israel is most certainly exile, and therefore undesirable (maybe forbidden) by definition.

But I think your take on Japan may be wrong. 1. The yeshiva students knew darn well they were smuggling. They agreed to do so. They just didn't know it was drugs. But they agreed and intended to break Japanese sovereign law, with clear disrespect and disregard for that sovereignty. I don't think Hashem's Torah defends that in any way. What's your husbands rabbinic take on that? 2. The Japanese attitude towards the Jews is more complex than what you suggest. For one thing, they look askance at pretty much all foreigners. For another, there is much they admire about Jews. Read Tokayer's 'The Fugu Plan'. They at least believed they could benefit and learn from the Jews. And let's not forget the yeshivot that survived the war by running to Japanese-controlled Shanghai. Japan has also produced the Makoya. Granted an isolated sect; but few other countries have produced anything quite like them. When we lived in Ramat Eshkol in the 80s, the sect maintained a permanent residence nearby.

I just mean to point out that it really isn't so simple.

For a different take, these audios might be of interest: Rav Moshe Taragin Thoughts On The Crisis in Japan http://www.kimitzion.org/ and Rav Aharon Lichtenstein (in Ivrit) http://torah.libsyn.org/--7

Bracha I think you have missed my point.

I am saying that regardless of how we view it, it is not a "natural" disaster. Hashem brought it about for some reason, and that being true, you have 2 choices. Either it's a reward or a punishment. It would be a huge stretch to find anything rewarding about it, so the answer is yes, it's a punishment for something. But you won't find me speculating as to what.

Mike: "either it's a reward or a punishment".

I think the teachings of our sages in numerous places show that to be an overly simplistic perspective. Hashem's world and interaction with us is too complex to be reduced to a simple binary formula. We need to have a little humility before thinking we understand the Torah and creation so deeply that we understand and can identify clearly the workings of Divine providence in the process of history. Maybe, maybe with hindsight. The g'mara emphasizes that even with the miracles of Hanukah, the sages needed time before being able to determine what had happened and what the response should be.

The three yeshiva boys have been treated harshly, but where's the measure for measure aspect?

Support for Germany during WWII is historical -- why now? Actually, WWII didn't end very well for Japan. Maybe that message was already sent to Japan when the US dropped two atomic bombs.

So why now and why in this way? It's because of Iran. Japan has good relations with Iran. Japan was helping Iran with their nuclear program. Japan was offering to assist Iran with nuclear enrichment. I certainly don't know the full extent of Japan's assistance to Iran....

But I do know that a freak earthquake created a scenario that crippled Japan's nuclear industry and devastated their environment through radiation exposure (again).

This seems timely, direct, and measure for measure.