In Holon, an Israeli city just south of Tel Aviv, I had a most unusual experience this past week.  On the grounds of the Children's Museum in Holon, there is an exhibit officially called "Dialogue in the Dark" but more commonly known as The Blind Museum.

I heard about it from my kids, who both went with school trips.

It's not a simple thing to get in as an individual because you have to go through the experience in groups of 10 and groups with English-speaking guides are less common.  So when I found that the OU Israel Center was organizing a tour for English speakers, I signed up immediately.

The exhibit puts a group of 10 people together in total darkness, led by a blind or visually impaired guide.  For an hour and a half, you have only your white cane, your wits and the assistance of your blind guide to get you through a maze of experiences, including visiting a park, a busy city street, a market and getting on and off a boat.

Our guide, Meir, was a calming presence in anxious moments.  At the beginning of the tour, Meir reminded us that we are all virtually addicted to sight, relying on it nearly to the exclusion of our other senses.

Especially in the beginning, I felt completely vulnerable just stepping forward.  I had no sense of orientation, no way to anticipate what was coming and a general, low-level anxiety about getting though the experience without getting lost or hurt.

Frequently, as a new immigrant, I am faced with the need to do things that cause me anxiety.  Not paralyzing, but certainly uncomfortable. So many things are still so new and, because I don't understand the language well enough to be a confident communicator, some days, there is a near-constant hum of disquietude.

This experience, the necessity of frequently facing things that make me uncomfortable, is a truthful part of my klita story.  I didn't know to expect it when we made aliyah.

To be certain, it's not every day that I feel it. And, as I get used to certain routines, the areas over which I feel a sense of competence increase. For example, I think I'm getting the hang of using the Rav Kav card.

And tonight, I made cinnamon challah in my Israeli kitchen and they look and smell fabulous. 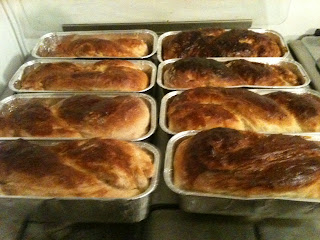 So, for today, I've banished my low-level olah anxiety with the mitzvah of challah for Shabbat. In Israel.

And that about captures what my life feels like these days.