The First Flowering of our Redemption? 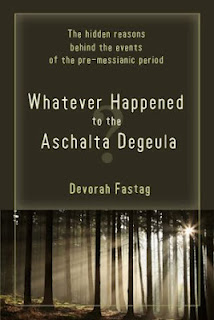 Just before Chanukah, I met Devorah Fastag who wrote a brilliant, original sefer that influenced my thinking about the status of women in Judaism very deeply. I met her in December at a Torah lecture that she gave and, because I was so impacted by her book The Moon's Lost Light, I took the opportunity to ask her if she had written anything else.

She told me about a lengthy essay she had written about the establishment of the State of Israel and its relationship to messianic times. It was difficult reading, she warned me, not a sugar-coated, romantic picture. What she wrote was ill-suited for a feel-good Yom HaAtzmaut program. I was warned that it would be emotionally hard to read and might create cognitive dissonance for me as a religious Zionist.

There are three themes in Torah that are endlessly fascinating to me: Jewish women, Eretz Yisrael and geula. Like her book about women in Judaism, this essay wove together several of my most personally compelling Torah topics. I would not be deterred.

Concerned that it might lessen my simchat Chanukah, she sent me the essay in two parts - one before Chanukah and one after.

I swallowed Part I in one huge gulp and was anxious to read the rest. After I read the essay as a whole (it's 76 pages - the length of a small book), I knew that this Torah needed to be read by other people as well.

The manuscript needed a bit of editorial attention and it needed a home on the internet where people could access it. Through the kindness of Jewish-e-books, which also sells The Moon's Lost Light, Mrs. Fastag's essay, "Whatever Happened to the Aschalta Degeula?: The hidden reasons behind the events of the pre-messianic period" is now available for free in three different formats.

If you don't have an ereader like a kindle or a nook, you can read it on your computer by downloading the PDF version.

Why does the State of Israel resemble the "beginning of the redemption" physically, yet not spiritually? This booklet delves into the hidden reasons behind the events of ikvesa demeshicha--the pre-messianic period--to unravel the mystery of the State of Israel.

The essay doesn't cost money, but it does require an investment of time and thought. It's a powerful essay that just might change the way you understand what was going on spiritually at the time of the establishment of the State of Israel.