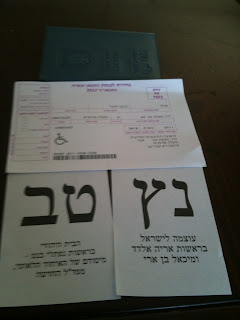 These are the tools of a voter in Israel. The blue teudat zehut - my national identity card, the postcard that told me where my polling place was, and the slips of paper, each representing the two parties between which I have been tossed for the past few weeks.

Last night, I dreamed that a candidate for one party told me to vote for the other party. That's how deeply uncertain I was.

Today, I stood there and asked Hashem to guide my hand. Today, I voted for the 19th Israeli Knesset in the modern State of Israel. This was my first time voting in a national election as a Jew in in Jewish county. Like a lot of my fellow olim, I said Shehecheyanu- the blessing for special occasions, to express thanks to Hashem for sustaining me and getting me to the point where I can express myself by voting for the party that I think best represents my interests in the government of the State of Israel.

The actual voting took less than 10 minutes, including waiting in line.

I still feel a little shaky.

I did something momentous.

In the end, as with all other decisions, the outcome is ultimately in Hashem's Hands.  In the end, I derive great comfort from that.

Mine also took about 10 minutes. No waiting and they let us take as many pictures as we wanted :)
I got a little teary, was a really momentous occasion.