Standard Purim costumes include princesses, clowns, cowboys and sports fans. But some Purim costumes need a bit of explanation. Here follow a handful of clever, creative, homemade costumes spotted this Purim that may need a little, ahem.. clarification.

waze is a combination GPS and social media app that was created in Israel and sold to Google for $966 million. Chana and Jeremy Staiman dressed as the waze logo.

They even took the waze theme to the next level and included this sign with their mishloach manot. Since Jeremy owns a graphic design business, they really raised the bar beyond where we ordinary mortals can compete. 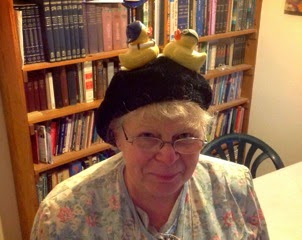 But wait! There's more! Here, she's wearing a shift (a loose-fitting dress) and a pair of dimes, representing a paradigm shift. 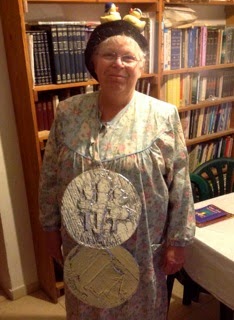 Dena Udren was pregnant this Purim, so she dressed as a shana m'uberet - a "pregnant year" which is how we refer to a leap year in Hebrew. When the Hebrew year is a shana m'uberet, a leap year, there are two months of Adar. She's wearing two of the kabbalistic/zodiac symbols for Pisces which goes with the Hebrew month of Adar. 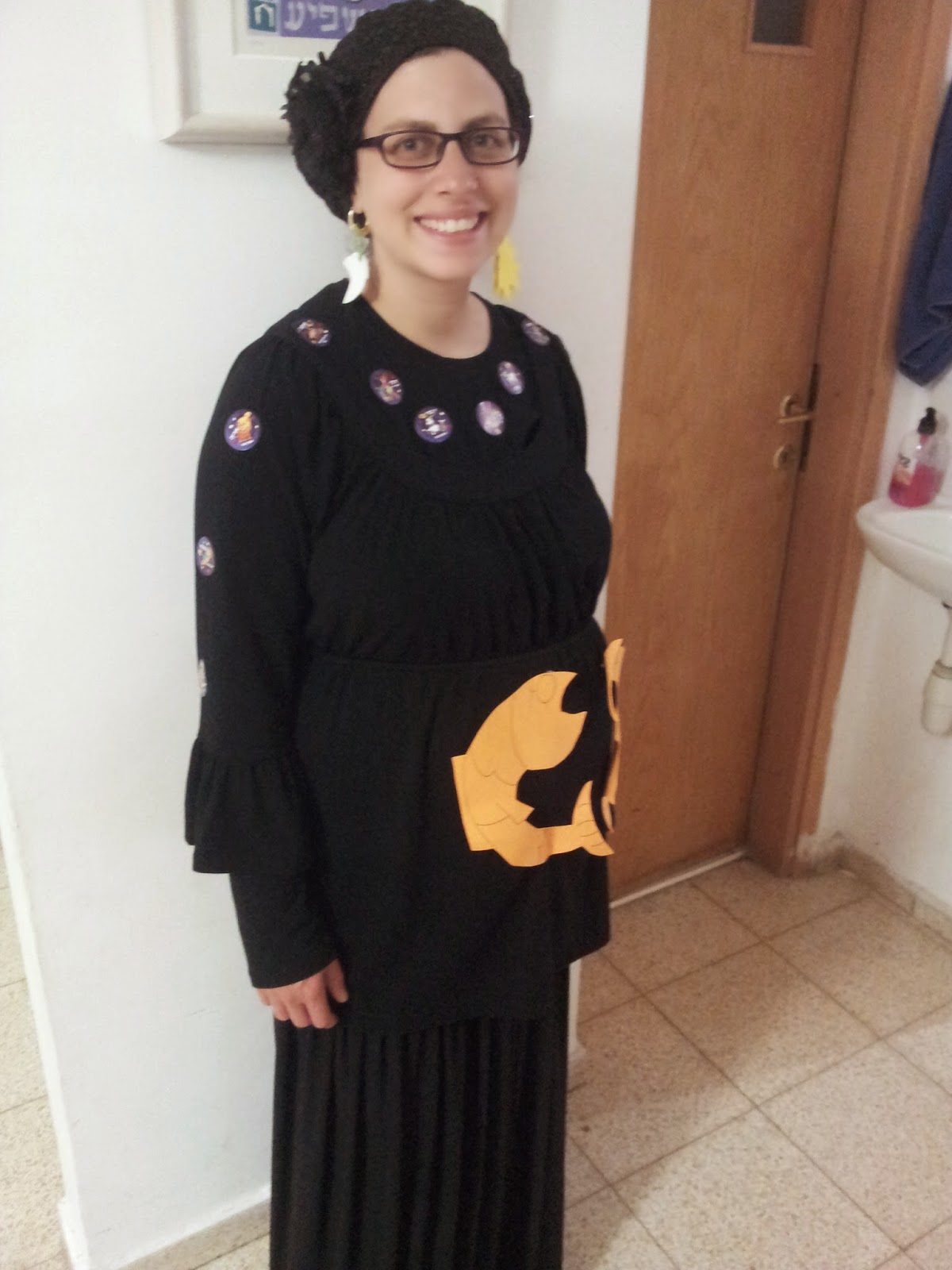 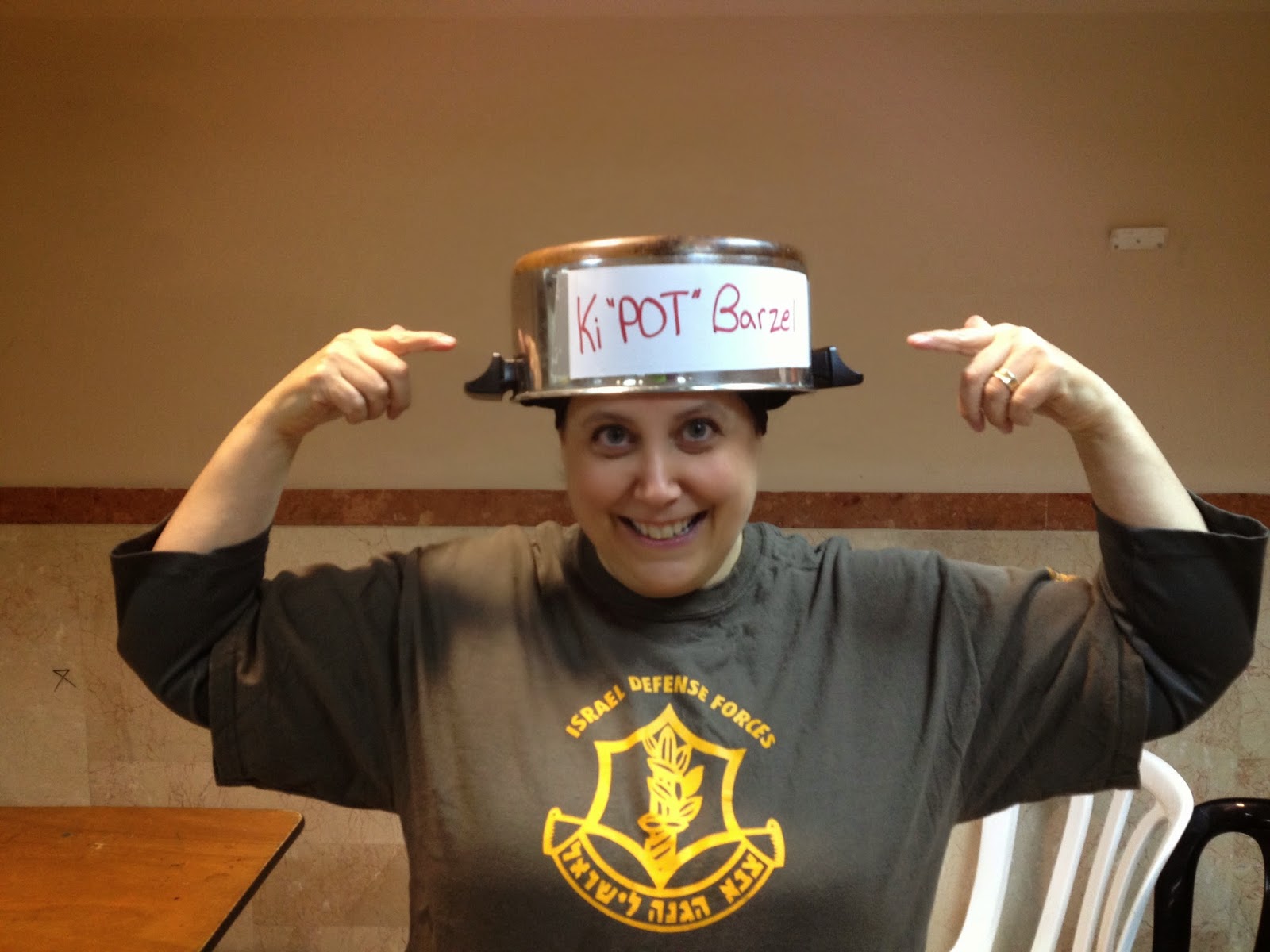 This one is... wait for it... a pop quiz.
Okay, this one had me scratching my head for a bit, but I think I got it. The caption is Gar'in Torani, which is a group of idealistic, young, Zionist, religious families and singles who move to a community together to try to strengthen the community's level of Jewish commitment. Gar'inim is also the Hebrew word for sunflower seeds. So this is a sunflower hat with sunflower seeds that look (to me) like a community of people. The tzitzit on either side is a symbol of the religious identification of the Gar'in Torani.


Some costumes have an only-in-Israel political flavor. And in Israel, politics is generally bundled together with religion.

This one is a reference to the current culture war between those who serve in the Israeli Defense Forces and those who don't. In Hebrew, this concept of social equality is called shivyon b'netel. Instead of b'netel, his sign says, "The people seek equality "b'petel!" Petel is an Israeli brand of concentrated drink mix. Notice the two bottles he's carrying around his neck. The one on his left is dressed in an army uniform and the one on his right is dressed in a black hat and the black clothes associated with the Charedim who generally oppose serving in the IDF.


On a similar note, here's DH dressed as "Charedi Chaim from Yereeshalayim" who is completely against the idea of yeshiva students being drafted and required to serve in the Israel Defense Forces. He's holding volumes of books that yeshiva students study and his signs say:

NO DRAFT (only beer)
NOT DYIN' FOR ZION
No Uzis. No Floozies. Just me and my Chavruzees.
(Uzis are submachine guns. Floozies is a tasteless reference to women and chavruzees are actually chavrusas or chavrutot which means partners with whom one studies Torah.)

One more on this same theme. This is Sandy Honigsberg dressed like someone opposed to service in the Israeli Defense Forces and in favor of continued government subsidies for yeshiva students. His sign says, "God is proclaiming, 'Death to Tzahal. Where is my money?'" Tzahal is an acronym for the Hebrew words Tzva Hahagana LeYisra'el which refers to the IDF.

This is our neighbor wearing an ironic t-shirt. It has very short sleeves and the words, "It is forbidden for Jewish women and girls to dress in immodest clothes," emblazoned across the chest. 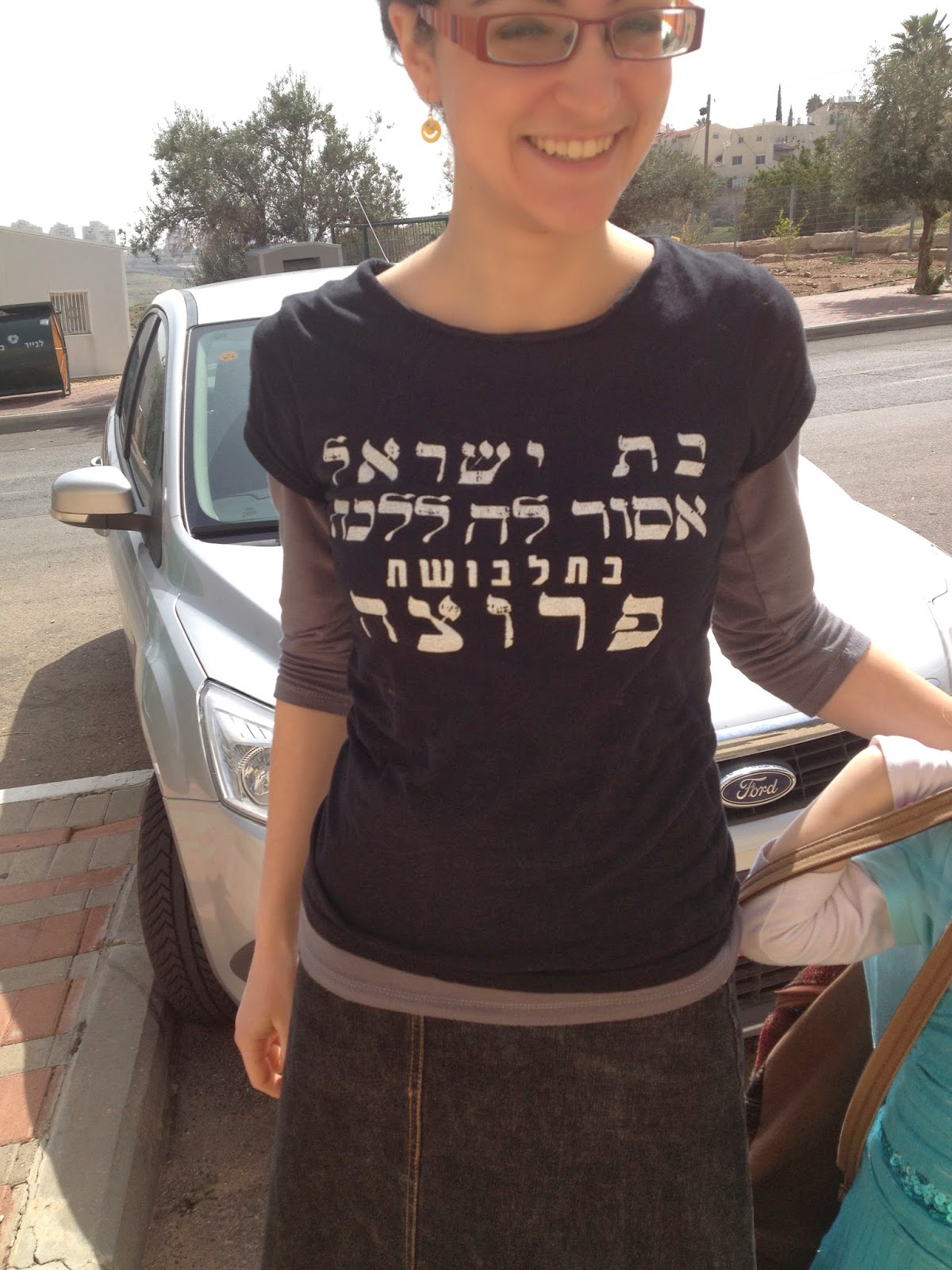 Another neighbor is dressed as a member of Women of the Wall, a group of Jewish women who wear prayer shawls, pray and read from a Torah scroll at the Western Wall in Jerusalem. 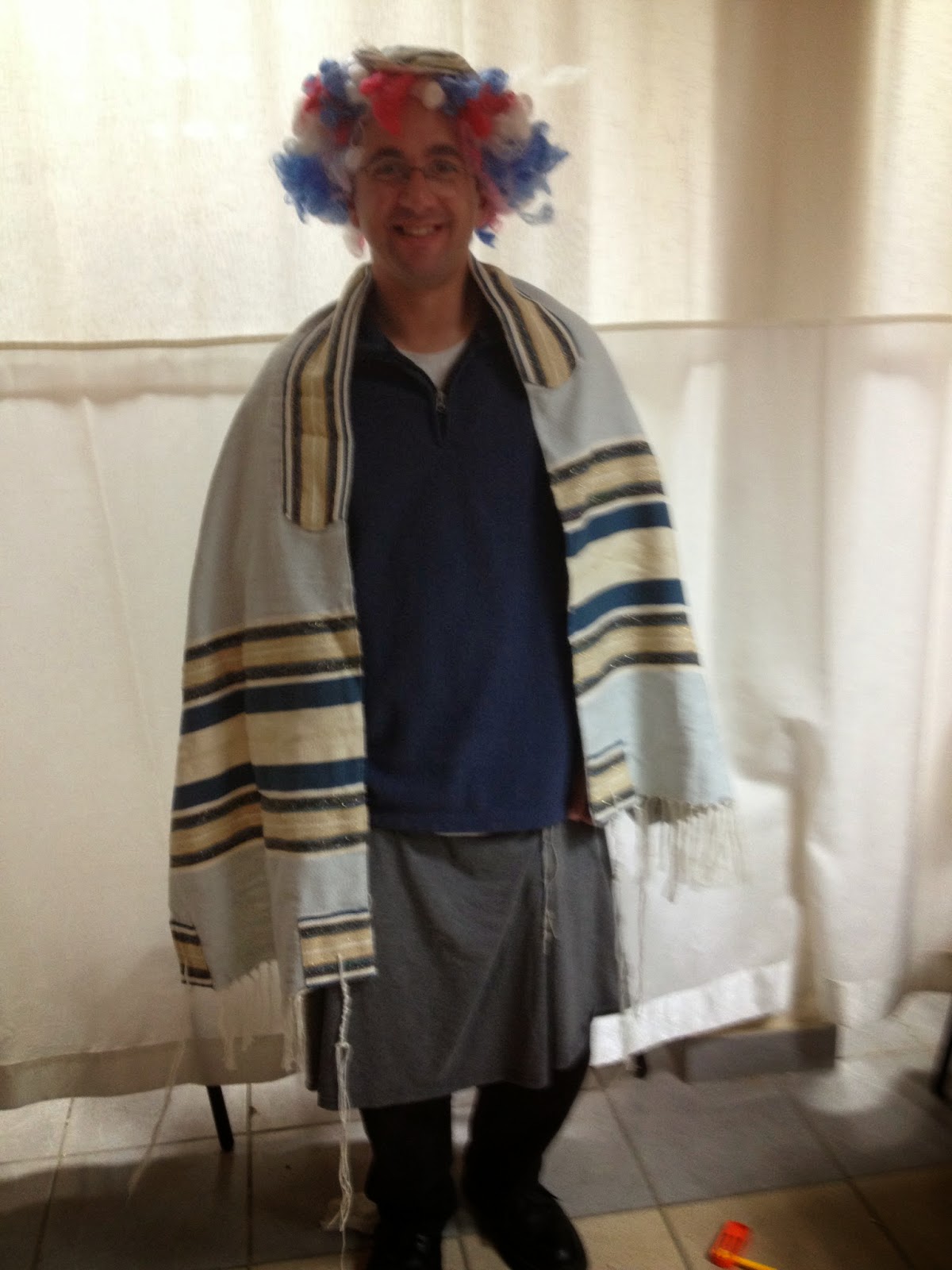 And just to end on a lighter note, here's my newly married daughter and her husband as Mario and Princess Peach. 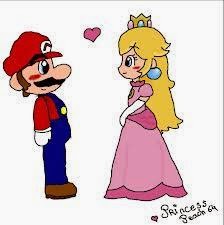 Just kidding. Here they really are... 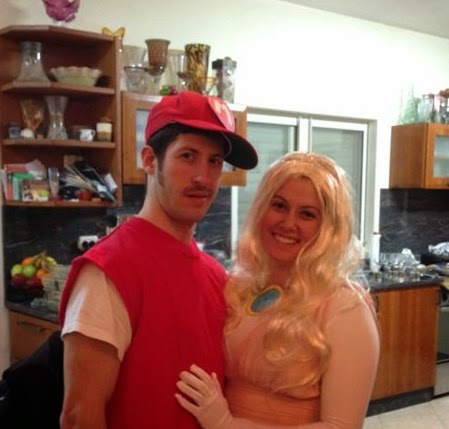 And because they are just so adorable, here they are again: 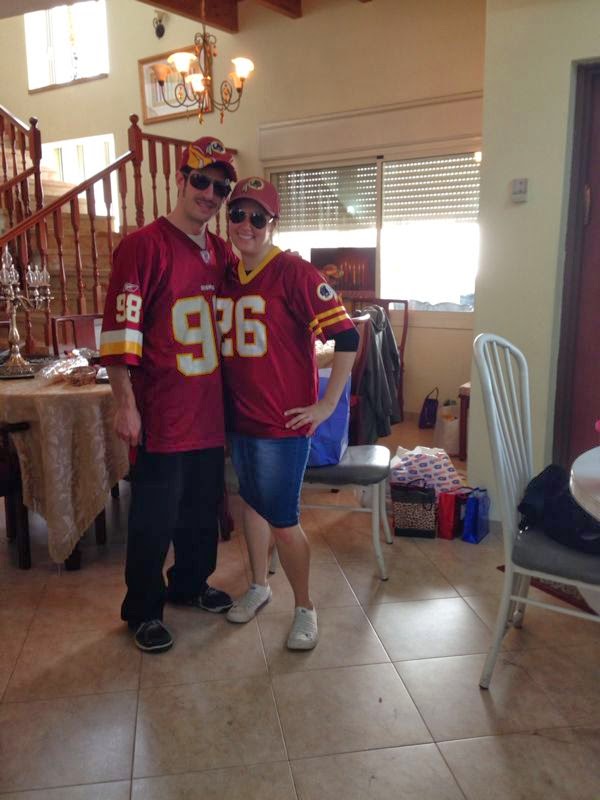 Hope you had a great Purim!
Posted by Rivkah Lambert Adler at 12:06 AM