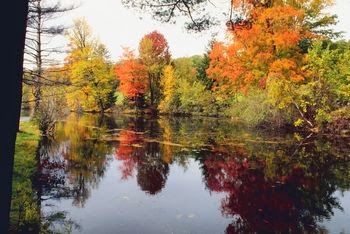 I do enjoy shul much more since I now have a front row seat and can see and feel connected to what's happening downstairs. And I don't want to be halachikly obligated to all that men are supposed to do. Isn't life full enough? Mine is. In my shul I can sing loudly, and nobody seems to hear me in This World.
Ruti's well prepared for this, considering that she describes her profession as "raising a crop of boys."

ותלמוד תורה כנגד כולם -- learning Torah, teaching Torah. (in response to what may be the most potent route for many Jews -- male or female, and definitely mine -- to connect with the Divine)

As Batya points out, my "thing" -- given to me by God -- is to raise "crops of boys." I have sent them out the door with the words "Daven well; bring Mashiach!" for decades... and then happily enjoyed the testosterone-free spiritual sanctuary of my own home, where I can converse joyfully (or sadly, or argumentatively, or spiritually) with God, at my own pace, partly in my own words.

We each bring the Geula in her or his own way. I'm so very contented with mine. May each woman find her path to spiritual self expression, individually and as part of the Jewish people.

Have you attended Orthodox shuls that truly embody "separate but equal," like Kehilat Yedidya in Baka? an open room, full of light, mechitza exactly down the center. Women say kaddish and are answered. Women can carry the Torah on the women's side but it's not a partnership minyan like Shira Chadasha. All divrei Torah are given from the front of the room, equally visible from both sides.

Simchat Torah there is just divine. Women don't have to read Torah or get aliyot if they don't want to, but can definitely dance and sing with several sifrei Torah.

I also can't go to most shuls because I leave feeling angry instead of spiritual. However, good shuls DO exist! It's up to us to make them more a norm and less an exception...

This makes me sad. I feel so unwanted by judaism and can't find a way to get past that. Although I do enjoy the partnership minyanim, they just aren't anywhere near where I live.

I invest my feminine spiritual energies in compassionate outreach to cholim. Females are more oriented to doing H' will, and Av HaRakhamim is one of Her/His names. So, I do what I can to open public awareness to healing and coping possibilities. I even use the Spiritual Healing techniques for which I'm certified. They tend to excite people to the possibilities of being receptive to H's help.

That's my comment about helping cholim, above. I apologize that my name & photo did not appear. I must have pressed the wrong click.

Loved this article, Rivkah. I hate to admit this, but when I go to shul, I don't go for the spirituality of it, but for the camaraderie. Is it awful that I go to see my friends--to get and give support? I try not to talk because I am aware that that disturbs others, but being there together and then hanging out afterwards is always a joy for me. I also go to support my husband, who of late has become active and sometimes makes announcements or the like.

Another thing I do: I say Bircat HaShachar every morning, and when it comes to the bracha "sheh-asahni kirtzono", I always add "sheh-asani isha". It takes away a teeny bit of the sting of the male bracha, "sheh lo asahni isha". A teeny bit.

The "women's" mitzvot do a lot for me. I spend a long time talking to G-d after I light Shabbat candles. When I take challah, that's an opportunity too. I try to create it when I can. I try to be 'in tune" with Hashem at all time, and try to be perpetually grateful. As I get older I go to Mikvah far less than I used to (b'H) but this, too, is an opportunity to connect. Heck, Modah Ani in the morning starts my day connected.
And Ruti taught/reminded me (of) the tremendous power of "shehakol nihiye bidvaro." Finally, I try to push down my ego and accept that I'm just a simple servant, just as our matriarchs were. We serve Hashem, and whatever I'm going through I try to react in the way that seems to me to most give Hashem nachat ruach.
Love you, darlin'.