Kfar Chabad: A Photoblog with Commentary 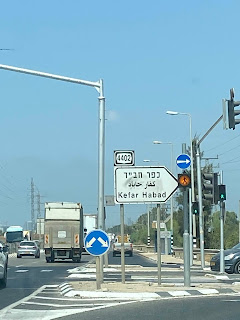 With summer drawing to a close and many responsibilities of the New Year looming, my husband and I took a few hours off and drove north to visit Kfar Chabad (also known as Kefar Habad :-) today. Neither of us had ever been there and we love exploring new places in the Land of Israel.

As we entered Kfar Chabad, my first thought was, "All Rebbe. All The Time." 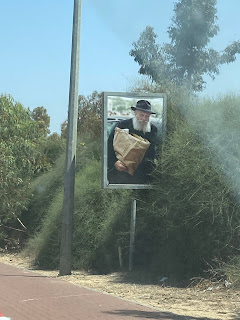 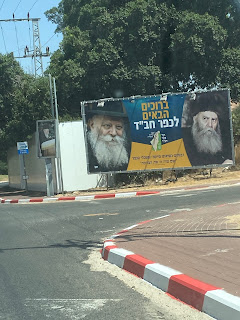 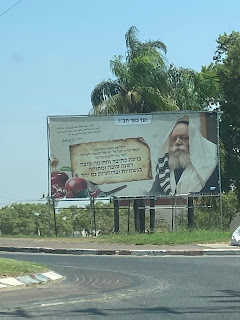 Our first stop was the replica of 770, the World Headquarters of Chabad-Lubavitch movement, located at 770 Eastern Parkway in Crown Heights, Brooklyn. 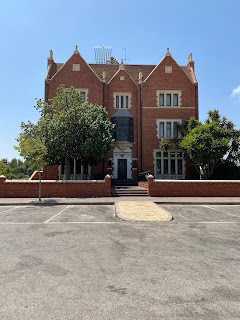 Here is a close-up of the front entrance. It's hard to see in this photo, but it says 770 in the white tile on the lower right, two tiles up from the top step. If you're reading this on a phone you can pinch the photo to get a closer look. 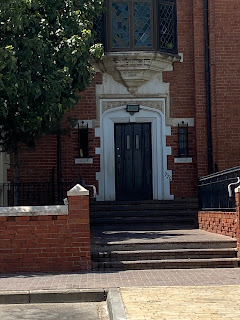 Below the stained glass window above the front door, it says Beis Agudas Chasdei Chabad - Ohel Yossef Yitzchak Lubavitch in Hebrew then in English. 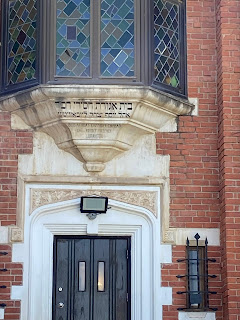 We weren't sure if we were allowed to enter, but a kind man who was headed inside told us it was fine. Turns out there's a sort of guest reception room as you enter on the right. The man in charge of welcoming guests told us that the Rebbe instructed his followers to build this replica in 1986. He invited us to sit down and watch a video of the Rebbe speaking about the importance of Eretz Yisrael and of him giving brachot to people from Israel who went to see him during Sunday Dollar Days. 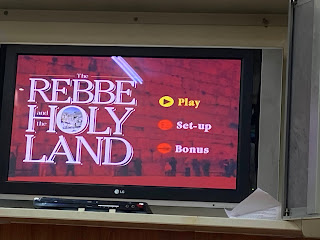 I was especially moved by the clip of a family who approached the Rebbe during Sunday Dollar Days during the Gulf War in 1991. The father said the family was supposed to visit Israel for their son's Bar Mitzvah but the boy's mother was afraid to go. The Rebbe urged them to have no fear. That advice truly resonated with me, given the precarious state of affairs in Israel today.

In the same room as the video, in between welcoming guests, our host, who was also a sofer, was writing a Sefer Torah. 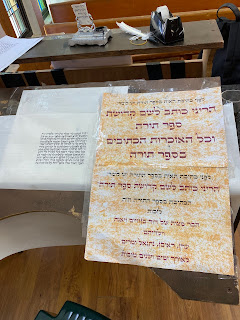 He offered us a very special privilege. Although the Rebbe never visited Israel and never physically entered this building, there was a room set up for him that they call "The Rebbe's Room." Our host unlocked the room for us and allowed us to sit in there and recite a few chapters of Tehillim and just speak to Hashem.

Even though I know the Rebbe was never actually in that room, I felt an unanticipated sense of awe and reverence entering the otherwise empty room, and a sense of real privilege to be allowed to pray there for a few minutes. 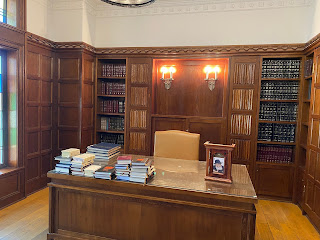 Since it's so close to Rosh Hashana, our host offered us another once-in-a-lifetime opportunity to write a kvittel (a note) that would be brought to the Rebbe's grave in New York. In my husband's hand, we asked for healing for family members who are ill and for blessings of health, shalom and parnassa (livelihood) for us and those we love in the upcoming New Year.

Before we left 770, our host had one more chavaya (experience) for us. He returned to the table where he had been writing a Sefer Torah and asked for our Hebrew names. My husband's Hebrew name begins with the letter alef, and the very next letter he was writing was, indeed, an alef.

He wrote two more words and then asked me my Hebrew name. When I told him the first time, for some odd reason, I left off my second name. He asked again, and he showed me that the last word he wrote had a resh and a yud which are my Hebrew initials. The word also has a gimmel and a lamed, which are initials in my father's (A"H) Hebrew name. This is the word he "just happened" to be up to while we stood next to him at his writing table. 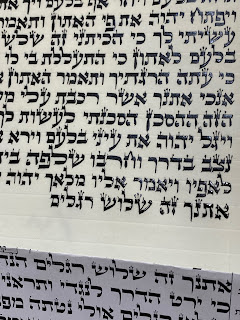 I knew there was a bee farm in Kfar Chabad because I had written about it years ago when I did some work for an Israeli tour company.  We weren't so interested in the children's activities (or seeing bees up close and personal to be honest) but we wanted to visit the honey store on the site of the bee farm, so from 770, we drove around until we found it. 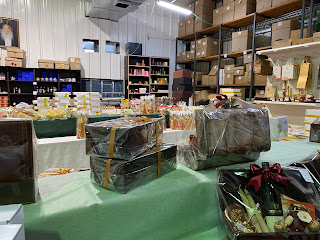 The store is in a quite unassuming location and is filled with honey-themed gifts for the New Year, like these honey-filled candlesticks and beeswax candle gift packs. 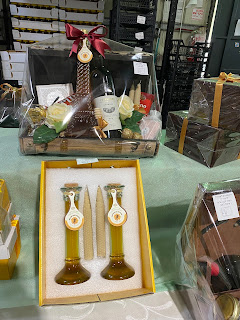 We ended our visit with a quick lunch at Zalman's Pizza Bar where we saw a young boy wearing a Yechi Adoneinu kippah. Hamaven yavin is all I'm going to say about that. 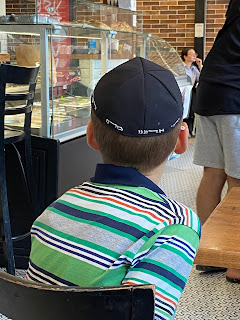 One final image. Across the road from Zalman's was another dairy restaurant called Gitteleh... 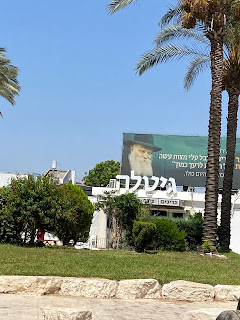 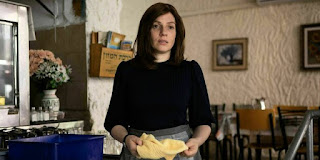 The whole excursion, including travel time, took us five hours and we left feeling that, however briefly, we had entered another world, one where God and Torah and tzedaka and acts of kindness are palpable. All in all, a fine outing for Elul. Highly recommended for locals and for tourists, as soon as Hashem allows the borders of Israel to reopen.


* Just kidding. There's no connection. I was just trying to be clever.