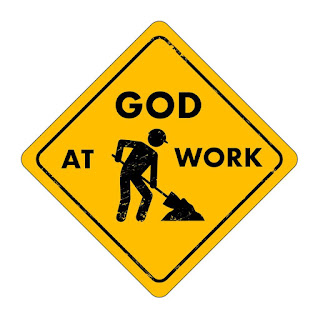 In the book Bee Season by Myla Goldberg, an 8 year-old Jewish character named Aaron Naumann sees a small flashing red light in the midst of the nighttime clouds during his first plane ride. He doesn't understand that it's coming from the wing of the plane and he thinks it's G-d showing Himself.

From the far distance of America, even though I kept the same mitzvot as religious Jews in Israel (more or less), I knew something was missing. And I knew it had to do with G-d. When I came to Israel, I wanted to feel G-d more in my everyday life.

Even though it sounds cheesy in English (e.g., נפשי חולת אהבתך translates as "my soul is sick for Your love"), the prayer of Yedid Nefesh, which speaks of the soul's desire to be close to G-d, rang true for me.

I am always moved when friends talk about G-d as if He is a factor in every aspect of their lives. Didn't get the apartment we were hoping for? G-d must have something different in mind. There's no such thing as a coincidence. What we call coincidences are G-d's way of making Himself known, as this story by dear friend and fellow blogger Ruti Mizrachi illustrates. Everything, everything, everything comes from G-d and it's all good.

That's my truest core. And I need this perspective to breath.

But, because I am part of the clodden, earthbound world, I get distracted. And I start worrying about money, outcomes and all sorts of other things that are, in truth, out of my control.

Twice a year, I coordinate an English book swap and sale, captured in words and pictures by yet another dear friend and fellow blogger A Soldier's Mother. Besides providing cheap books for English readers, it also raises thousands of shekels for tzedaka. Dozens of volunteers do everything - from picking up donated books to taping signs on tables to sorting books into categories to making change. The hardest volunteer job to fill is always the movers - the ones who tote 100+ cartons, bags and boxes of books from multiple locations in the neighborhood to the event and to move the leftover books out after the event is over.

This year, two stalwart mover volunteers were unavailable and I started to panic. I wrote dozens of emails and Facebook posts begging volunteer movers to please, please help. At one point, like a woman in hard labor who swears that she will never let her husband near her again, I pledged that this would be my last book swap. That's how discouraged I felt.

After I sent my volley of begging, pleading emails, I said, "I've done everything I can. G-d will have to step in and make this happen." I said it, but inside, I still felt responsible. And I imagined injuring myself in the process because, in the end, I was going to have to schlep 100 cartons up and down steps pretty much by myself.

What actually happened is that more than a dozen people showed up to help. Every carton, bag and box was transported from two houses at different ends of the neighborhood into the event hall in under 35 minutes.

And I knew that only G-d could have done that.

I'm not where I want to be with this. I still have plenty of learning, plenty of G-d work, yet to do.

It comforts me to know that, at the very least, by living in Israel, I'm enrolled on the right campus.

May all of us experience such spiritual clarity.

My husband and I have $50 in saving and a bill was coming due for $235 dollars - it would be taken directly out of our checking. In our checking we had about half of what was due, payday a week away. We talked about it and comforted/reassured each other because we knew this was a situation when faith in Hashem is a necessity. The fear was going into a negative balance and draining our pittance in savings. But thank G-d I was able to bake enough bread and my husband sold something he didn't need. And it came out we made enough with $25 over till pay day. Give up the worry for the sense of peace faith in Hashem brings.

I cannot think of yedid nefesh and cheesy in the same sentence. This is a song so filled with the longing to be close with the One that it hurts. May we all merit to feel Hashem's closeness with every turn we take. May we feel His hand holding ours equally when we win the lottery as when we lose our shirt. Although it may be a local call here, most of us still are working on refining our senses in this area and hence this heart melting song --Yedid Nefesh---praying for us to be pulled closer to the Source of all Good. Thank you for your post reminding us of this.

Thank you so much for introducing me to this version of my favorite love song. I hadn't heard it before. Thank you even more for the way you illustrate the longing for closeness with Hashem in your own soulful striving for trust that Abba's arms will catch you, if you merely let go and let yourself fall. Finding the balance between hishtadlut and bitachon will always be a lifelong process for me. Glad we're in it together. :-)