My Father Sent Me


There's a Hebrew expression,"Maasim Avot Simanim l'Banim " which translates as "deeds of the fathers are signs for the children." The concept refers to the idea that what one generation does has an impact on subsequent generations.

The day that just passed was Shavuot, the anniversary of the giving of the Torah on Har Sinai. Shavuot is one of the four times a year when we recite Yizkor, the memorial service for deceased parents, relatives, martyrs and members of the Israeli Defense Forces who died in service to the nation.

I didn't start saying Yizkor until my father passed away in 1994. But now I say it for my father, all four of my grandparents, an aunt and my friend Janis who died in the bombing at Hebrew University on July 31, 2002.

Because there are so many names, I don't trust my memory, so I keep all the Hebrew names (as well as the names of each person's mother and father) written on a card which I keep in my siddur.

My mother tells me that I am named for her father. His Hebrew name was Reuven, which shares two letters in common with my name, including the initial resh. That was the custom of my parent's generation - to at least retain the initial letter of the family member after whom a child was named.

About eight years ago, a distant family member sent me a photograph of the headstone at the grave of the parents of my maternal grandfather, my great grandparents. From that picture, I learned that my grandfather's mother's name was Henna Rivka. And from that knowledge, I felt more connected to my name than ever.

After I finished saying Yizkor, I went looking for the photograph of their headstone among a box of very old family photos.

I didn't find it.

But I did find something else. 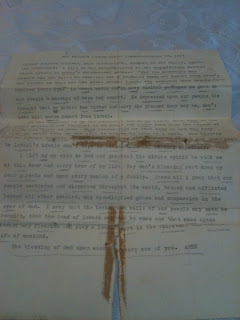 This is the original text from which my father delivered his bar mitzvah speech. And it reads, in part:

The history of my people teaches me moreover that only by loyalty to Israel and fidelity to Israel's ideals can I hope to achieve true and lasting happiness....

Above all I pray that our people scattered and dispersed throughout the world, tossed and afflicted beyond all other peoples, may speedily find grace and compassion in the eyes of God. I pray that the broken down walls of our people may soon be rebuilt, that the land of Israel may soon be ours and that once again Israel may flourish and play a leading part in the spiritual and religious life of mankind.

My father's speech was delivered on October 18, 1947. Barely a month later, on Novemember 29, 1947 the UN approved the United Nations Partition Plan for Palestine with a vote of 33 countries for, 13 against and 10 abstentions. The birth of the State of Israel had begun.

Maasim Avot Simanim l'Banim. Sixty-five years after my father spoke a prayer that Israel be restored to its proper place among the Jewish people, his daughter and granddaughter would sit on a couch, seven kilometers from Jerusalem, and discover his words for the first time.

How did I come to merit a life in Israel?

My father sent me.

How very lovely! You are your papa's girl. I think he must be very proud.

Thank you for reminding me of how bound we all are to Eretz Israel and Sinai this and every Shavuot. Yizkor is always bittersweet, reminding me of all who have been scattered to the winds of the Diaspora, yet are always close in memory and spirit.

I enjoyed reading this, thank you for sharing. It is interesting, just recently I asked myself the same thing -- how/why did I merit to live in Israel? I try to make it a habit to enumerate or list all the good things in my life -- in an effort to counter any negativity in my life, to eradicate it, to take power away from it so it cannot harm me. One of the things I have been grateful for has been the opportunity to live in Israel, to have made aliyah. But recently, I did wonder, in what merit did I deserve that? Your post got me thinking. I think I could credit my mother with this -- when I was a very young girl, and Israel was some far off land, ancient and ethereal to my mind, my mother told me how she had always dreamed of going to live in Israel -- ever since she was a young girl. It made me realize that ancient, ethereal, far off Israel was not so -- it was real and tangible, even though I was unable to feel it myself. I have carried that with me ever since she shared that with me. It was the seed that grew into a dream, a desire, a yearning, and that I only recently fulfilled. I only wish my parents would come to live here...

Rivkah, that was quite a blog! Sometimes we don't get the blanks filled in and have to wait until 120. Your dad wrote it all out for you. He must be kvelling!!!
have a good week
Beth

beautiful post
He must be so proud and happy you're here.