When Women Pray Out Loud Three years ago this month, I wrote about a powerful spiritual experience I had with a group of Jewish women I had never met.

It was early one morning in Medzibuz, Ukraine. I walked to the tziyun of the Baal Shem Tov to pray.

As I walked alone down the path, I heard women singing. It was very loud. I opened the door and I saw, right away, that it was overheated and packed beyond reason. There must have been a hundred women in a room that's about 400 square feet, standing wherever they could, amidst six large kevarim.

I was about to turn away to leave when the arms of a stranger pulled me in. And I entered something unworldly. A hundred women were chanting.

Twenty-four times they sang this verse from Tehillim. 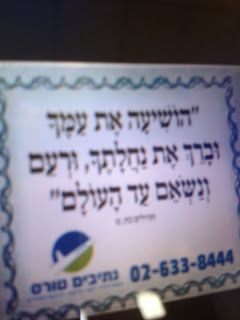 Hoshia et amecha uvarech et nachalatecha orem v'naseim ad haolam.
Save Your nation and bless Your inheritance. Tend them and raise them up forever. (Ps. 28:9)

Over and over, louder and louder, hands raised to the heavens.

Beside me, an old woman put her hands on the head of a young woman. A bracha that the young woman should find her zivug flowed from the old woman's lips.

After the 24th repetition, the prayer leader signaled the end.

Tears sprang up in my eyes. I heard weeping all around me, saw the precious faces of women I didn't know, wet with tears.

The collective prayer of these women raised me to transcendence. I was no longer in rural Ukraine. I was somewhere else, somewhere higher.

This is the power of women at prayer, when we are free to pray out loud. The lack of this has been a painful deficit for me for a very long time. I came to Ukraine and found it there.

My husband and I traveled to Tiveria with one of my Torah teachers. She and I were hoping for a brief, private meeting with Rabbanit Leah Kook. Rabbanit Kook is married to the mekubal Rabbi Dov Kook and is the granddaughter of Rebbetzin Batsheva and Rabbi Chaim Kanievsky. 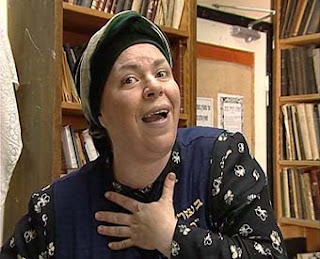 We were told that the Rabbanit has kabbalat kahal, where she meets the public, from 6-7 PM. We arrived in Tiveria just before 6 PM and located the address we were given. We walked through a gate, down a dark path to a locked door. 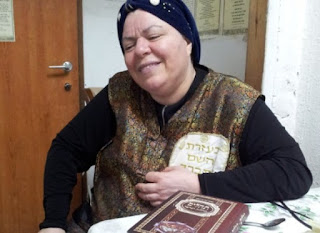 There was one other woman already there waiting. Within a few minutes, two other women had arrived, including one older woman completely covered, except for her face and hands, in a shimmery grey cloth.

More women came in while the Rabbanit stood by an interior door, held onto the doorpost, and prayed.  I was in that small room for about 35 minutes and I was completely, utterly and uncomfortably out of my element.

It didn't become clear until just before we left that we weren't going to be able to see her privately. Instead, we got a window into the power of what Jewish women's prayer can be when there are no men around.

It seemed to me that most of the women were regulars who knew exactly what to expect. I, however, was nothing if not dumbfounded. I felt like the most ignorant Jewish woman in the history of the universe. While the 15 or so women recited some text in a distinctive, unified cadence, patting their thighs to keep rhythm, I struggled to figure out what they were saying. Eventually,  nafal li ha'asimon (the penny dropped) and I realized they were reciting Tehillim.

The Rabbanit screamed Toda Abba! (Thank You Father!) a dozen times. She shouted Anachnu ohavim otach! (We love You!) over and over. And when she closed her eyes and screamed Moshiach! thirty times or more, I knew I had never seen anyone pray this way.

One woman brought a small vial of scented oil, which was passed around. Each woman said the bracha borei minei b'samim, blessing God for being the Creator of different types of fragrances, to which everyone else answered amen, before breathing in the scent. Brachot said out loud seemed to be a big thing, because the Rabbanit gave out cups of water and each woman who took one made a shehakol out loud, again with everyone answering amen.

The Rabbanit went back into the kitchen and brought out a large metal bowl, dinged from much use, filled with dough. In keeping with the mood of the room, she made the bracha for taking challah loudly. Then she did something (okay, yet another thing) I never saw before.

She took the bag with the challah that she had broken off and rubbed it on her knees and on her eyes and said, lo ko'ev (it doesn't hurt/it shouldn't hurt). Then she passed it around and everyone had the chance to rub the bag of dough on the part of her body that needs healing.

Everything I saw was so otherworldly that I'm sure I don't remember the exact sequence. I do remember that Tehillim 20 (Lamnatzeach Mizmor L'David) was recited at least 12 times, over and over, with the same cadence, the same specific emphasis on the final words Hashem hoshea haMelech.

When I agreed to go to Tiveria, I had no clue about any of this. Today, I have a completely different awareness of how one's relationship with Hashem, and with tefillah, can be.

Even if one is a woman.

Powerful stuff! I would only say that it's BECAUSE of the women, rather than even though, having been privileged to witness some remarkable prayer from remarkable women. Thank you for sharing!

Very cool stuff here. I'm grateful that you described your experience. It's a window into a world I've never seen.

If I had access to tefillah like this, shul would become utterly irrelevant to me. If I had been exposed to the power of women praying out loud earlier in my teshuva process, it would have been so empowering and would have saved me from a boatload of frustration and resentment

Rivkah, I know you wrote that last comment (11:44) a while ago, but that is a pretty big set of "if"s! Try it this way instead: If you'd had access to such tefillah, perhaps you wouldn't have been ready to benefit from it. If shul had become utterly irrelevant to you, perhaps you would have missed out on a fundamental part of your teshuvah. If you had been exposed earlier in your teshuvah process, perhaps you would have developed in the wrong direction. Perhaps that boatload of frustration and resentment is intended as a lesson for you, and you won't be able to fully engage until you come to peace with that part of your ego. Perhaps you might even consider that HaShem doesn't make mistakes!