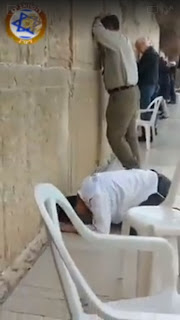 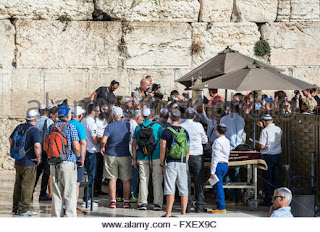 The mehitza now has a fold-out platform for the women to stand on. No more plastic chairs. (Yay. -- yes, that cheer is sarcastic.)

The reason why the space at the Kotel is not equalized, according to Rabbi Shmuel Rabinowitz, the government appointee in charge of the Western Wall and the holy sites, is that one does not diminish the holiness of a place (in this case, by taking part of the men's section and making it part of the women's section). He wrote a nine-page responsum on this, by the way. Still, the mehitza is opened during Sukkot and Pesah and a temporary mehitza put in to its left in order to give women more space. (I wonder how he justifies that.)

The men have a great deal of indoor space in an area called Wilson's Arch. The women have a corridor leading to Wilson's Arch for a few hours per week, usually at times that are not convenient.

There is a women's balcony above Wilson's Arch that has one-way glass, curtains, and earphone jacks so that women can listen to bar-mitzvah services taking place below. Men may enter the space unchallenged, but no woman may set foot on the ground level of Wilson's Arch. If she does, she will be threatened with removal from the area.

Who does the threatening? Employees of the Western Wall Heritage Foundation, who act like a shadow police force at the Kotel. They wear no identification, but they act as if they rule the place -- because, at present, they do.

There is some more information in an article I wrote a few years ago, at this link: http://www.haaretz.com/jewish/features/.premium-1.574506

Thank you Rivkah! I see this as part of our Tikkun Olam. How might we correct or remedy our quandary? There are many Jewish and non Jewish men who are equally opposed to these policies. There is always a middle path to take...

I feel the same way. I so wish the Kotel could simply have national monument status, like Masada and other places. I can hardly stand going to the Kotel as it has come to symbolize a Judaism that is divisive and cruel. But maybe that's appropriate. It is that division and cruelty that led to its destruction 2,000 years ago as well.

Thank you. I feel the same way. It's depressing.

Thank you for this post. I feel the same way and while the situation is like this, nobody and nothing will induce me to go and visit the Kotel, so will probably need to wait for Mashiach 🤔.

I have no trouble visualizing the Beit HaMikdash however the Kotel experience leaves me cold. I can never concentrate as well as when I am on the bus. I learned to say a passuk from you and it is really special to me. I never want to forget where I am even on my way to the rest of my life in Jerusalem.

I hate having plastic cups shook in my face and I find it just too sensory overloaded to properly pray.So I will go when it works out but I don't have a yearning for this experience.

interesting.. I used to go to the kotel for the experience of the japanese man and somehow have stopped going and did not know why..you have clarified that for me for although i am traditional and do not look for the new experience women would like to celebrate at the kotel i admire them for their wishes , to be a part of the religious ceremonies there. meanwhile i would just like to add something.. i understand from my rav that the kotel is a place of judgement, maybe the fact that the mens section is larger reflects the need for men to be judged rather than women...

I have a huge amount to say about this post Rivkah, but I will try to keep it simple.
1. There ARE Jews of Japanese descent. Not many, but some. (And at least one has become an Orthodox rabbi.)
2. The man prostrating himself is wearing both kippah and tzitzit. So I think maybe you misidentified a Jew as non-Jewish.
3. Some parts of your criticism are valid. But some parts are clearly a chillul HaShem to post on a public blog.
4. If you feel this way, fine, but realize that these are "feelings" rather than set facts. What about seeing these things from the opposite side? How about talking with some women who are HAPPY with the status quo at the Wall? Further, instead of just looking at it from the "Women of the Wall's" perspective, try having a conversation with some members of "Women FOR the Wall". It might not only open your eyes but possibly even change your feelings. You never know until you try!