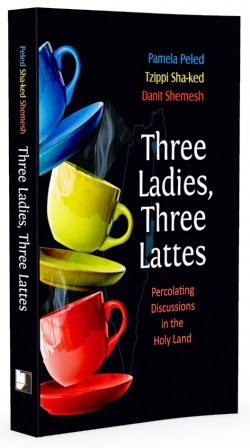 This new book, written as a chronicle of 16 months of meetings among three women in Israel, makes for compelling reading.

The three authors. Pamela Peled, Tzippi Sha-ked, and Danit Shemesh all grew up outside of Israel and made aliyah.

Pam is the bare-armed, profoundly Jewishly-identified, traditional but not strictly religious voice. Her Jewish identity is so deep, it just wouldn't be correct to call her secular. Hers is, without a doubt, the loudest voice in the book.

Danit is an interesting mix of an American, ba'alat teshuva, Haredi woman.

And Tzippi, who convened this group, is the Hardal/Dati Leumi representative. Ironically, when I attended the book launch event, Tzippi was wearing a sheitel and Danit a mitpachat, which I initially found disorienting.

The book compels, even as it repels. Not to put too fine a point on it, Pam sees and says nothing nice about Haredim and thinks they will be the ruin of Israel. Danit thinks the ideal solution is to let each group do what it's best at. So she claims Torah for her community and offers Religious Zionism to the Dati Leumi world. The secular, according to Danit, can rule the domains of work and army service.


This is a sad, sad book. Reading it is like being a voyeur, like watching someone else's domestic dispute.
DH has a derech eretz strategy for talking with people with whom we disagree. Saying, "I see your point," goes a long way toward making the conversation more civil, even if we never agree. Sadly, Danit never answers Pam's multiple and forcefully expressed objections to the way the Haredi lifestyle impinges on the rest of us. Danit's comments turn around the central point that, having looked at other options, the Haredi life is the best choice for her. Only Tzippi, perpetually caught in between two warring sisters, acknowledges others' points.
I liked all three women. I admire their individual and collective bravery. Each makes points with which I agree and statements with which I disagree. And it's clear that, against all odds. they genuinely like one another.

At the conclusion of the book though, it feels that nothing was accomplished. No one is kinder to, or more accepting of, Other.

At the book launch, Tzippi told me her goal is to carry this conversation into the broader Israeli society through cyberspace. I told her I didn't think that was a realistic goal. In cyberspace, the conversation will deteriorate in a nanosecond. If three women who genuinely like each other and met face-to-face for 16 months couldn't reach a rapprochement, what chance do strangers have?

Tzippi's goal is a noble one. And I don't know what the answer is.

Read the book yourself. Then at least you and I can sigh together.