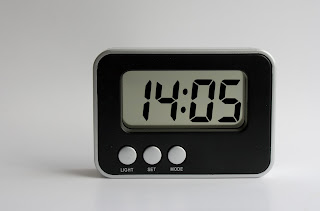 Making aliyah is definitely easier if you're coming from anywhere else in the world where the metric system is already in use. But when you're an American, used to pounds and ounces and feet and miles and dollars and writing MM/DD/YY and AM/PM, it's disorienting.

My smoothest adjustment was buying food in kilos instead of in pounds. It wasn't that hard. A kilo is 2.2 pounds, so it was pretty easy to do the conversions in my head.

I would like to say that, once I started earning shekels, I stopped thinking in dollars, but that's not really true. I just learned to stop doing it all the time. And I learned that sometimes, it's best not to attempt a conversion. Like when ordering a bowl of soup in a restaurant in Israel.

A life lesson for new olim: DO NOT convert the shekel price of a bowl of soup in an Israeli restaurant to dollars. Just don't do it.

For awhile, I had my iPhone's weather app set to Celcius.

And I used this little ditty that I learned from an old friend and fellow blogger as a guide:

But I switched back.

Because Fahrenheit is so much more precise.

And doesn't require me to do any conversions in my head.

I have to be honest. I really resisted giving up the AM/PM thing. I hated that I couldn't find an AM/PM digital clock to buy. And it annoyed me when people would schedule an appointment for 16:00. Why can't they just say 4 in the afternoon? I didn't like the way 16:00 taxed my brain.

Does it sound like I'm whining? I don't mean to. It's just that there are so many things you have to relearn when you make aliyah. I kind of resented having to relearn how to tell time.

Recently though, the time thing began to make sense.

Once, when flying internationally, my husband and I confused AM and PM on the itinerary and ended up with a 14-hour overnight layover instead of the 2-hour late morning layover we were expecting.

The 24-hour clock makes sense because there's only one 14:05 and only one 8:22 per day. So there's much less room for confusion.

Hey! I think I'm getting the hang of this living in Israel thing.

I really am going to teach you a trick about buying frozen spinach in Israel. But first I want to tell you why I think it's important, even if you don't like spinach. ¹ 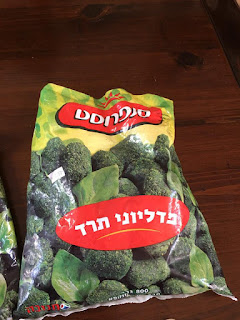 In 1991, Tzvia Ehrlich-Klein published this little guidebook to help people make the transition to everyday living in Israel. It was full of useful information. 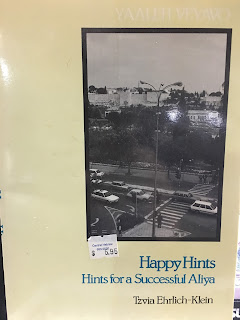 When she published her guidebook, most olim from America lived in a mercaz klita (absorption center) when they first arrived in Israel. Phone calls were made on public phones using asimonim (telephone tokens).

We're talking a decade before Nefesh b'Nefesh was even founded.

I'm working on an updated guidebook, chock full of helpful hints for today's olim. Because as soon as olim arrive in Israel, we have to learn tons of new things. Sometimes, a neighbor will give us a useful tip. Other times, we have to learn the hard way.

My goal is reduce the amount of trial and error by equipping olim with practical, useful information.

I knew that the Hebrew word for spinach is תרד- tered. But it took me years to figure out that there are (at least) two different kinds of frozen spinach sold in Israel.

I definitely noticed that the frozen spinach pellets I was using came in two sizes. I just thought it had to do with differences in the factory that produced them.

Turns out, the larger pellets are called עלי תרד (spinach leaves) and are frozen spinach leaves. They take longer to defrost and always end up wrapped around the blade of my immersion blender.

The smaller pellets are called מדליוני תרד (spinach medallions) and are minced or chopped spinach.
I think you can see why I got confused. I just looked for the word תרד. Unless you see them side-by-side, the bags are virtually identical. 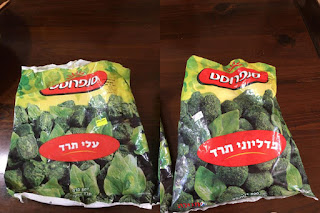 While we're on the subject, notice the red oval at the top of the bags pictured above. That's the Sunfrost logo. They are the most widely available brand in Israel. Sunfrost offers lots of varieties of frozen vegetables, beans and rice and the quality is very good. They also tend to be more expensive than other brands.

Now that I've shared my spinach tip, I want to hear from you. I know that if you've been living in Israel for more than an hour, you've got at least one.

So, what have you figured out about life in Israel that you'd like to pass on to new olim?

Or what small mistake did you make that you'd like to warn others about?

Here are some topic areas to get your creative juices flowing:

Feel free to respond in the comments below, or email TipsForOlim@gmail.com. That's also the email address to use if you'd like to be updated when the guidebook is ready for purchase.

¹ The reason spinach is so awesome in green smoothies is because you can't really taste it. All those nutrients and, despite its reputation, there is absolutely no bitter taste. Spinach for the win!

Posted by Rivkah Lambert Adler at 11:36 AM 3 comments

Stories and Tips to Ease Your Transition to Israel 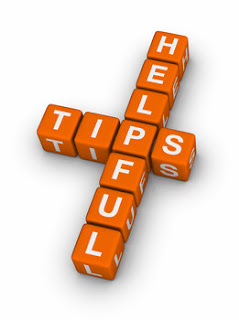 As my own aliyah journey unfolds, and as I continue to learn new things about how daily life works in the Holy Land, I've published lots of practical tips for managing our new lives in Israel, both on this blog and in Facebook posts.

After almost seven years in Israel, I'm ready to take these random tips, add tons more, and put them all together in a neatly-organized, practical guidebook for olim.

I'm envisioning a book full of tips and stories about the kinds of things olim learn from neighbors and from one another.

Or from trial and error.

Or just from error.

Things like:
My goal is to produce an encouraging guidebook, full of concrete tips as well as amusing stories. I want it to be both fun to read and truly practical.

To make this happen, I'm going to need lots of input from olim of every vintage, whether you got off your aliyah flight yesterday or have been here since before the Six Day War.

Please feel free to comment on any or all of these.
1) Do you have a funny/cute/embarrassing story of a mistake you made as a new olah/oleh? For example, did you wash your clothes in fabric softener for a year because you didn't yet know the word for detergent?
2) Do you have a serious story of a mistake you made as a new olah/oleh from which others can learn? For example, did you fail to respond to a piece of Hebrew-language mail that you really should not have ignored?
3) What's your #1 tip for living successfully in Israel, even if you've been here for years? Can be something practical or maybe a motto you've adopted.
4) What did it take you awhile to figure out that you wish someone would have explained to you from the beginning? For example, it took me almost seven years to notice that there's a difference between frozen chopped spinach and frozen spinach leaves.

So, what small thing have you figured out about life in Israel that you'd like to pass on to newer olim?

Or what small mistake did you make that you'd like to warn others about?
Feel free to respond in the comments below, or email TipsForOlim@gmail.com.

Posted by Rivkah Lambert Adler at 12:10 AM 2 comments