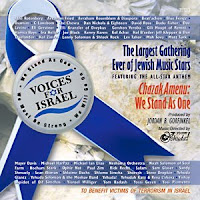 I have an Aliyah/Geula Playlist on my iPod. These are the songs that inspire me and I often play these when I'm cooking for Shabbat (which, ahh, is actually supposed to be right now...)

My list is, no doubt, idiosyncratic. The specific songs on my aliyah/geula playlist are:

Stand Up
Ayelet HaShachar on the CD Ohr Chadash

Flipping Out
Blue Fringe on the CD My Awakening

We Will Survive
Jordan Chaviv on the CD Baal Teshuva

Jerusalem is Mine
Kenny Karen on the CD Voices for Israel

Come Back
Moshav Band on the CD Higher and Higher

In Israel
Sam Glaser on the CD Voices For Israel

For the past few months, I have had what I thought was a recurrent fungal infection on my right foot. It clears and then returns and I can't seem to get rid of the itch permanently. There are no other symptoms. Just the itch.

Since I don't normally use this format to discuss my medical issues, you may be wondering why I'm bringing this up.

Today, it occurred to me that this is a case of podiatric symbolism. I have an itchy right foot and I can't make the itch go away.

Why do I have an itchy right foot? Because I have itchy feet - feet that are yearning to GO HOME ALREADY.

Sometimes, Gd is so literal.
Posted by Rivkah Lambert Adler at 6:18 PM 0 comments

We live in serious times. World-wide financial crises, frequent natural disasters which claim tens of thousands of lives, Islamic fundamentalism expressed through global terrorism and, for Jews in particular, a new Amalek, sworn to the goal of wiping Israel off the world map. The time has come for the American Jewish community to pray for the best possible outcome while preparing for the worst.

In Egypt, the prophetess Miriam and the women of her generation looked ahead and saw redemption. Rashi teaches that the righteous women of that generation were so confident the Hashem would perform miracles for them, they prepared by taking timbrels with which to celebrate. (Shemot 15:20).

Looking ahead with clear vision was also necessary in the time of the Holocaust. There is no need to recount how forethought saved countless European Jewish families.

On a spiritual level, the single most important thing we can do is to strengthen our emunah. Hashem runs the world. We must open our eyes and notice that Hashem is steadily bringing us into the days of Moshiach. With Gd's help, we will pass through these thorny times on our way to Geula with great rachamim.

However, there are certain concrete steps we can take to prepare our families, and ourselves, in case we, as a community, will be called upon to face harsh tests before we greet Moshiach. Jewish history is replete with occasions where Jews needed to leave their Diaspora homes hastily. If, Gd-forbid, the time comes when we will need to do the same, there are things we can consider doing now. None of these actions are irreversible and they may save your family precious time in the future, chas v'shalom.

Some of us, by our natures, will do more preparation and some will do less. Even if you feel that none of these actions are warranted by current events, the most important thing is to keep your eyes open and to notice what is going on around us. In serious times such as ours, the worst thing would be to simply not pay attention.

Yonah and Iyov - The Beginning of the End

In shul on Yom Kippur, we read Sefer Yonah at mincha time. Much of the sefer is about Yonah's attempt to escape from the job that Gd assigned him, which was to get the non-Jewish people in Nineveh to repent. But there's a part of the story that resonated very deeply in me this year in particular.

At the end of the story, after Yonah delivered his prophecy and the people of Nineveh have, indeed, repented their evil ways, Yonah, who was practically suicidal, ran to the east and waited to see what would happen next. Gd made a kikayon, a shady tree, grow unnaturally quickly, like in time-lapse photography, to shade Yonah as he waited on the outskirts of Nineveh. Yonah was very glad for the sudden appearance of this kikayon because it was hot where he was sitting and the tree offered him much shade.

In the morning, Gd sent a worm to eat away at the kikayon and it withered and was no more. What Gd had sent, Gd took away just as quickly. Yonah, already on the verge of despondency, was devastated. Gd was making a point to Yonah about how sad Gd would have been to lose Nineveh, but because of all the learning I've been doing lately, I read it a different way this year.

So far, as a result of the financial crisis currently grasping the world, my family has lost a sizable chunk of change from our retirement accounts. Most people urge us to sit tight, confident that the stock market will rebound and the money will be restored before we need it.

But what if this is the beginning of the end of materialism as we know it? I have begun divesting emotionally from every material thing I own. Before we came face-to-face with this stage of Jewish history, there are things in my American home I expected to take with me to Israel when we finally get to go. But now, I see that I might not have the chance to hold on to them. So I appreciate the bracha of having these things now, knowing that they are not with me forever, and maybe for far less time than I used to suppose.

I can give up the dining room table I inherited from my parents 26 years ago, my special lounge chair, my new side-by-side refrigerator and even the money on our retirement accounts. I pray only that, when the whole world of materialism comes crashing down, Hashem lets me at least take the people I love to Israel.

Yonah was sad when his kikayon was taken from him. But really, it seems, this is the lesson of all material things. As Iyov said, "Naked did I emerge from my mother's womb, and naked shall I return there. Hashem has given, and Hashem has taken away. Blessed be the name of Hashem." (Iyov 1:21)

We Can Have What Moshe Most Wanted

Ha’azinu is third in a series of four weekly Torah readings in which Moshe delivers his final “State of the Union” address. The first 43 verses are Shirat Ha’azinu, the song of Ha’azinu. If you looked at these verses in a Torah scroll, you would be able to guess that you were looking at poetry, even without being able to read a word of Hebrew. But it is what we read in the very end of the parsha that always stops my heart.

Hashem spoke to Moshe on that very day, saying, “Ascend to this mount of Abarim, Mount Nevo, which is in the Land of Moav, which is before Jericho, and see the Land of Canaan that I give to the Children of Israel as an inheritance, and die on the mountain where you will ascend…” (Devarim 32:48-50)

It boggles the mind to consider what Moshe was feeling as he climbed Mount Nevo knowing that, after 120 years, these are among the last steps he will ever take on earth.

But even more than that is what Hashem says a few verses later:

For from a distance shall you see the Land, but you shall not enter there into the Land that I give to the Children of Israel. (Devarim 32:52)

Moshe is told that he will die on a mountaintop in Moav, looking out over, “the Land of Canaan that I give to the Children of Israel as an inheritance.” He will never be in the Land. Moshe, the man who came closer to Gd than any living person ever did before or since, died without ever stepping foot in the Land of Israel.

I have been to Israel 19 times.

Every time I am privileged to get off a plane at Ben Gurion airport, I wonder, how is it possible that I get to travel to Israel easily, and Moshe, after leading the Hebrew slaves out of Egypt, bringing the Torah down from Heaven and leading the Jewish people in the desert for 40 years never got to step foot in the place?

There is a tradition that Moshe offered 514 prayers to try to get Gd to let him enter. The ability to understand why Gd couldn’t allow it is beyond my spiritual level. But, as a believing Jew, I accept as a matter of faith that Gd had a really good reason.

It is much harder for me to understand why so few American Jews find Israel relevant. Two thirds of American Jews have never even been to Israel. Two out of three!

How did I come to understand the importance of Israel to American Jews? On September 11, 2001, my lifelong presumption of safety in America was immediately and irrevocably shattered. I abruptly came to see the United States, a country that received my grandparents, and the three generations that followed them, for what it really is.

Don’t believe me? A few historical facts may help you see things more clearly. The first Jews came to America in 1654, but Jewish men couldn’t vote in Maryland until 172 years later. In 1692, the Church of England was the official religion in Maryland. And until less than 150 years ago, public office could only be held by those able to take the oath “upon the true faith of a Christian”.

Make no mistake. America, for all its many positive attributes, is hosting the Jews who live in her borders. This country is not ours.

And it never will be.

Gd has given the Jewish people a few hundred years of safety in America. But the Land of Israel He gave to the Children of Israel as an inheritance. 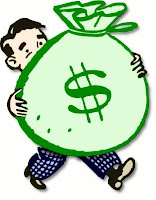 The lines have been drawn in the sand and the stakes are getting higher.

There are two schools of thought here:

#1 True, this is a financial crisis, but the government is intact and bank accounts are insured and the bail-out bill will pass Congress and the stock market will recover and all will be well with the world.

#2 This financial crisis is the beginning of the end. Hashem is destroying money - our modern day idol. It may not be a coincidence that money is sometimes referred to as "The Almighty Dollar". Thinking of the concept of idol worship, doesn't that expression now ring in your ear a little differently??

There's a part of me that would like to be lulled into theory #1, but theory #2 makes so much more sense to me.

We are being swallowed by materialism. One way to read the recent disruptions, and the ones to come, is that Hashem is making it very clear that He can destroy the idol which we worship in a Wall Street minute.

More than one person has gently suggested that, if I was not currently unemployed (ironically, an outcome of the recent financial squeeze), I wouldn't be spending so much time thinking about this issue and seeing Moshiach around every corner. I countered that maybe I've not found a new job yet, davka, so I'm free to think about these things.

Call me crazy, but I really feel the geula coming.
Posted by Rivkah Lambert Adler at 9:23 PM 0 comments