How Do You Suppose Gd Feels?

Bumping into people we know from America while strolling around Jerusalem 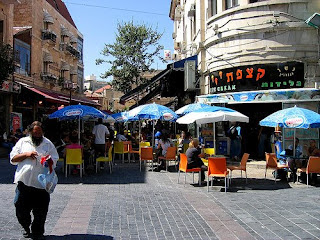 is kind of a common event around here, so it's no big surprise when it happens. Recently, just such a thing happened and we started talking, asking the usual questions. "What brings you here?" and "How long are you here for?" and, of course, my favorite, most intrusive question to ask people visiting from America is, "So, when are you making aliyah?"

Usually, people respond by talking about how much they wish they could, if only, if only. I'm kind of used to that. But this time, what I heard kind of knocked me for a loop.

It's not that the person who said all this is the only one who feels this way. Of course, I know that some people, many people, are thinking these thoughts. And I recognize that it's a very, very early, unsophisticated response to the question I posed (some might say to the question with which I assaulted her). To be fair, these are religious American Jews on vacation, not people who have already signed up for their pilot trip, so to some extent, it's an unfair question to ask.

Eight years ago, I might have said something similar. Now, I noticed how much it hurt my heart to hear a religious Jew proffer such a vacuous answer.

And I wondered, how does Hashem feel when even a religious Jew from America so spurns Hashem's gift by clearly not having the least intention of even considering that Israel could be a place to call home?
Posted by Rivkah Lambert Adler at 3:04 AM

Unfortunately, this is the same story over the millennia. Look at Reuven and Gad in yesterday's Parasha. I am currently in the galus of Florida on business. I will be in Silver Spring for Tisha B'Av. There we will cry for Yerushalayim. A few days after that I will be home in Yerushalayim. The rest of them will still be in Silver Spring, Baltimore, Teaneck, Monsey, etc. etc. Then again, you will be back in Baltimore soon. At least you ache for the Land. Most of your kehilla does not. They are careful about Shabbos, kashrus, shaatnez, etc. But live in an apartment?! G-d help us!