Snapshots from the Holy Land

We went to a chad-pa'ami store, which basically sells upscale disposable tableware. The reason I wanted to go to this store was to stock up on unique items such as little plastic cups that say L'Chaim, napkins that say Shabbat Shalom (in Hebrew of course) and paper cups with the flag of Israel. Well, as my husband might joke, they don't say anything. You have to actually read the words.

As we were checking out, paying many shekels for our stash of Jewish chad pa'ami-wear, I noticed that there was an egg mold in the shape of a Jewish star. I don't really have a use for such a thing since I rarely make eggs, but I was struck by this thought:

In Israel, people speak my idiom.

In America, or in any host country, a Jew has to fit him or herself into the larger culture. Some Jews, many Jews, do this by assimilating. In essence, this means that, as a response to the discomfort of feeling different, the Jewish person eliminates from his or her life whatever distinguishes him or her as a Jew. Of course, Judaism teaches us that this is not possible. Not really, for the Jew is essentially always a Jew, regardless of how much or how little s/he identifies with the Jewish people. But assimilating is one solution to the dilemma of feeling different.

Another solution, found mostly in Orthodox communities in America, is isolation. These kinds of Jews who live outside of Israel (and I learned a great term for this - chutznikim - which means those who live in chutz l'aretz, outside the Land of Israel), these kind of chutznikim build parallel lives for themselves in America. Separate schools, separate restaurants, separate neighborhoods, separate stores. This is the kind of community I live in when I'm not privileged to be here. Admittedly, some communities in the NY area, such as Flatbush and Boro Park, have raised this isolationist approach to an absurdly high level. But it, like assimilation, is another solution to the dilemma of feeling different.

In Israel, people speak the Jewish idiom, so there is no need to assimilate or isolate. The chad-pa'ami store sells napkins printed with Shabbat Shalom. I don't have to cover my hair with a sheitel to fit in a professional setting here. The graffiti in Israel often includes Torah-based messages. Yesterday, I photographed a bit of graffiti stenciled on the side of a makolet (a small, local grocery store) that said, "The essence of Redemption is based on faith." (Of course, it sounds better in Hebrew). 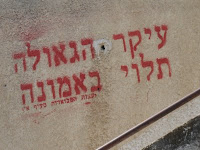 Everywhere I go, my need to wash my hands before eating bread is understood and accommodated. The grocery store sells prayer books and other Jewish ritual needs, right there next to the toothpaste and laundry detergent. 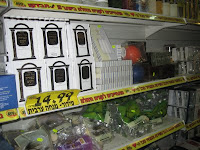 The examples are endless, but the point is a strong one.

One way or another, chutznikim must adapt their Jewishness to survive in a host culture. Here, that is no longer necessary.
Posted by Rivkah Lambert Adler at 10:35 AM