"This isn't the same America you left," my son. 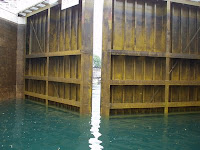 On the one hand, I'm watching what's going on and, like the neilah service of Yom Kippur, I see the gates closing on American Jews. I believe that this worldwide financial crisis is a tool of Gd's to get the Jewish people to separate themselves from their material success in the Diaspora and to come back home to Israel.

While shopping for vegetables on the local kosher market last week, I ran into a friend whose son, a second year yeshiva student in Israel, just arrived back for his Pesach break. She reported that he was looking for a job for a few weeks to make some money before he returns to Israel. "Just remember," she reports saying to him, "This isn't the same America you left."

To feel obligated to communicate that to a 19 year-old son. Now that's dramatic.

I watched a Holocaust movie a few weeks ago. What struck me most was the story of what happened to Jews in Vienna just before things got really bad. Changes that had taken months to implement in Germany were implemented much more quickly after the Nazi invasion of Austria. Seemingly overnight, life for the Jews in Vienna changed dramatically for the worst.

Was September 11 not a foreshadowing of this for the current generation.? How rapidly so many of the systems we depend upon could disappear!

On the other hand, I am beginning an entirely new business venture. True, I've built it so it has the potential to provide income from Israel as well. But it's somewhat like building on quicksand. Sometimes, I ask myself what I'm doing, establishing something new exactly when I feel that I should be closing down everything old.

But, if I have to be here for awhile longer, I have to be productive. I can't sit around wringing my hands indefinitely.
Posted by Rivkah Lambert Adler at 6:36 PM

Of course you can't. It's not good for the health. And it plays havoc on the hands. Keep busy. Build new plans, portable plans. Keep teaching people. Most importantly, don't let yourself be freaked out. Hashem is still in charge; and you have made it very clear to Him that you are listening. What more can you do? Stay b'simcha. That is the biggest challenge for our generation. :-)