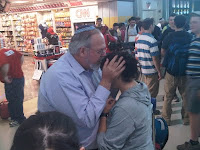 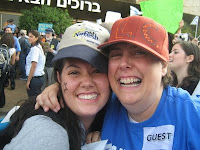 Ain od milvado. There is truly none besides Him.
Posted by Rivkah Lambert Adler at 5:09 AM

Uh... do you have any of those tissues left? Between the writings of two of funniest people I know, I am an utter mess. Thank you for putting your hearts out there. What is the expression? "Ariella is not leaving. She's leading." May you all come Home very soon.

Rivka - you look so happy! What beautiful posts. Thank you, Elan and Rivka, for sharing your emotions and thoughts with us.

It was so nice to be there with you and share your joy. May Ariella have an easy klita. We will be there with her to welcome both of you home.

And I was passed out on the tarmac. Oh, well, my intentions were good. Can't wait to welcome you and Elan. Minus 45 months and counting?

I can't tell you how touched I was from reading this, not to mention viewing the video of the arrival. You've iginited a spark in me that I've not felt before that perhaps will one day light a path towards a direction that I've never thought to take. FYI - even Mira knows this is our home and calls it as such. Maybe one day we'll come to know what you've already realized. Mazal Tov on your daughter's achievement. Shana Tova - Gerri and Mira

And I met my daughter coming off the same flight! A little different, though, as my Aliyah preceeded hers by 6 years. Sometimes the Abba actually knows what's best! Still, I flew over to the Old Country to help her pack and organize. Then came back to the Holy Land the day before the NBN arrival to meet her. No more excuses, Rivka. We're waiting form you!

AZ - You have to believe me when I tell you that, if Hashem would allow it, I would make aliyah in a heartbeat. In a New York minute. In a nanosecond.

But for now, Hashem is saying, "Not yet Rivkah. Not yet."

That's my reality. And an opportunity to strengthen my emuna.

I believe you, Rivka! It was just a good-natured nudge. At least you have the yearning. Most in the Old Country (even Charm City!) do not. As for the "not yet," I thought I heard that, too. A few smacks-upside-the-head later, my hearing improved substantially and here I am. B"H!!

Mazal Tov, Rivka. What a pleasure it was to meet you at the blogger's convention. You and your husband must be bursting with pride. Having your daughter here is just an extra anchor pulling you closer. B'ezrat Hashem you'll join her soon.