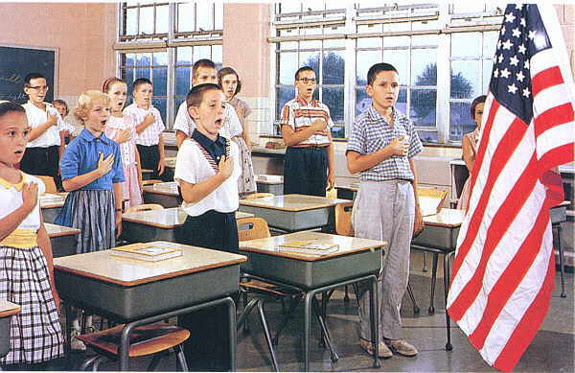 When I was a student at Memorial Junior High School, we stood each morning, put our hands over our hearts and recited The Pledge of Allegiance.  On one particular morning, while the Vietnam war was in its final years, I did not feel like standing.  I was 13 years old.  I was not taking a political stand.  I didn't even know what taking a political stand meant. I just did not feel like getting up from my seat that morning.

One of the Home Ec teachers, a rough woman whose name is lost to time, pulled me up by the scruff of my neck and castigated me publicly.  How dare I not stand for The Pledge of Allegiance when she had a son fighting for America's freedom in Vietnam?

Now it's September 11, 2001 and all of a sudden, it dawns on me that America is the latest in a long series of host countries for the Jewish people.  In trying to reconstruct how the events of that day led me to such a conclusion, I can draw only the fuzziest of lines. The line starts with the thought that, if such a thing can happen in America, then America is not intrinsically safer than Israel.  If America is not intrinsically safer than Israel, then why am I not living in Israel?

In retrospect, it wasn't logic that opened the door to understanding.  It was a gift from Hashem, Who cleared my vision.

In June of 2002, while the Second Intifada raged in Israel, my husband and I traveled to Israel.  Our decision to do so was a puzzlement to many American Jews, so I spoke about it publicly.  What I most remember was that, right after my talk, a man in his 70s came up to me to castigate me.  He was less hostile than the Home Ec teacher from 30 years before, but his message was similar.  How dare I speak against America?  Don't I know how dangerous it is for American Jews to speak like that?

What did I say that so riled up this elderly man?  I said:

Make no mistake. America, for all its love for religious tolerance, is hosting the Jews who live in her borders. This country is not ours.
And it never will be.

Right now, Jews live in relative safety and security in America. But for how long will that be the case? As great as this country is, don’t allow yourself to get so comfortable that you can’t imagine America vomiting out its Jews. Remember the lesson of history. It’s happened in every other country where Jews have ever lived. Our sense of security in America is deceptive. It’s a mistake to rely on it.

I said that in 2002 and, seven years later, I still mean every word of it.  And it still causes a tremendous ripple of hostility.  Recently, my husband and I were interviewed by the Baltimore Jewish Times about our decision to make aliyah.  In that interview, I talked about some of the political and theological reasons for our decision.

“I’ve been feeling an increasing level of discomfort about the future of American Jewry and that our collective time in this Diaspora community is coming to an end,” she said. “I want to get my family out while we can still leave comfortably. I think assimilation is killing us off.”

In addition, Dr. Adler said she believes such recent developments as the economic downturn and President Obama’s election demonstrate that “God is closing the doors for Jewish life in America, to bring on the redemption and bring us home.

“Our current president embodies the lineage of Esau and Ishmael. I’m not saying he’s an evil person, but that’s symbolic,” she said. “He’s no friend of Israel and he’s changing the historical friendship between Israel and America. … Everything about his presidency reminds me of God’s plan.”

In the few weeks since the article appeared, my comments have been the source of seemingly endless castigation.  I have been accused, in Letters to the Editor, in private conversations, in online comments, in sermons by rabbis of liberal congregations and in private emails of the very same thing that my 8th grade Home Ec teacher accused me of.

How dare I criticize this great country of ours after all it has done for me?  How dare I suggest that the door is closing on America's Jews?  How dare I declare America a diaspora community?  Didn't I notice that the President appointed Jews to two very senior positions?  And, most potent of all, don't I know what bad will my comments will generate among non-Jews?

Bad, bad Rivkah! You are a disloyal American!

I have clearly made a lot of people uncomfortable.  And I have never felt as misplaced and displaced in America as I do today.

The Golden Age of Spain, when Jews thrived religiously, culturally and economically on the Iberian Peninsula, lasted for 400 years.  Power changed hands, history moved on and Jews were painfully expelled from Spain in 1492 and from Portugal in 1497.

Jews lived in Germany as early as the 4th century.  For 200 years, from the early 18th century until the early 20th century, Jews achieved political emancipation and prospered in Germany.  Power changed hands, history moved on and 6,000,000 Jews were killed by Nazis.

This exact same scenario has played out in dozens and dozens of other countries since the destruction of the Second Temple.

I will say it again.  One hundred years ago, America took in my great-grandparents when pogroms in Russia threatened their lives.  My children are 4th generation American-born.  There is no doubt that, since 1654, America has been a haven for the Jewish people.  There is much to appreciate about America's role in Jewish history.

If my awareness of Jewish history and my desire to keep my family safe in the face of the growing Muslim influence in America makes me evil in the eyes of other American Jews, so be it.

At least I know my place.
Posted by Rivkah Lambert Adler at 8:10 PM

Hi Rivkah,
We made Aliyah 4.5 yrs. ago, first to Beit SHemesh, and then to Chashmonaim.
I have been saying the same thing as you for several years. Jewish life in America is unstustainable - mainly for economic reasons (who can afford dayshcool tuition?). And, like European countries, America is slowly but surely learning about Muslim extremism that is being homegrown. This is not a good recipe for Jewish survival in AMerica. I hope this financial meltdown will continue to be a wake-up call to my fellow American Jews, before it is too late.
So, you are not alone. Like usual, people hate hearing the truth!!!
Neil S. Friedman MD

Now you've done it! Talking about G-d? Veiled criticism of St. Obama? And that American Jews (Jewish Americans?) are in the "diaspora?" Sounds like another right-wing, religious-fanatic, Bush-loving, nut-job to me!

The letters to the Jewish Times say it all. Even your ba'alei batim see the need to publicly disassociate.

Time to come home, dear lady. We are waiting here for you!

Right on, Rivkah.
I'm making Aliyah at the end of this month. The most difficult thing has been trying to answer the question "Why are you moving to Israel?" I totally agree with you about Jews in America. And, the majority of them can't hear it. I hope to meet you in Eretz Israel soon!
Karen

I think people get mixed up between "host country" and "home country".

Is Israel really perceived as so primitive that people can't imagine living here?