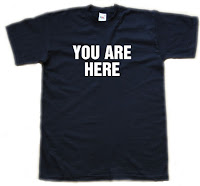 It's like the feeling you have right after the wedding.  You know you're married now, but it doesn't yet seem real.  Or the similar feeling after you've had your first child and refer to the baby as "my daughter" or "my son".  It takes awhile for the reality of that change in status to sink in.

It hasn't sunk in yet.

We spent much of the past week in various government offices, trying to get all our official business done in as short a time as possible.  This often means visiting three or four offices a day, schlepping mounds of official paperwork and, often, returning to the office a second or third time because a) we weren't in "the system" yet or b) we didn't have the right stamp on the right form or c) the person we were speaking with couldn't help us so we had to come back when someone else was available.

It's all a matter of attitude.

I can see where some people in our situation would get stressed and short-tempered.  Some of the rules seem arbitrary.  But, we are so happy to be here that nothing seems to get us down. 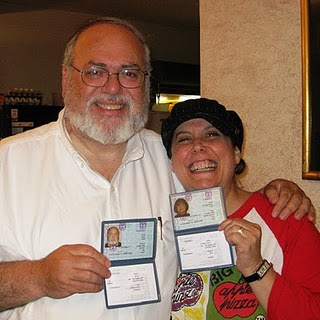 Photo credit: Ruti Mizrachi
We know how lucky we are - to be here at all, but also:

to have things like utilities, a bank account, basic appliances and beds already in place
to have a car at our disposal
to have a reasonable command of Hebrew (ahem... that would be my husband, not me)
to have found so many people willing to help
to know our way around a bit
to have friends we can call on for advice
to not have to schlep small children wherever we go

One of the ubiquitous government clerks we met with commented that we are the calmest olim he has ever seen.  Which I took as a particularly high compliment because, when we first met him, he was pretty gruff.  But I was determined to sweet-talk him, not for any ulterior motive, just because I didn't want to walk away with any bad feelings.

Here's a line that's worked for me all week - "So, just how many languages do you speak?"  It's a matter of endless fascination to me since I am such a uni-lingual creature.  But it also makes for warm feelings and great conversation.

We are also enjoying our share of "Only in Israel" stories:

At the entrance to the mall erev Shabbat, the security guard handed me a small packet with two tea lights and a sheet of paper with the week's candle lighting time handwritten.  She asked me how many daughters we have and gave me a pack of tea candles for each of them as well.

The other day, I was rushing around trying to find a particular office to rent something we needed for Shabbat.  I finally found the office two minutes before it closed, leaving me no time to return to the car and get ID and money to complete the transaction.  I opened the door and walked in anyway, and my eyes immediately fell upon one of the handful of people I know in the city. She lent me the money and I left with what I needed.

In the local grocery, I brought three sleeves of plastic cups to the register.  They were on sale for a very attractive price.  At the register, I noticed that they were made in Turkey, so I put them back and got a more expensive Israeli brand.  In recounting the story to a friend, she told us that the store announced that they were selling off whatever stock they already had from factories in Turkey and would not be doing business with the now-hostile country anymore.  How the political becomes personal in this small but complicated country.

One of the most defining moments of the week happened in a friend's kitchen late Sunday night.  These dear friends made a welcome barbecue for 35 or 40 of our mutual friends, mostly former Baltimore neighbors who live here now.  After almost everyone had gone home, there were four couples left standing around in the kitchen.  We have all known one another for a decade or two.  We were just yammering about life and it suddenly occurred to me that I am now one of them.

My mind flashed to dozens of similar gatherings over the past number of years, each tinged with indescribable sadness, because everyone else got to stay here. And, in a finite and painfully small number of days, I had to leave.

I live here now.
Posted by Rivkah Lambert Adler at 2:24 AM

Beautiful! Thank you for reviving those "first days" memories for us. Making those early days analogous to a new marriage and a new child is perfect. Like those other milestones, the love can continue to grow, as we see the best in our spouse, in our child, and in our new country.

I am so happy you are here!

I remember when the "I live here now" moment hit, although it was a few months after our aliyah. We came at the end of July, and some very close friends were here for Sukkot. We were with them in Yerushalayim, and at the end of the chag, we got in a taxi and headed back to the bus station, while they headed for the airport to get back to the states. On the bus back to the yishuv, it really hit me - all the tourists were heading out, and we were staying. This was our life now. It was a very powerful moment!

When I first arrived "for ever" I did the government office parade, too. I just cried every where I went...the folks dealing with me asked why I was crying...I was crying because it was such a relief to know I was here "for ever" and no body could make me leave!! Amazing how the folks warm to a crying woman and how quickly they helped me....and gave me tissues to blow my nose!!
So glad you are here too!

Barbara, a friend of ours says, "Scratch just below the surface of any Israeli Jew, male or female, and you will find a Yiddishe mama dying to help you out of your difficulties."

We found this to be true, even at government offices, just as you have.

Congratulations on your aliyah - blogging is a great way to record the highs and lows of this amazing experience.