A few snippets from our new life in Israel, with occasional, accompanying illustrations.
Yesterday, as we continued to chase our citizenship benefits around from one government office to another, we had a monumentally difficult one scheduled.  It's one I've been postponing because of several unique administrative complications we were facing. I left the house armed with what I hoped was the right documentation.

We stopped at the mail box to see if a package my husband was expecting had arrived.  Not only had his package arrived, but so had a letter from the very government office we were about to go visit.  Just this week, I gained the tiniest bit of confidence understanding our household bills, but when I open a letter written entirely in tiny Hebrew letters without vowels, I still panic. However, this time, I took a deep breath and tried to decipher the letter.

The letter advised us that the very matter about which we were going to visit the office had already been resolved in our favor.  It was done!  I don't know how or by whom, but I confirmed with our bilingual banker that my understanding of the letter was correct.  Oh, how good Hashem is!

Today, we began the scavenger hunt known as the process of converting a foreign driver's license to an Israeli one.  Depending on how you count, there are a minimum of eight necessary steps to the goal (and the opportunity to drop some shekels at every step :-)  Our first step was to go to a certain optometrist in a certain mall which doubles as something of a mini-branch of the Israeli equivalent of the MVA.  We knew which mall it was in, but that was about all the information we had.  Behold and lo!  The very minute we walked into the mall, we found the optometrist because it was the very first store closest to the entrance where we "just so happened" to park.  Oh, how good Hashem is!

By the way, here's the view from our parking space at the mall.  Not too shabby. I surely never saw vistas like this when I parked at Towson Town Center. 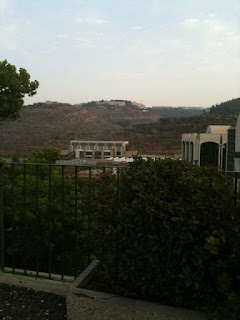 While on the second of three levels in the mall, we looked down and realized it was back-to-school season in Israel.  For some reason I don't yet understand, backpacks are very serious business in this country. 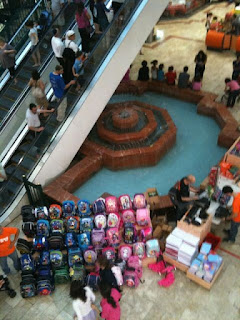 Several times while wandering around the mall, we found ourselves near a small group of English-speaking teen girls, all around the same age as our youngest daughter. A few of them were still wearing the hard-to-miss GUEST stickers from the Nefesh b'Nefesh flight that landed this morning.  At the food court (did I mention it's 100% kosher?), I stopped to speak to one of the girls whose cow hat attracted my attention. 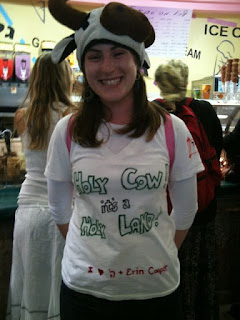 This creative (and obviously very self-confident) girl is Zisse.  She's 16 and lives in Teaneck, NJ.  Her shirt, which coordinates nicely with her cow hat, says, "Holy Cow!  it's a Holy Land!"  Zisse is in Israel on a 5-week NCSY program called GIVE, a chesed program that brought the girls to the airport this morning to welcome the 234 new olim, including the Gottlieb family from Baltimore. 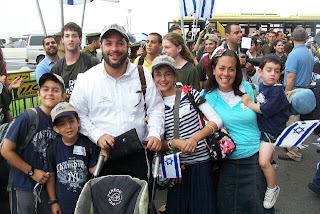 This was the first aliyah flight landing since our own four weeks ago. We didn't go to the airport, but I looked through Jacob Richman's 338 photos of the event.  I didn't know how I would react, now that I'm actually living here, so I was surprised when I got choked up at some of the photos, especially this one (maybe it's the mom in me) of a brand new olah during her very first moments as a new citizen. 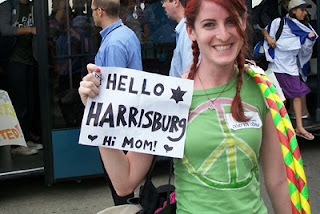 I loved that shot, too! Same reason. Thanks for sharing "Holy Cow!" Keep enjoying and sharing every precious moment!

first of all - backpacks are serious business for school kids here! i love how i see tiny kids wheeling giant suitcases to school - makes me wonder what size the books are! and thanks for sharing the photos, great to see!