A New Stage In My Klita

When I was a young teenager and full of teenage angst, I wrote a lot of poems.  Looking back, they were not universally maudlin.  Some of them were actually quite good.  Some were even published.

What I remember about those years was how I would get an itch to write a new poem and I could not rest until I took pen to paper, to write and rewrite.  I eventually discovered the joys of electronic revision, but not until I was out of my teen years, after home computers became more common.

I have recently begun to feel that itch again, not to write poetry now, but to teach.

Over 20 years ago, when I first started to take Judaism seriously, I was slapped in the face by the many inequities I found, as a woman, in Orthodox Judaism.   As a way of coping, I began to read anything I could find on the general topic of women and Judaism. 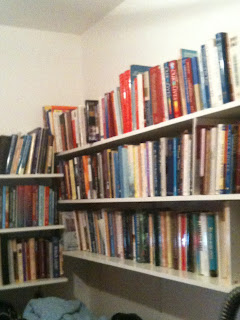 For at least a decade, I bought every new book on the topic, eventually amassing a collection of over 400 books in the field, every one of them about some aspect of women and Judaism.  I intended to leave the majority of them in Baltimore, but Hashem had another plan.  As often as I tried to sell or place the collection before we made aliyah, all roads were dead ends.  So I brought them here.  The collection is too big to fit in our library, so we hung shelves in the guest room and most of the collection lives there now.

Along with collecting books, I began to speak to other women who were also struggling with gender-based issues in Judaism.  My conversations were informal at first, but eventually, I began to write and to teach.  And I continued to teach, mostly about women and Judaism, in formal and informal adult education settings, for the next 20 years.  When I taught my last class the month before we made aliyah, I assumed that part of my life was over.

My recent experience on Simchat Torah reactivated something that lay dormant within me for nine years while I focused on getting my family to Israel.  Recently, the itch and the urge to teach reasserted itself.  There is no question that Hashem is pushing me to begin again.

Just a few months ago, I was afraid to board my first Egged bus without my Hebrew-speaking husband.  Since then, I have grown comfortable riding four buses a day.  Again today, after ulpan, I walked through the shuk, bought fruits and vegetables for my family, hopped on a bus and hopped off before the stop for my second bus home, all without a whisper of anxiety.

In that respect, I have reached a new stage in my klita.

And now, with new Torah thoughts and new understandings that Hashem has been gracious to open up to me, I am ready to share again with other women.

I didn't know I would miss this.
Posted by Rivkah Lambert Adler at 3:21 PM

YAY!!!!! Can't wait to be your student. It's fun being your chevruta.