Where Judaism Makes The Most Sense 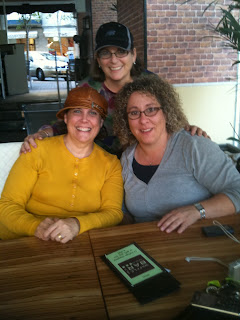 Yesterday, I had lunch with two former colleagues, now friends, from Baltimore, both currently visiting Israel. These are two of the most Israel-aware friends I had in Baltimore.  Both speak Hebrew far better than I do.  And they were kind enough to let me, ahem... advocate for their respective aliyah (aliyot?) during our lunch.

It's no secret that, across the board, unless there is some really compelling reason not to make aliyah, I'm a big fan of reminding people who, like these friends, are profoundly Jewishly-identified and are Hebrew speakers to boot, that they belong here.  It's actually quite a challenge for me to NOT talk about it.  Because really, at this point in Jewish history, what other Jewish decision is as compelling?

On some level, it was indescribably surreal to be sitting in a cafe in Jerusalem with these two friends and to be the Israeli among them.  The whole time, I kept thinking how lucky I am that, among the three of us, I'm the only one with a teudat zehut.  I live here.  I'm a citizen of Israel.

At some moments, I can still hardly believe it.

Earlier that morning, I went to ulpan as usual.  On the way in to class, I saw a couple of "only-in-Israel" sights that made me smile. 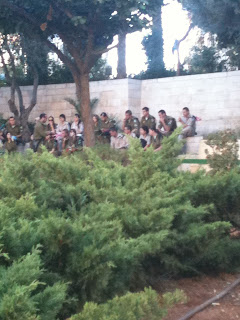 I had to take this photo at a distance because I didn't want to arouse suspicion.  This is a group of Israeli soldiers, gathered in the plaza outside my classroom building in the middle of Jerusalem.  There was another group of soldiers off to their right and each was being addressed by a commanding officer.  I have no idea what the gatherings were about, but I feel so privileged to see Israeli soldiers  nearly every day.

At our stage in life, our daughters, their friends, and the children of our friends are all right around army age.  So we hear an increasing amount of army talk in our house.

I see soldiers on the bus nearly every day, especially on Sundays when so many of them are returning to base after spending Shabbat with their families.  I see soldiers in the Central Bus Station, guarding their guns and eating felafel at the same time.  I see soldiers nod to us as we drive through the checkpoint between Jerusalem and Ma'ale Adumim.  It's part of life here.  As a mother and as a citizen, my heart swells with pride at the sight of our soldiers.  I have to be honest.  I just never felt that way about American soldiers.  Here, the soldiers are truly, literally, our sons and daughters.  In America, it was never so personal. 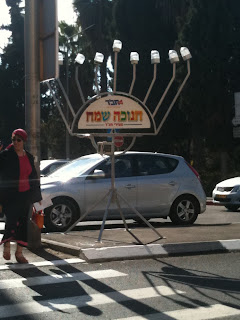 Finally, a greeting of the season.

Nope, not THAT one.

One day, on the way to ulpan, this giant menorah just popped up on the street.  I just love how the Jewish holidays spill out onto the streets here in a completely organic manner. 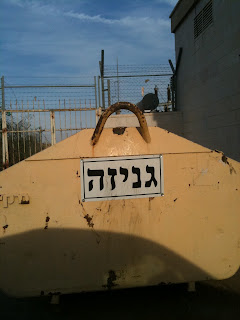 I know I said that the menorah was the last picture for today, but there was one more tiny moment recently that really brought home how integrated Jewish life is here.

Since Jewish law requires that any paper with Hashem's name on it be buried as a sign of respect rather than thrown away with potato peels and burned toast, observant Jews always have a dilemma about what to do with these papers.  Sometimes they come to us in publications, in photocopies of sources from Torah lectures and in books that are no longer in good enough condition to retain.

In Baltimore, there were men we called (and paid) to come and pick up boxes of these sorts of materials. They would accumulate for weeks and months before we had enough to make it worthwhile to pay someone to come and cart them away to a local Jewish cemetery.

But now, for me in the Holy Land, in the only Jewish country in the universe, there is an easier solution.  Just a few kilometers from our apartment, on the way out of the city, there's a giant yellow receptacle for these sorts of papers.  The Hebrew on the sign reads "genizah" which literally means archives, but is understood as the place where holy books, magazines and papers may be deposited and will be treated with proper respect.  To date, the most famous geniza is known as the Cairo Genizah.  Perhaps someday, this yellow tin can will come to be known by scholars as the Ma'ale Adumim Genizah.  Until then, it's just another reminder of how lucky I am to live in the one place in the world where Judaism makes the most sense.

I still get goose-bumps after 4 years of living in this only country we Jews have that is our own!
May we never stop being thrilled by the little things that only happen in Israel!!

I just send by Torah sheets and what not with my kids to school because they have a geniza bin in the school!

If you saw the soldiers in the center of Jerusalem, most likely they were having a "cultural day" in the city. Since they come from many different backgrounds, their training includes lectures and visits to areas of significance in Jewish and Israeli history. The idea is that the more you know about what you're protecting, the more dedicated you'll be to protecting it!

I'm here in Israel 40 years and the wonder and joy never fade.