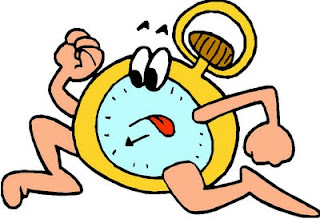 Decades ago, my first job out of graduate school was at an Historically Black University. Among certain members of the staff, there was a concerted effort to teach me - the new, young, white, Jewish colleague, about their culture.  One of the expressions I learned that year was [WARNING: racially sensitive comment follows] "CP Time" which Urban Dictionary defines as, "The usually correct stereotype that African-Americans are incapable of punctuality, and are chronically tardy in both arriving at and beginning events and functions."


I think of that expression now and then because it reminds me of the similar expression "Jewish Standard Time" which seems to operate in very much the same way.


Then there's something about time in Israel whose name I do not know but under whose influence I live on a daily basis.


I experience time in Israel differently than I did before.  In some senses, time passes much more quickly here. We just had our nine month aliyahversary and I can't believe we've already been here that long.  Perhaps a better example is a conversation I had with a neighbor who was trying to explain to me why she hadn't gotten around to calling me about a shul issue.  She said, "Shabbat ends and I intend to do something about it, but then I blink and it's Friday again."


My life revolved around Shabbat in America too, but it's different here.


Of course, the classic example of Israel Standard Time is "acharei hachagim" (literally, after the holidays) which is an absolutely legitimate excuse for postponing anything due in the general proximity of a major Jewish holiday.


But there's another sense of Israel Standard Time that comes from being more in tune with the Divine.  We might fairly call it God Standard Time.  It's the sense, palpable here in Israel, that things move, not according to our schedule, but according to some Divine Plan.  After living here awhile, one becomes adept at foregoing any solid expectations about when things will happen.  It's humbling, in a way, to be constantly reminded that the world runs on a timetable entirely separate from the one in my calendar.


I had a hint about this before I came to live in Israel full-time.  On a few trips here, I needed to conduct a handful of business meetings.  Being the conscientious American administrator that I was, I tried to set appointments weeks in advance. Invariably, my Israeli counterparts would say, "Call me when you're here and we'll arrange something."  I thought it was an odd way of doing business, but now I see that it's more accurate to say that it's an Israeli way of doing life.


I detect something admirable, if unarticulated, in the constant awareness that things can change in a heartbeat because God runs the world.  It's not that Israelis don't ever plan for the future, but there is a profound respect here for the malleability of the future.  It takes some time for inveterate Western thinking to change.


A corollary to this is the way that I have adapted to things not happening when they were originally supposed to.  Lots of stuff plainly takes an uncommonly long time to accomplish here.  There's a great Israeli expression  one hears in response to a demand for an explanation for which there simply is no explanation - kacha zeh - that's just the way it is.  I've watched myself going through The Three Stages Of Kacha Zeh:


Stage 1 - That is just an unacceptable answer!
Stage 2 - Oh well!
Stage 3 - I can't believe I just answered kacha zeh in response to someone else's question!


One learns to live inside the flow of time and not rush things.  Things (jobs, events, friendships, construction, resolution of bureaucratic glitches, etc.) bloom in their right season.


It's very Zen, very Simple Living. And, in the end, very biblical.*

I wondered why a time-Yekki like me hasn't bothered to wear a watch in three years... :-)

Time is an invention of our own minds and the way we orient ourselves to the world. Yes, things change and that is a measurement of time, but who says it happens in the way we think it does? Your story perfectly illustrates how the passage of time depends upon our perception and how that perception can change simply by moving to another country. Awesome!

After 40 years in Israel we are still surprized when we show up for a wedding at the time in the invitation and we are there before the bride and groom. It seems that the Jews(in Israel) are "above time". When you are Am HaNetzach (the eternal people), what is half an hour here or there.