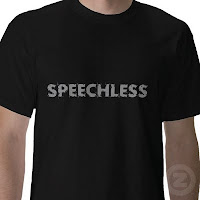 I took the undergraduate catalog (which was still available in a paper edition in those ancient days of yore), circled every course that I wanted to take and majored in the department that had the most of them.

I have always been fascinated by human communication.  It's a process I cherish.  Which is why, when I find myself rendered speechless, it's especially painful for me.

Last week, leaving shul after Kabbalat Shabbat, I ran into two young women who were standing outside.

I don't know why, but this expression always pierces me like a dagger to the heart.

Me: Touching her gently on the arm, "You know, you already are Home."
Her: "Well, I really would like to make aliyah, but I don't want to come without my family."

So I tell her about our then 19 year-old daughter who did exactly that, and how, in the end, it contributed to the escalation of our own aliyah plans.

Her: "Oh, my family wants to make aliyah too, eventually.  But I have two brothers, 11 and 12.  And as my parents always say, 'Chinuch (education) comes first.'"

This is the part where I am rendered speechless.

My standard approach when talking with young people who still believe that America is their home is to point out how things are changing, how Moshiach is certainly on his way, how life won't be good for the Jews in America indefinitely and how, as young people, they should keep their eyes and ears open, keep their antenna up, and watch for the changes that are certainly coming.

Generally, they look at me as if I have two heads.  Or maybe three.

When I became religious, I can't recall ever feeling compelled to convince other Jews that this is the right way to live.  Though I love explaining Judaism to Jews who don't yet know the richness of their own heritage,  I've been perfectly content to let others make their own religious decisions.

Why then do I persist in urging Jews to come Home at the first possible opportunity?  Why do the repeated explanations - I can't leave my family, everything I need to be a good Torah Jew is here in my American city, my home is in the US, I can learn Torah better in America, aliyah is not a Torah obligation, America will never turn on its Jews, the State has no kedusha since it was founded by non-religious Jews, I can make a living more easily in America, etc. etc. - fall so, so painfully on my ears?  Sometimes I feel I'm in a no-win, twisted contest.

When I hear one of these rationales, justifications, excuses, reasons emerge from the mouths of American Jews, religious American Jews, I am filled with such a rush of discomfort that I can't quite name.  Is it anger, at their intransigence? Is it fear, for their future? Is it pity, that they are so blind to what's coming? It's so complicated!

What I want to feel is love.

So from now on, here's my fantasy of a totally new approach.

Me: "So, what are your aliyah plans?
Them: "Oh, we're very comfortable in America."
Me: "Well, I hope you change your mind and come Home soon.  We need you here."
Posted by Rivkah Lambert Adler at 3:42 PM

as someone who grew up completely separated from torah and Jews and discovered my Judaism and my path at 15 years of age...I am always even more speechless than you. There is no future for Jews in America that does not lead to death.

Do you ever think tho, that it took you X amount of years to make aliyah and you could have been told the same thing as them all those years ago? Every time I want to toot my aliyah horn I start to think, "who am I? it took us so many years to make aliyah and was told those same things by people every time i visited."
I thank GD everyday that we made it here and I really want to shake all of my friends by their shoulders to knock some sense into them or even anyone I meet like you.
On the other hand, I am having less and less to say to the people I keep in touch with in the U.S. Our lives are just so different, and I sometimes feel like I am holding on just to hold on.
Unfortunately, I think most of these people are going to find out the hard way. And the way the world is spinning these days, they don't have very long.

Also, people's arguments especially chinuch blow my mind. Do they not know the kind of technology and innovation that comes out of this country? And if they are talking about Torah then I really have nothing nice to say about that.

The last line I'd change from "we need you here" only because it is them who need to be here.

While my wish is for all Jews to return home by choice and love of Hashem, the fact is that Am Yisrael in Eretz Yisrael will continue to grow and prosper. Just like the Jews in Egypt who didn't want to leave, the Jews in the Diaspora will find a similar fate.
-Chanina

Remind them that "they may miss the boat" or like the animals who refused to help The Little Red Hen, end up empty-handed.

How's about offering a bracha to those who aren't yet on your side of the Sea (as I'm sure many did for you while you waited for the time to be right for your Aliyah)? Try "May Hashem help you resolve the issues that are standing in the way of your Aliyah" or "May Hashem help you strengthen your desire to be b'Eretz HaKodesh to the extent that the obstacles will become surmountable". No human being can know precisely what another's issues or obstacles are. What might seem trivial to you might be HUGE to someone else. (What might have been HUGE to you all those years might have seemed trivial to someone else.) My bracha to you is that by blessing others you will find the love to replace the anger and frustration.

my sentiments exactly. i feel frustrated at their intransigence and really frightened for their future, grateful, so so grateful we are here. thanks for speaking for all of us.

The sad fact is that most people don't get it. When we were younger, we didn't either. Most people go about their daily lives disconnected from their Souls. We know that Hashem sends us messages in various ways, yet people don't see or hear it. Hopefully, they will before it's too late.