What Goes Up, Must Come Down 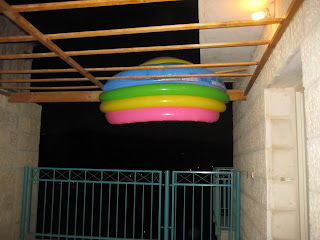 Often, in the late afternoons outside our apartment, we get heavy winds.  Since there are no buildings behind us or in front of us, leaving our front door at that time of day feels like stepping into a wind tunnel. Sometimes it's good for a laugh.

Over Shabbat, our downstairs neighbors' partially-inflated kiddie pool flew up in the wind and attached itself to our fence.  I tried to dislodge it, but to no avail. The winds were too strong.  I assumed that, when the winds died down, it would detach itself and fall back down.  Instead, it flew even higher, to the poles of our sukkah porch. And there it remains, even after Shabbat ended.

Somehow, this seemed a fitting metaphor for my recent visit to the States.  It was a very difficult trip, logistically certainly, but mostly spiritually.

On the positive side, I had the pleasure of being able to reconnect with old friends, many of whom went out of their way to offer concrete assistance and emotional support.  To realize that, despite the distance, the bonds of friendship still exist, was very comforting.

And there is, unarguably, excellent shopping to be done in the States. After having lived and shopped in Israel for a full year, I was momentarily dazzled by the brightly lit, wide aisles and the incredible variety of relatively inexpensive merchandise available everywhere.

And there is so much water!  It rains on the East Coast in the summer.  In fact, in one particularly torrential thunderstorm, I was reminded of the anxiety I used to feel because such storms held great potential for flooding the basement of our old house.

Admittedly, the cheesy magazines in the nail salon and the car repair shop waiting room do not represent the best of America, but the shallowness of what passes for popular culture shocked me. I watched a romantic comedy powered by low-grade, sexually-charged humor.  I watched it, but I felt guilty and disappointed in myself the whole time.

I was disoriented much of the time I was there, the way one feels the first day out after having spent a week in bed on cold medicines. I was driving down familiar streets, stepping into familiar places, but I had changed in some very notable ways.  This was no longer my life.  And I felt the dissonance.

I missed hearing and saying Shabbat Shalom to everyone starting Wednesday evening.  I missed the sense that my life has a higher purpose.  I felt, in some visceral way, the absence of the Shechina.  I had a great deal of difficulty feeling connected to G-d.  I didn't lose intellectual awareness of G-d.  But I could not feel my neshama.

What went up, came down.

Due to multiple delays, flight cancellations, missed connections and a heap of bad advice dispensed by the airline, it took 48 hours to get home.  It was as if the potent pull of the profane was trying to hold me back.  I told my mother, only half in jest, "Don't get remarried, don't get sick and don't die.  Because I'm never leaving Israel again."

We just ended my first Shabbat back.  Over Shabbat, I started a new Torah learning project, one that had been scratching around my head for some time.

And I have begun again to breathe.
Posted by Rivkah Lambert Adler at 10:34 PM

Good to have you back, to Israel and to yourself, my friend.

May you go higher and higher, without any need to come down.

I can't believe you wrote that you felt disconnected from the Shechina in the U.S. - that's EXACTLY how I feel the moment the plane glides over the Tel Aviv seashore on the way to chutz la aretz - I always start crying. Our souls are so tied to this land, we are truly like fish out of water when we leave. My parents are gone now, aleyhem ha shalom, so I don't feel the need to leave Israel anymore. (But I will miss the shopping there. HaHa)

We are coming up on two years not having to travel outside of Israel. Soooooo thankful. Felt the same as you the last time we were in Baltimore. I sometimes wonder how we ever lived in galut.

you nailed it: feeling like i "spent a week in bed on cold medicines"... that's exactly the feeling i had when we visited last yr! felt totally "out of it" and overwhelmed at times and completely baffled by things i just overlooked or was just used to when we lived there

Imagine HAVING a cold and going to 7 Mile Market the first day of my first visit back in five years. SO disorienting. You nailed the imagery. Shabbat Shalom from your friend who misses home terribly -- I'll never make my peace with a thriving Jewish community here, which I guess compounds the physical debilitation of the headcold.

Those visits get stranger and stranger. Actually, now that I've been going annually, there's a routine, but it's still funny that I sound like a native but feel like a tourist from Mars.