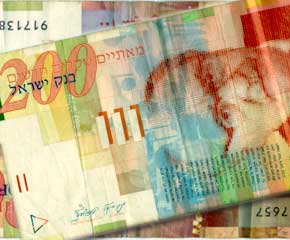 When we came to Israel on aliyah, I was absolutely mentally and emotionally prepared to make many sacrifices in the material realm - much smaller living quarters, less convenient transportation, more difficult shopping, tighter budgets, harder work for much, much less pay, and on and on.

This morning, as I prepared for Shabbat, I cut my way inexpertly through a whole chicken (which we buy because it's much, much cheaper than buying chicken parts).  I also had to defrost and then hand cut the frozen broccoli for the broccoli quiche because the 10 oz. boxes of chopped broccoli that were a staple on our US shopping list are not available here.  More than half the recipes in my recipe book are defunct now because I can't get the ingredients they require.

The transmission in our 2001 car (our only car, the one that I hardly ever drive because gas is the equivalent of $8/gallon or more) went up on Wednesday without warning and had to be replaced. Not a small expense.

In the US, we were often in a position to save money each month.  We live a much, much simpler material life here and money is,without question, much tighter.

I anticipated that.  Every day that I take two buses to work and two buses home for what would be a 15- minute commute if I drove in a private car, I am aware that we are called upon, in all sorts of ways, both significant and negligible, to sacrifice in the material realm to live here.

I'm probably not like the majority of olim, but I often feel that I would be willing to sacrifice nearly anything to live here. If I were forced to live in America again, I'm convinced I would shrivel up and die, right in the driver's seat of my brand new Toyota or in the living room of my 4-bedroom, 3-bath private home.

Frankly, it's very difficult for me to relate to olim and prospective olim who are drawn to the idea of aliyah but conclude that the material safety and security in America is just too hard to walk away from.

For starters, I believe it's illusory.  Hashem runs the heavenly treasury and can provide for people in Israel just as easily as He can in Indiana.  The material sacrifices I make to live here, I make with love. Ironically, while I'm intellectually aware of our diminished standard of living, I don't generally experience deprivation.

I also believe, as I've written many times before, that the easy material life outside of Israel is coming to an end as the Diaspora shuts down.

I do understand that college students who plan to make aliyah after they "finish their education" think they're making a wise choice, but I believe they are, in the end, choosing material goals over spiritual ones.

Please don't misunderstand.  We live a much simpler material life here, but thanks to Hashem's loving kindness, we are not living in anything remotely resembling poverty.  It's not what it was in America, but it's not the agony of being unable to put food on the table either.  While we do live with economic uncertainty more than ever before, I, like many others who successfully adapt to life here, choose to see it as an opportunity to rely even more on Hashem.

More than anything else, perhaps it is exactly the willingness to live with economic uncertainty that separates those who come, and stay, from the all the rest.

I'd call the American economy the "uncertain" one. Here it can be tough, but basic expenses like medical and education are easier to afford. That's why families here are larger.
Maybe you need a different cookbook...

We all like to say that we "sacrifice" to live here. I KNOW that you don't feel that you are sacrificing, but I just wanted to point out that I don't really feel that way at all. Fortunately, for now, we have no need for a car and when we do, we know we can rent. As you know, the bus system in Israel is amazing. At least I think so. We have discussed this before, but the quality of life here is so much better that you can't even feel that you are "sacrificing" anything. Granted, I am not working my @ss off everyday in some manual labor job, but it does feel like living here is a vacation. A friend of mine said to me not so long ago, "You know, my husband and I work really hard but living in Israel, every day feels like a vacation". She cuts my hair and has worked as a caregiver and a metapelet. Not easy work. Her husband recently started working at Ben Gurion stamping passports. Not as brainless as it sounds btw. Its a good job. They are chiloni from Ireland and have been here many years.

In any event, I think once you get used to the adjustments in the "standard of living" here, I don't think you even realize that you are living a different material life than in America. Btw, if you want to tell me what recipes you feel you cannot make here, maybe I can help. Also, I know how to cut a whole chicken as I also buy whole for the same reason. And frozen at 12.90 a kilo. Haven't had a problem yet. The one thing I can't really make here is a strawberry mango salad because of the season. A couple of times they have overlapped but barely. But isn't it cool how all the fruits and veggies are seasonal? Its so exciting when a new fruit or veggie comes in season. A good way to always appreciate them.

I think you are 100% correct about the materialism in America. There is no other logical reason in this day and age that people are not making aliyah.

And right now for us, finances are an issue, but all other things being equal, I feel that life in Israel does not and cannot compare to life anywhere else for a Jew and especially an orthodox Jew. Unfortunately, for most, Israel is just a fun place to come visit and hang out in town.

This post rings so true for me. I am not sure if our economic standing is diminished because as you know, after you make aliyah at first, you have no clue what bills are, etc. But I know we don't eat out as much as we did, when we go out...we usually just go for a soda or ice coffee and not a meal. I pack lunch like I always did and I know our food budget is significantly higher but we eat here much more often so I am not sure how that works.

I don't feel deprived either and actually feel quite enriched. What I cannot do materially, like tool over to Target and tithe my weekly $100, I instead change to quality time with my friends and family and that means more to me than anything. Today as I welcomed Shabbat surrounded by my friends at Cafe Cafe filled with hugs and smiles and just good times...well, it was better than anything I could think of!

I could not live the American "dream" anymore...I completely get what you mean! And I don't even remember the car...we came without. At first the 1.5 mile walk to and from work was kind of hard and now it's nice (except when I fall and break my teeth). I accept that this is MY Israel...it's more than I could ever have hoped for.

Very interesting, but I'm sorry, I can't relate to feeling of economic uncertainty. It's never happened. Whenever I need money, Hashem sends it. He did that for me in Chicago, and He does that for me here... At my job, things are really slow in September, and will be in October, too. Since I don't get paid if I don't work, I realized I needed some help. On a Sunday morning, I asked Hashem to send me parnasah. I asked Him again on Monday morning. Around noon I saw a notice on FB that someone was looking for English-speakers. I called, had an interview at 5 p.m. and started working at 5:15.

We feel like our sheffah/pipeline works the same way here- beli ayin hora- we sold the car, the house and gave up a good $ job- to follow Hashem's will- that is emuna. Emunah takes work to free yourself of fear and to really live like you trust Hashem. Everyday I find new reasons to love it here. I'm so glad we jumped into the Red Sea-as the song goes. We were surviving in our big houses- now we are living.

Who is a wealthy man? One who is happy with his lot (or his little).

HKBH ALWAYS gives us exactly what we need, exactly when we need it.

The challenge that most people have is they have put their desires ahead of doing what G-D wants.

We are living in the palm of HKBH and he carries us from challenge to challenge. While we have always felt this, we see this much more clearly here in Eretz Yisroel, the Land that HKBH gave to Klal Yisroel as a Heritage forever.

Hillel Levin
hillel.leib@gmail.com
Shiloh in the Heartland of Eretz Yisroel, not a Judeinrein Palastine.

We have to earn living here. It's not supposed to be easy. Whether it's a financial issue, finding the right school for our children, language barriers, culture differences, or finding that American food substitute at the supermarket we all have tests.
I find that a positive attitude and the gift of laughter gets me through.
We have been living here for a little over a year and both my husband and I still feel like we're on vacation. It is such a gift & such a blessing to be living in the Land!!
Rivkah, I have some great cookbooks that you are welcomed to borrow any time!

Living in Israel is a privilege, not a sacrifice. If you feel that you are sacrificing it is because you are so wrapped up in materialism.

I can so relate to what you feel!!! If I never see america again, it would be too soon. Like you, I'd shrivel in America to death while the maid is cleaning my 3 floor home...
But in a less than 3 room apartment in Jerusalem, I am most alive. I feel that only here I am able to connect with HaShem on levels I never thought were possible. I rely on HaShem and constantly talk to HIM -- something I never even thought of doing while living in America. Is there anything more delicious than being able to walk in the holy land and feel the Divine Spirit wrapping you with love????

As freshly minted olim making our way, this really resonates. Thank you!