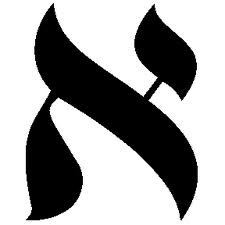 Back in the Old Country, when I was still a rebbetzin, there was a woman in my husband's congregation who wanted to study for an adult Bat Mitzvah.  She had wanted to do so for many years, but she was paralyzed from beginning because she thought she would have to learn to read Hebrew, and she didn't think she could do that.

I began meeting with her every week.  First I taught her the shape and name of the letter alef - the first letter of the Hebrew alphabet.  Then we went through a Hebrew prayer book and, moving her finger right to left on each line of text, she stopped at every alef she found and said, "alef".

The next week, we added the letter bet.  Then gimel.  Before long, she purchased, and was using, her own large print Tehillim. She would move her finger from right to left on each line of text, calling out the names of the letters she recognized.

I added a new letter or two each week, and at the beginning of each lesson, she would tell me how she had stayed up until the wee hours practicing.  When my husband and I went to Israel for two weeks, rather than missing any time, she asked me to teach her four letters before we left. And while we were gone, she practiced like a demon.

In time, very gradually, she learned the names of every letter in the Hebrew alphabet and, in her way, could "read" any Hebrew text.  She often exclaimed how things in the shul were opening up for her. She could distinguish letters on the yahrtzeit plaques, in the prayer book and on the aron kodesh. I had her "read" the chapters of Tehillim that Jews around the world were saying for the safety of Israel.  She always used to tell me that, in her next life, she would be born a sabra.

When we studied together, she was 80 years old.

After she mastered the letters, we tried to move on to vowels, but I could see that it was too much for her.  Instead, I taught her to recognize the shapes of a few common Hebrew words - shalom, Israel and the two ways that God's name most often appears in print.  By then, she could "read" her text, letter-by-letter. And when she got to one of the names of Hashem, she would stop her finger, point, and say, "Hashem!" and look up at me with a huge smile.

It was a rare privilege to teach and know a person who, though lacking formal Jewish education, possesses a neshama that is so wide open.

Sally, you are still my Jewish hero.