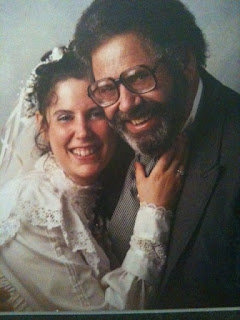 My father died 17 years ago today. In this picture of us together, he was four years younger than I am now. When this picture was taken, we didn't yet know it, but his tragedy had already begun. I have more recent pictures of him, of course, but the later ones are too hard for me to look at. I can see the disease in his eyes. Here, although the symptoms had already begun to surface, he still looked relatively normal.

My entire adult life, until his death 17 years ago, my father suffered from bipolar disorder, more commonly known as manic-depression. Although there is no known cure, some people with this diagnosis can, with long-term treatment, live relatively normal lives.

My father was not one of those people. His mood swings were huge, his depressed periods were prolonged and his manic stages were known to be destructive. When his disease was full-blown, it was not easy to be with him.

In the end, he died from pancreatic cancer, just weeks from diagnosis until death.

The last time I saw him, I was 10 weeks postpartum. I flew from Baltimore to Florida with my newborn daughter, today a senior in high school. I laid her down on the bed so my dying father could meet her. She was pink and wriggly; his skin was jaundiced from cancer. The memory of that contrast remains strong. Except for his voice, he was unrecognizable to me. Always a hearty man in life, he lay on what was literally his death bed, his body a fraction of its former self.

Ironically, my father, who was more than once picked up by the police in his manic phases, who spent time in psychiatric wards, heavily medicated and strapped to the bed lest he hurt himself or others, who called me at 3 AM with delusions that he was at the Kotel (which he always called the Wailing Wall) was utterly lucid in the last days of his life. As we sat talking, a Chanukah menorah at the window, I was able to ask him everything I always wanted to know about him and about our family. He sometimes waxed philosophical with me. "Don't be afraid," he advised, "Death is a part of life."

Although his bipolar disorder eclipsed the last decade and more of his life, I always knew, from my earliest childhood, that my father loved me.

Once, long ago, just before a birthday, I spotted an unfamiliar carton in the trunk of our car. My father told me it was a tire. How old was I at the time? Seven, maybe 8 or 9? Knowing my father was in the auto repair business, his answer made perfect sense. But the box actually held a doll house, a fantasy gift for a little girl.

That story is my father to me. He created worlds, for what is a doll house if not another world? Sometimes he did it with words. Sometimes with gifts. He created worlds when he decorated our homes. In the house of my childhood, there was a game room with a built-in wet bar. In our adolescent rec room, we had black-light posters and the special bulbs that made them pop. My sister and I shared a room where everything was matching shades of green and blue. I had already moved to college by then, but I remember a room in another house with an African jungle theme. And I remember the Jewish theme, the symbolism of which I neither understood nor appreciated at the time. My father constantly created other worlds. Perhaps he was always trying to escape the chaos in his mind.

Once, when he visited me in Baltimore after I was already religious, he came to shul on Shabbat morning. Although we sat separately in the small Orthodox shul that was my first spiritual home, I recognized that the men had called him up, as a guest in the congregation, for an aliyah. Gevalt! What did my father know about getting an aliyah? They were going to have to feed him the words of the bracha slowly, one at a time.

I was startled to hear him make the bracha, as loudly, clearly and confidently as if he had just done so the Shabbat before. Walking home later, I asked him how he pulled that off.  "Didn't you know?" he answered with a sly smile, "My bar mitzvah was in an Orthodox shul. It's like riding a bike. You never forget how."

My father was too sick to ever really discuss my return to traditional Judaism, but I have often imagined that, had he been well, he too might have done teshuva and been living as a Torah Jew today. He might even have retired and come to live in Israel near us - me, my husband, children and my brother, his only son.

When I lit the yahrtzeit candle for him last night, I thought of how, when I see him again, he will be well. My father's disease was a force in my life for a very long time. But his love was even stronger.

When I first met my husband, his physical resemblance to my father spooked me. We married in the late afternoon on the 7th day of Chanukah and, though we didn't realize it when we set the date, that night was my father's second yahrtzeit. My brother, sister and I, uncharacteristically together on that date, lit yahrtzeit candles for him in the wedding hall.

Newly divorced with two young children, I met my husband almost 18 months to the day after my father died. Eighteen is a pretty significant number in Judaism. It's the numerical value of the Hebrew word chai, which means life. Once the disease infected his essence, my father could no longer take care of me. But he had a hand in sending me someone else who could. And he sent someone who resembles him, so I wouldn't miss the gift. 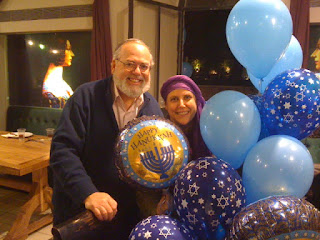 Fifteen years later, my husband, who never met my father, and I celebrated our Chanukah wedding anniversary in Jerusalem. I often think that my husband embodies all the best parts of my father, a reflection of what my father might have been, without the calamity that was his disease.

I got the message, Dad. Thanks for looking out for me.

Beautifully written. Surely a zechus for an aliyah for your father's neshama. May he continue to be a meilitz yosher for you and your family and all Am Yisrael. (P.S. Happy Anniversary and many, many more in good health and b'Eretz HaKodesh.)

I noticed the resemblance to Elan as soon as I saw the photo. This is very moving - thanks for sharing it!

It is too bad that when he was alive, he (or you) did not know of the work of Dr. Abram Hoffer of Canada who cured tens of thousands of people with schizophrenia and bi-polar problems with mega-vitamin doses of Vitamins.


In you father's merit, I want to share a little bit of information with your readers, which may help some of them. Anyone who is interested can check out the work of Dr. Abram Hoffer of Canada. He cured tens of thousands of people with schizophrenia and bi-polar problems with mega-vitamin doses of Vitamins. He did this over a period of tens of years, while holding prominent positions in Canadian hospitals.

Beautiful and touching. Thanks for sharing!

What a touching tribute to a wonderful Man. I had spent a lot of time with him in and after some of his troubled years - he was deep in love for his family and in his faith! Focusing on all the happy days, weeks and months far overshadows the difficult days.

Very touching and very daring to post on such a public forum. Hats off to you and him. May his neshoma continue to shep nachas from you for many years to come.

Thanks for sharing; I so much enjoy hearing stories of friends' parents. My father's second yartzheit is approaching. I understand your sentiments very deeply, as I too had a loving relationship with my father and the loss is very deep. Your father must of been an amazing person, because, eventhough I never met him, we all know you and your husband are so special and the apple doesn't fall far from the tree. May you enjoy your fondest and sweetest memories of your father now and always. I'm sure he is shepping nachos from you everyday.

My father, too, was bipolar, suffered terribly, and died suddenly from pancreatic cancer. He too was very lucid in the end.

While terrible, his death was the release of a tremendously good person trapped in a body with a mind that tortured him.

I am convinced that his suffering was an atonement and that his place in heaven is in the highest of places. He actually visited me in a dream (the only dream in which I ever smelled - for those who know!). I asked him how Gan Eded is. His reply. . .

I am sure the same goes for your dad too.