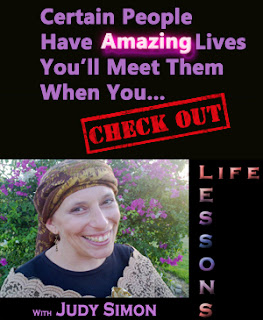 Judy Simon hosts a show on Israel National Radio called Life Lessons in which she interviews people and encourages them to share their life stories and what lessons life has taught them.

Judy gave me the great privilege of being interviewed on her show last week. She started out asking me about my grandparents and, very gently, guided me through many of the milestones in my life to talk about my twin Jewish passions of today - aliyah and geula - and how I got here.

Short of those of us who become famous enough to write autobiographies, I don't know how many of us have the chance to connect the dots and tell someone else our life's story in something resembling chronological order. Since we tend to live our lives in day-long or week-long segments, it's a tremendous experience to have someone help you put the big pieces together in a story about how you became who you are and about what you've learned over the course of your life until now. Judy Simon gave me that gift last week.

This is what Judy wrote about our conversation. I would be honored if you would click the link and listen in.

Rivkah Adler was raised in an unaffiliated home and knew very little more than that she was Jewish. To her, religious Jews were old, living in Florida, and mostly a dying group of people. Until she chanced upon an advertisement for an Introduction to Judaism course, in which she turned out to be the only Jew. Having graduated from her course, Rivkah considered herself knowledgeable, until she failed a pop-quiz about Judaism, which led her to a one-on-one learning partner. Slowly but surely, Rivkah's life was becoming increasingly Jewish and G-dly. Years later, happily married to an Orthodox rabbi, Rivkah thought she had found her permanent home and began looking for a cemetery for her future internment.
Then, on September 11 2001, she had an epiphany that would change her life. America could never be a permanent resting place for the Jewish people. It was simply another host country in a long list of those. She realized that she would have to make Aliyah one day. But she also knew that that day was far in the future, as her family had had no such epiphany.
Thus began Rivkah's blog http://bataliyah.blogspot.com, in which she encouraged others to make Aliyah as she prepared herself and her family. The story of her actual Aliyah is so moving, that you'll just have to tune in to hear it. Now living in Israel, Rivkah had a new epiphany: The Geulah is on the way, and we must prepare for it. As her life continues to grow and become more spiritual, Rivkah encourages others to do the same in her forum, Geulah Watch. Tune in to hear this warm, optimistic, and engaging woman share her spiritual journey.

Well. You know I love you. And I knew pieces of the story already. But hearing you say it over with your delightful sense of humor, and hearing the "more historical" aspects, made me love you even more.

What a blessing you are!

And you are right: Judy is an excellent interviewer. May you both continue in your very special missions, with as yet undreamed of success.