Sometimes it's good to get out of Jerusalem and see something new. I've wanted to visit Eilat for the longest time. This past week, we had the opportunity to go for a very short vacation. How different from Jerusalem!

While we were there, we were awed by the fact that the Eilat airport is smack in the middle of the hotel district.

We also goofed around a little. 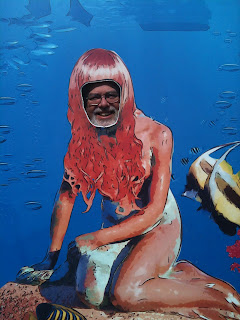 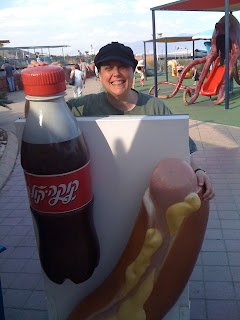 Just noticed the similarity between "goofing" and "gof" (גוף). There's lots to do in Eilat for the gof, and plenty of it is not kosher. Not so much there for the neshama. But it is also Eretz Yisrael, so I tried really hard to think of something spiritual about the place.

When we went to the Underwater Observatory Marine Park, I thought about why Hashem created so many different kinds of fish. And, at the Underwater Observatory, looking through dozens of windows into a world of fish and coral (which are living organisms and not just rocks), I realized that just as there is a whole unseen life under the surface of the water, so there is a whole unseen spiritual world. 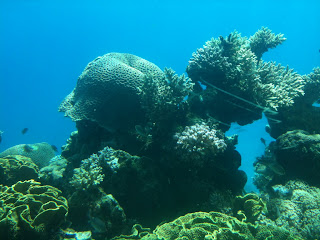 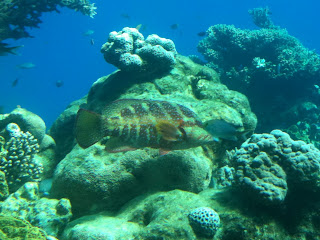 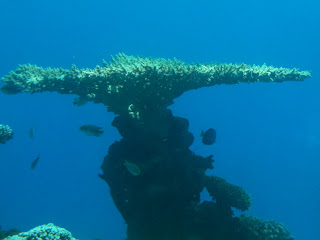 We think we know what an ocean looks like, or what the world is like, but what we perceive with our five senses is only part of the real story. There is so much more that we can't necessarily perceive or name. But just because we can't perceive or name something doesn't mean it doesn't exist.

For example, on the bus ride home, I had a strange sensation for which I have no name. I began to breathe more deeply as we approached Yerushalayim. I felt my neshama, which had been in some kind of suspended animation while we were away, slip in and lock back into place.

Those who know the city better may well claim that I totally missed the essence of Eilat. I'm open to that possibility. All I can say for certain is that I experienced Eilat of relief to come home.

Posted by Rivkah Lambert Adler at 2:48 AM

If you want to experience a more "hamish" Eilat, go during Chanukah. It's packed with of dati leumi families and teenagers.

Eilat is perfect to recharge your batteries. So great you got to go away a bit!

Eilat is on the Sea of Reeds. We say Shirat Ha Yam here over Pesach right at the Sea. It is a very holy spot for those who come looking for that. The former Rebbe of Chabad has scheluchim here and if you went to a Minyon at one of the great Chabad Houses here you might find them filled with Baalei Teshuvas. The Rebbe said Torah will come forth from Eilat. This year alone many new Sefrei Torahs were dedicated to the Shuls here.I think it is Lashon Ha Ra to talk about any city HaShem has given B'Nei Yisrael. Eilat is a place King Solomon came and is mentioned in the Tanach. You only have to go up the hill towards the spectacular Eilat Mountains to see the spirit of Eilat. It has Jews living here with the same Neshama as Yerushalim. Those who live in Eilat are far from the center of Israel but are near 2 important borders.