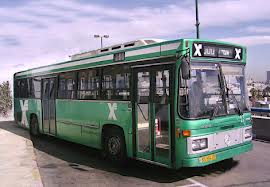 And I want to do it again.

We're in choref zman, winter time, in Israel. Not literally as in snow and ice, because the weather is still relatively mild here, but in terms of the clock, which we set back already, a few days before Yom Kippur.

It gets dark pretty early in this part of the world.

Last night, I went to see the daughter of dear friends perform in a production of The 25th Annual Putnam County Spelling Bee. It was fabulous community theatre, by the way. Funny. Touching. And in English.

It took two buses and nearly 90 minutes to get there. It's funny how my relationship to travel time has become more elastic in Israel. In 90 minutes from Baltimore, I could be halfway to Newark airport. Last night, I traveled less than 15 miles.

It was pure, tear-inducing joy, spending those 90 minutes driving through Jerusalem on a Thursday night, listening to oldies on my "Nostalgia" playlist. Through the bus windows, I got to see:
But more than that, the ride was filled with a special kind of I can't believe I get to live in Israel bliss, watching the endless parade of humanity, my peeps, boarding and alighting, as I traveled to my destination:

In my neshama, I was living out the adage on this Arabic-Hebrew-English, only in Israel, sign. 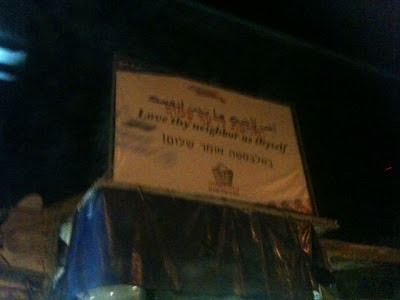 Rivkah, you are so right. This is absolutely, for me, the #1 hardest challenge of aliyah. In fact its really the only challenge for me.

very true. Not being with family is by the far the hardest thing about living here.

nice post! sounds very special. i always appreciate your posts, bc they give me encouragement to keep our commitment to aliya (2 yrs away).

So cool. You have a good eye for detail. Thank you for sharing the rich tapestry of life in our Homeland.

I can feel and see every description you share, and greatly look forward to coming home, and staying home. badonna