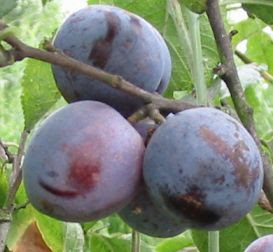 I step out into the early morning, before the sun peeks over the rooftops and washes my salon it its brilliance. The plums are ripe and dangling over my mirpesset, the tree reminds me of a childhood book illustration - the sugar plum tree always held fascination.  Ripe fruit for the picking, like life's opportunities, will shrivel on the branch if not enjoyed at the right time.  I fill my bowl.  I will share these with my neighbor, my shabbat host, I will cook plum chicken and let the purply juice sweeten the sauce.  I will taste the sweetness of life and dance like a sugar plum fairy.

Summer is here and up the street in Bustan Brodi the ripening pomegranates hang covered with bakery bags for protection, like some sort of bizarre cheese danish tree.

How did it get to be summer so fast?  Spring was a blur of apartment hunting activities, days bookended with internet searches, peppered with realtors and punctuated with architects and building engineers.  I barely remember Pesach and spent lots of time looking up while walking down streets - for the perfect mirpesset to buy, an inviting building, a peaceful setting.  After ten weeks of intensity, a deal was made but fell through at the last minute.  Now wiser and far more educated about the whole process, I look forward to resuming the search in the fall.  It's a whole new way to tour the neighborhood - from the inside out.

It was our fourth year of aliyah, but a year of many firsts.  My first time appearing in billboard advertisements on Emek Refa'im, a total surprise after the August photo shoot with fellow teachers and Studio 6 students.  What a surprise to cross Tzomet Oranim one day a few weeks later and look up to see myself smiling down at me, character shoes and all.
Our first election, voting for the 19th Israeli Knesset; our first European vacation together -  to the south of France.  Our first succah in Israel, purchased on Rehov Palmach and slung over our shoulders like giant skis for the three minute trek home.  We managed to nab the prime garden spot in front of our building, just below our mirpesset.

One message of Succot is G-d's ever-present protection, but attending a lecture from the Home Front Command couldn't hurt either.  The "Pikud HaOref" - literally "the command for the back of the neck" - instructed us on staying safe during a missile attack.  We learned more than we ever cared to know about the physics of shock waves and shrapnel.  A few weeks later there were a two air raid sirens in Jerusalem.  During one we got to meet neighbors from the next building in our shared bomb shelter; the second siren was mid-day, mid-week and I never heard it through the thick walls of my modern office building where our physical therapy practice is located.  Marty, out on a bike ride, got prone on the ground until ten seconds after the siren ended as we had been instructed to do if out in a place where there is no shelter.  Fortunately no damage was done by the missiles, may they be the last ones.

All of this was quickly forgotten when my attention turned back to the myriad choreography and dance projects of the year.  "Anything Goes", the Jerusalem Speakeasies Cabaret, the One Billion Rising flash mob. I studied ballet and tap and I found myself teaching up to five classes a week, including a Pilates Dance Lab, a private class of bereaved mothers and ninth graders at the Hartman Girls School.

Teaching in a mirror-less temporary classroom, with dusty floors and walls lined with posters of Chemistry Nobel Prize winners from the Technion, I push aside the desks and chumashim and spread out my Broadway Jazz CDs. The girls come bouncing in and together we became "One Singular Sensation". Fourty-five minutes later they are singing their way to their next class.  The burly school guard bids me shabbat shalom even though it's only Thursday and I step out onto bougainvillea-lined Rehov Elroi.

A passer-by might be surprised to hear "Hot Honey Rag" coming from that temporary classroom.  Jerusalem is full of surprises.  Was it my imagination or did I hear a cat meow "Oy", a baby babble "Dayenu"?

You don't have to get drunk to become confused on Purim, reality is confusing enough.  From the Arab children getting their faces painted at the Mamilla Purim festival, to the "grogger" smart phone application one woman used at Shir Chadash's megilla reading.

In early spring we munched our way down Mount Gilboa dotted with its famous purple irises and red calaniot, tasting white garlic flowers and hyssop, wild sage and sugar flowers.  Another time we plucked ripe figs from a grand old tree. Yum.

We cycle on the new bike path through the village of Beit Safafa exchanging "boker tov"s with Arab women in hijabs and Nikes, mutually admiring each other's six-in-the-morning determination.  The new path is a welcome improvement in the urban landscape.

Le'at, le'at.  To my amazement, the Jerusalem Light Rail has actually hired workers to instruct the populace in the correct way to get on and off a train.  Standing at the train doors, handing out brochures and little candies with a simple picture and a simple message, "Kodem yotzim, v'achar cach nichnasim". "First people get off, then you get on."  Yes, it is pathetic that this kind of education needs to be done, but it really has made a difference.

They say that Israelis are like sabra fruit - prickly on the outside, soft on the inside. Strangers look out for one another and acts of kindness are everywhere.  I watched one woman get up from lunch with her family at a shopping mall eatery to carry packages to the parking garage for another mother struggling with a tantrum-y toddler. My own good samaritan efforts on-the-street: alerting novice cyclists when their bike seats are too low and gesturing wildly to motorists who forget to turn their headlights on at dusk. Tikkun olam, bit by bit.

As we end this year of firsts Marty is already embarking on an unlikely repeat.  For the second time he is riding in Bike 4 Friendship http://sponsor.bike4friendship.org/mgordon555
from San Diego to New York City with a bunch of cyclists at least forty years younger than he.  Kol Hakovod Marty!

Doves coo and flutter outside my kitchen window.  They splay their russet and gray feathers and alight.  My senses are filled with Jerusalem and my soul is at home.  Soon I will alight and fly to my first homeland.  Hope to see you there.

Wishing you abundance and sweetness.

From my mirpesset with love,