In this post, Mordy Oberstein from Baltimore speaks eloquently of the spiritual trumping other concerns regarding the decision to make aliyah. In my opinion, living your life so that, as often as possible, the spiritual trumps everything else, is a huge benefit of life in Israel. 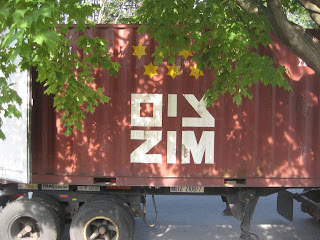 I want to share some thoughts and feelings that I recently had about the experience of making Aliyah, more specifically, the process of making Aliyah. My family is moving to the land next summer and we are in the midst of preparing to begin the next step of our lives, no easy task.

Ever since I returned from my pilot trip in July our attention has been on navigating the process of entering the job market in our current professions. My wife is a nurse and I am a teacher. Both us need to transfer our licenses over to Israel. The process of transferring our licenses and having our degrees recognized is to put it mildly, extremely complicated. For instance, even though I have a Master’s degree from a prestigious university, my Bachelor’s is quite problematic, due to the yeshiva credits the college transferred in. The Ministry of Education may not even recognize the degree due to the credits, which subsequently means they will not recognize my masters either which would result in a pitiful teacher's salary that for all practical purposes would mean I could not be a teacher in Israel. Needless to say I have been hounding every person possible to determine if this is indeed a problem for me. After weeks of contacting scores of people I have found an answer, namely that there is none, it all depends on who is sitting behind the counter at the ministry when I show up with the documents and degrees.

The result of this conclusion is a state of flux, I have no concrete reality in which to base any security on. You could only imagine the stress, here I am, moving to a country 5,600 miles away where I can hardly get by with the language, trying to make it and support a wife and two kids. But to be honest the biggest fear I have is being forced to return to America, to leave G-d, and abandon him, and be forced to come back to a land where I am a "resident-stranger."

Oddly enough I have found my orientation, my bearings, I am feel no hesitation in surging forward to my new home. In order to share with you how I got to this point, and why it is so significant I think for anyone who is making Aliyah or already has, I want to relate another "conundrum" I am currently facing, as I think it is not of coincidental nature. As I mentioned I am a teacher, I teach in the inner city of Baltimore to a very difficult population, in a very difficult educational environment. The educational environment of America today, in my humble opinion, is extremely neurotic and unhealthy. Schools, principals, and even teachers are hyper-focused on test scores and academics, leaving the more intrinsic, internal, and subsequently spiritual needs of students to fall to the wayside.

Most teachers battle the conflict of how to reach the students, do what is right for them, and obtain a satisfactory evaluation at the same time. I can't really explain why necessarily, but this year I feel a deep calling to do what's right not for myself, not even for the students, but for G-d. I feel a profound need to help the students become more solid people for the sake of G-d, so that He may have his children redeemed and returned to him. As such, walking into this school year I don't care about my evaluation, I don't care if I get a good reference letter for Israel, I care to not let G-d down and to ensure I meet His/my destiny. Funny how this is, the feeling of forsaking my own welfare for G-d's, because this is how I view moving to Israel.

How can I move to a place where I don't feel any sense of financial security? Where my job possibly is topsy-turvy and where I can get no solid grasp of the situation on the ground? It is because I am not moving for myself. I am not moving to have some sort of transcendent religious experience or awakening, I am moving because I already have one.

I am moving for G-d. I am moving because G-d calls out from behind the broken walls of Yerushalayim beckoning me not to leave him alone in the ruins, to pull him out of the ashes of our history and to re-build, to "make his name rest there" as we just read in the Parsha. What happens to me, what becomes of me is not significant per se, it is only significant in so far as it affects my ability/inability to fulfill the want of G-d. This is what allows me the ability to overcome my fears and to leap into the unknown stormy waters of the sea, neck deep in the tides, as our great ancestor Nachshon did upon hearing the Egyptian army at his back. I am not concerned or afraid for myself, because I am afraid for G-d.

As Rabbi Soloveitchik points out in "Al Hateshuva", when one makes his fear the fear of G-d all other fears fall away, when makes his allegiance to G-d all other allegiances become secondary. As a result I walk away with a feeling (most of the time) that I will be successful, I feel this way because I feel that unlike Kayin, my offering is pure and G-d will not reject it, he will allow my gift to be received and will allow me to continue to give to Him so long as I leap with faith and everlasting commitment, so long as even the waters at my neck do not discourage me, he will draw me near to satisfy Him.

Do not get me wrong, I suffer from tremendous bouts with extreme doubt, but let me conclude with a recent event that occurred. I was having Friday night Shabbat dinner with someone and was telling them of my plans to shirk off the normal worries of a city schoolteacher. I told him that I was a Jew first and a teacher second, that I had a duty to fulfill as Jew in the world in a position of influences over children that trumped my role as an academic instructor even at risk to my personal well-being in the pragmatic sense. I was taken off guard by the response. He replied back to me, what does being a Jew have to do with your role as a teacher, why would you put yourself at risk, you may need the school administration for reference once you get to Israel?! I couldn't help but to have doubt on my position, which perhaps I was being too idealistic, too removed from the reality before my eyes and too involved in the majestic and transcendent, perhaps my whole outlook was simply an illusion?!

I want to tell you what I concluded. I have concluded that it would be a sin (not in any dogmatic way, but as something that would keep me further away from G-d's call). This urge, this calling to give to G-d for the sake of G-d is no weak phenomenon. It is a powerful calling from the depths of my being. There are times when we are unsure about a decision we need to make, and this uncertainty often stems from our natural inability to see things with perfect clarity. In such cases doubt, hesitation, and even the changing of mind is certainly warranted. However, there are times when something is speaking to us from within us, and this speaking is so powerful and real that if we were to ignore it we would be violating the greatest sin of all, insensitivity, deafness, to G-d's word and calling.

Sometimes something is so powerful so forceful (in an autonomous manner) that it would be a tragic mistake, a sin even to ignore it. What determines whether or not we should follow a certain notion is not only the logical validity of such a choice or decision, but sometimes the very thought and feeling determine its validity. Again, in Al Hateshuva Rabbi Soloveitchik discusses the idea of the Gemara in Chagiga (16a) that says "He who is not aware of the glory of his creator - it would have been better that he had not come into the world.” Rabbi Soloveitchik mentions the Gemara considers this to be a person who sees a rainbow for example and does not see the glory of G-d within it, but merely views it in a mechanic and scientific manner. That is to say, then when something screams at you the glory of G-d, you have no right to ignore.

Thank you for allowing me to share my thoughts.

Posted by Rivkah Lambert Adler at 10:00 AM

I so wish my family could make Aliyah. I feel the pull towards Israel, one that is irrational.