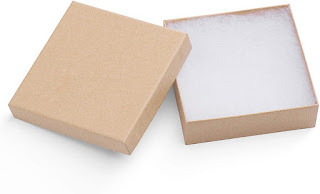 When I was a toddler, I had a kiddie-sized charm bracelet. A treasured possession, my mother kept it in a small cardboard jewelry box in a special drawer of her dresser. It rested on a layer of fluffy white cotton and was protected by a second layer above. On the rare occasions I was permitted to wear it, I squealed with toddler delight and pride.

That charm bracelet is the singular recollection I have of deriving pleasure from jewelry.

I have no conscious memory of the shift from toddler joy to total aversion to jewelry, but at some point in my childhood, it hit.

And it hit hard.

At 16, a family friend returned from vacation with a necklace as a gift for me. Without understanding why the thought of donning the necklace made me shiver with fear, I politely declined. My father, baffled by my refusal to graciously accept a gift from his friend, pushed and pushed until I ran to my room, crying copious tears of teen angst. Every one of us was embarrassed by the power of my seemingly irrational reaction to his gift, proffered with affection.

Months ago, I was sitting in my sister’s dining room. She and one of my adult daughters were sorting through bags of costume jewelry. In order to avoid looking at what they were doing, on a total lark, I picked up my phone and entered the search term “fear of jewelry”.

In that instance, I identified as a kosmemophobe. After decades of being physically disgusted by jewelry and assuming it was my own private weirdness, I discovered that my lifelong visceral aversion has a name and a small, internet-based fellowship.

During my first year of grad school, in a profoundly ironic act, I got engaged to a man whose parents owned an upscale jewelry store. During our engagement period, my future in-laws decided to liquidate their inventory and close the store. They needed extra sales help to work during the liquidation sale and my fiancé and I were conscripted.

For a period of months, several times a week, I stood behind the sales counter, forced to act as if my skin wasn’t actually crawling at the thought of touching the bracelets, diamond studs, rings and necklaces I was expected to sell. In retrospect, I don’t know how I got through it.

For reasons unrelated to my kosmemophobia, the marriage didn’t last. I knew it was definitively over the moment my ex-husband showed up for our first marital counseling session wearing jewelry.

For the past 24 years, I’ve been married to a rabbi, famous for his sense of humor, who had a jewelry saleswoman in his former congregation. One day, he visited her in her jewelry store on other business. Ever the saleswoman, she suggested that while he was there, he should look for a piece of jewelry to buy for me.

“My wife doesn’t really like jewelry,” my husband demurred.

“Haha Rabbi. You’re so funny!” she replied with total disbelief. Despite being in the jewelry business, she had never heard of kosmemophobia.

Though it’s categorized as a phobia, kosmemophobia isn’t actually a fear. It wouldn’t be accurate to say that I fear jewelry the way, for example, arachnaphobes fear spiders or those with claustrophobia fear being in a confined or crowded space.

Kosmemophobia is more of a repugnant aversion than an actual fear.  It was challenging for me to pick an image for this post because I had force myself to look at pictures of jewelry.

As quirky personality traits go, kosmemophobia is a relatively tame one. Over the years, I’ve developed multiple means of subterfuge to avoid coming into contact with jewelry. At craft festivals, I avert my eyes when passing the displays of handmade jewelry. In malls, I walk swiftly past the jewelry stores. Online, I quickly scroll past images of jewelry that pop up.

Nevertheless, there are social consequences associated with being a kosmemophobe.

I feel anxious touching people who are wearing jewelry, especially shaking hands with someone who is wearing a dangly ring or has a thin chain hanging from their watchband. I’ve never been able to be in a romantic relationship with someone who wears jewelry. In that respect, kosmemophobes who date women have it much worse than I do.

I can’t admire other people’s jewelry or help them decide which pieces to buy or wear, which can seem rude. When my daughters were growing up, they knew not to come to me for help clasping a bracelet or taking off a necklace. I enlisted the help of a babysitter to remove their earrings because I was so grossed out by the thought of touching them.

If I’m in someone’s bathroom and spot discarded jewelry near the sink, my stomach turns. I'm grossed out by  even the sight of it.

The only pieces of jewelry I wear are a watch and a wedding ring. My wedding ring is a solid, chunky piece of gold which does not set off my kosmemophobic revulsion. And, because I don’t have doraphobia, which is a phobic aversion to fur or leather, a chunky watch with a leather band doesn’t cause me any anxiety at all.

It’s okay. You can laugh.

I know it sounds eccentric, but I promise that if you met me in a jewelry-free context, you would never guess that I have a pathological aversion to jewelry.

Chances are, even if you don’t experience a specific phobia yourself, you know someone who does. More than 100 phobias have been identified and some are even more specific than mine. Leukophobia, for example, is the fear of the color white and pteridophobia is a fear of ferns.

Overall, phobias are more common in women than in men and the US National Institute of Mental Health estimates that 8% of adults in the US wrestle with at least one phobia.

You’ve probably seen the meme that advises, “Be kind. Everyone you meet is fighting a battle you know nothing about.”

Kosmemophobia is one of mine.

How interesting. I was a psych major in both undergrad and grad school,, and worked as a counselor for many years. Never heard of that phobia, nor had I deeply explored phobias in general. Your explanation would almost sound comical if I didn’t know your journalistic reputation for truth and fairness. Absolutely true about not knowing some of the struggles that others are having. Even knowing another person deeply and intimately doesn’t give us a complete picture of them. On the flip side of that, sometimes, we can discern things about someone that they themselves can’t see. Such a complex, baffling, interesting world GOD gave us to live in.

Thank you for an enlightening and thought-provoking article.