One Of Us Is Clearly Wrong 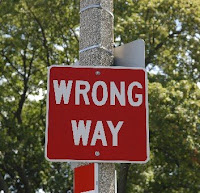 My husband recently encouraged me to gather a group of women together with whom I could talk about aliyah, moshiach and the impending geula. So I did. I found a handful of women and we had a very successful first meeting. We discovered that we are all very much resonating to the same spiritual strumming.

In some ways, the meeting churned up the heat on the issues for me. I am just about to boil over with anticipation. I feel like I am constantly sitting on the edge of my seat, on high alert.

One woman in our group directed us to a blog called Dreaming of Moshiach that she reads regularly. This blogger is either a spiritual powerhouse or a crazy person. Here are two of the more potent things she wrote:

1) In early October, President Bush will suspend the upcoming presidential elections indefinitely and that he will remain president. He will become known as the Biblical Gog (which sounds suspiciously like George).

And here's another thing. Economists agree that almost every major financial crash has happened in September/October, which is always Elul/Tishrei - that is, Rosh Hashana time. The current economic crisis/meltdown facing us is no different. Is this a message from Gd?

One more thing to throw into the chulent pot. The Facilitated Communication messages from religious autistic people are speaking to us in very strong language. This transcript of a message from just last month speaks of the short amount of time left and how urgent it is to come Home.

So here's what we have. A major economic crisis with the possibility that it could get much, much worse. An impending nuclear attack, Gd-forbid. Frequent "natural" disasters of biblical proportions. Arguably the most unlikely presidential and vice-presidential candidates in US history.

Is it any wonder I'm churning?

In an attempt to figure out whether we can do something now to protect our finances, my husband and I met with a frum financial planner. I wanted to talk to someone who could advise us from a spiritual perspective rather than just a conventional financial planning perspective.

And do you know what this person said?

He recommended one possible tiny tweak in our accounts and then to just sit tight because he believes that the market will bounce back and we will eventually recoup our losses and continue to earn. He gave us the 99% pure conventional financial planning answer, based on the assumption that the future will look much like the past.

One of us is clearly wrong.
Posted by Rivkah Lambert Adler at 7:56 PM

You're churning because you're buying into someone's mishagoss. Relax and have faith in the US constitution and in Hashem.

Some financial pundits in the know recommend buying gold and silver as a hedge against plummeting markets. The waters are just starting to churn. Hold onto the Rock.
Shalomis