Focus on the Light

On Tuesday, I sat glued to the Internet, along with most of Israel and many Jews and others from around the world, as I watched what I feared, deep down, might never happen - Gilad Shalit walking away from his Hamas captors, alive and in reasonably good condition after 5 years and 4 months in captivity.  More than 99% of Gaza, an area controlled by Hamas, is Muslim. 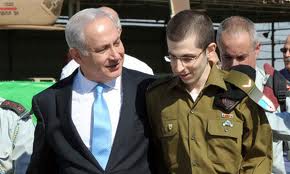 On Thursday, Muammar Gaddafi, the former dictator who ruled Libya with a deadly fist since 1969, was killed by opposition forces in Libya. Libya is 97% Muslim.

And on Sunday, a 7.2 magnitude earthquake hit Turkey, killing hundreds and injuring over 1000. So far.  The death toll is expected to rise much higher. Turkey is 99.8% Muslim. 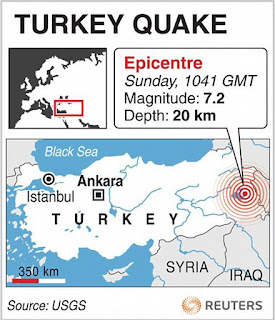 When I heard about the quake in Turkey, I was reminded of two rabbinic voices that warned us to expect such a thing.


In mid-September, 2011, Rabbi Nir Ben Artzi asserted that, "The leader of Turkey said what he said - and will receive a mighty blow from the Creator!"

The same week, just 6 weeks ago, Rabbi Nachman Kahana wrote these words: "I am waiting to hear a news bulletin that an earthquake of unprecedented force has swallowed up half of Turkey..."

History is speeding up.  Three major events in our region in a single week.

So what do I make of all this?


In his book The Ishmaelite Exile (which gets more potent each time I read it), Rabbi Yechiel Weitzman writes:

"Bil'am revealed in his final prophecy that the last stage in the process of Israel's perfection will be characterized by the alliance between Ishmael and Esav, an alliance aimed at tormenting the entire world and the Jewish people in particular. This will be followed by the downfall of Ishmael and Esav, a downfall that will usher in the redemption." (p. 143)

Who are Ishmael and Esav today?  Ishmael today are the Muslims.  Esav today are the Western, Christian countries.  Muslims are very busy lately killing each other.  Western countries are suffering from significant economic woes.  And both are being hit by earthquakes and other extreme forms of weather-related disasters.


These may both be so.  Nevertheless, I'm choosing to stay  focused on the light.

You're an inspiration. May we all focus on the light!