Over Sukkot, my husband and I went to the private home of a venerable rabbinic couple for a meeting. The wife, whose name I can't reveal because I don't have her permission, is around 80 years old.  She was raised in the US and came to Israel as a very young woman, many years before I was born.

I was startled to discover, in her, a worldly, open-minded rebbetzin who, when her husband referred to her an Orthodox feminist responded, "There's nothing wrong with that."

While our husbands talked about rabbi business, she and I spoke about many things - becoming religious as an adult, life in Israel, learning and teaching Torah, the status of women in Judaism and the place of women in shul.

A day or two after we met, she forwarded me a Torah article she thought I would enjoy and offered this private comment on my recent blog post about how difficult Yom Kippur had been for me.

I have long ago come to the conclusion that by and large, Synagogue is not the best place to commune with G-d. But it’s wonderful for socializing. After all it is called a Beth-Knesset, a house of gathering, coming together, which is also the literal meaning of the Greek word Synagogue. And one of the important aspects of Judaism is togetherness – so there you are.

I love how refreshingly unapologetic she is.  It's like she's giving me permission to daven at home and go to shul for the kiddush if that makes me more contented. 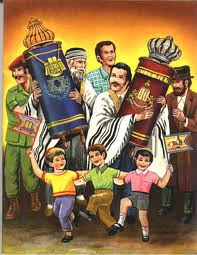 Interesting to have had this discussion with her just a few days before Simchat Torah, a day about which so many Orthodox women, myself included, feel conflicted. Last year at this time, I wrote about my complicated relationship with the day.

Even though men sometimes tell me it doesn't actually feel that way, Simchat Torah always looks like an enormous spiritual opportunity to me. So, rather than opt out completely, this year, I tried something different. Very different.

In our neighborhood, there is a women's Simchat Torah celebration.  It's explicitly not a minyan, so it's not a full davening, but it includes many of the traditional elements of Simchat Torah - Hallel, hakafot (circle dances with the Sefer Torah), aliyot and reading from the Sefer Torah, honoring two people with special aliyot, a group aliyah for those too young to get an actual aliyah, prayers for the sick, for those serving in the Israeli army, for the State of Israel and for agunot, the Yiskor prayer for victims of the Holocaust and deceased family members, the prayer for rain, a festive kiddush and more.

Although I don't know how long this group has been getting together, I did know about this option last year. Three main circumstances pushed me to attend this year.  First, I knew I wasn't going back to our regular shul for Simchat Torah.  Second, the group moved to a location much, much closer to me. And third, since making aliyah, I opt, as often as possible, to try new things rather than decline them. In Israel, I often feel rewarded with singular experiences just for showing up.

Since I'm so outspoken about my shul-related angst, a lot of people seemed curious about what I thought of the women's Simchat Torah service.  Here are some of my impressions.

I marveled at the depth and breadth of synagogue skills this group of 75+ women possesses.  I came in just after Hallel, as the hakafot were beginning.  I saw women reading the preamble to each hakafah aloud from a machzor and singing songs that were largely unfamiliar to me.  I saw gabbaot, one even wearing pearls, calling women to the Torah, women making brachot and reading Torah verses, chanting from a Torah scroll, chanting the Haftarah and reading and singing lengthy Hebrew prayers aloud.

Although I have worked hard to fill the gaps over the years, today was one of those times when I most acutely felt my lack of a proper Jewish education.  Like most of these women, my daughters have been taught tefillah from the time they could walk and talk. My deficit in this area, coupled with the fact that, for so many years, decades even, shul attendance has been an irregular and largely passive experience for me, I felt particularly liturgically inadequate today. I acknowledge, and am not particularly threatened by, the superior synagogue skills of most men.  But when women do liturgical things I cannot do, the feeling that I will always be a bush-league shul Jew comes into sharp relief.

It was fascinating to be so close to the action, to see people rotating on- and off-duty to stand with the Torah, to watch the Sefer Torah being covered and uncovered with reverence, to watch the reader point out the exact place in the scroll from where she would read and to have women touch that place with the Torah's gartle and kiss it.

I was nearly as passive today as I generally am in shul, though this time, it was by choice.  I could have held the Torah while we were dancing. I could have had an aliyah and I could have decided whether or not to recite the brachot before and after. I could have taken the time, in advance of this morning, to learn to chant from the Sefer Torah. If 11 year-old girls and 12 year-old boys can do it, I'm sure it's not beyond my capability. I could have taken the time to memorize and then recite a prayer. I could have called out the names of the sick for whom I daven privately. In a women's service, all these options were open to me.  In the end, I chose to do none of them, but knowing I had the option was, in its way, electrifying.

Truthfully, as I danced with the women who held the Sefer Torah, some of whom held it like a baby, I felt more faux than joy.  Although the organizers did an amazing job coordinating, it was, unavoidably, a make-shift service. I knew about 30% of the women there, and I was acutely aware that this was something other than celebrating with my community. Did I feel Gd's presence there? Honestly, I didn't. Not because He wasn't there. I'm sure the lack is in me.

Having said all that, there were a few moments that touched me very much.

During hakafot, there were lots of little girls around. Much later, when it was time for all the children to stand beneath the tallit, there were only two girls, both pre-Bat Mitzvah age, left in the crowd.  When the women began singing Hamalach Hagoel, I started to cry, remembering the hundreds of nights I put my young daughters to bed with this song.  It's been so many years since I've heard it, but the memory of the funny way we used to pronounce the name Yitzchak made my eyes fill with sentimental tears. Definitely a highlight.  And an unanticipated one, because, as a result of the trauma of my very first Simchat Torah, when the gabbai announced, in Yiddish, that little girls were forbidden from standing under the tallit for Kol HaNe'arim, I have never actually been in shul for it.

Another highlight were the tears of some of the women who took an aliyah, perhaps for the first time in their lives. During the years I was deeply involved with issues of women and Judaism, I remember hearing a well-known older woman report that, after being called to the Torah for an aliyah in a women's service, she was startled to realize that, after a lifetime of being religious, that was the first time she had ever seen the inside of a Sefer Torah.

I know many women don't share this, but I always feel the need to kiss the Sefer Torah. I wasn't sure if the Sefer Torah was going to circulate among the women today.  So after hagbah, after the Sefer Torah was dressed and being held by the magbi'ah, I walked over to where she sat, touched my prayer book  to the Sefer Torah and kissed it. No one told me I wasn't allowed. No one said a word. And I reveled in having that kind of access.

Many years ago, an old friend told me that Gd requires men to gather in a minyan three times a day because, left to their own devices, they are not so good at making friends.

Watching, thinking, processing all that went on today, it's still not clear to me if this is the way Gd expects Jewish women to worship Him. I, myself, don't seem to have been built for communal prayer.

It was so worth it, in the end, to see and experience and admire the spiritual aspirations of committed, knowledgeable Jewish women who are reaching out to Gd in new ways.

Even if those ways are not my own.

Lurking. Happy you are experiencing. Davening for your full spiritual happiness. <3

I'm pretty sure God doesn't expect Jewish women to just sit and talk behind the mechitza, or to sit at home in frustration while Jewish men are celebrating simchat torah.

It's a blessing that you realize this. Despair, constantly finding fault and thinking negatively is a sin. I say this not to criticize but I have to work on this too. It is a pattern of thinking we can fix. Some things we can't change but we can change our reaction to it.

I'm not particullary an avid shul goer either, but twice on Simchat Torah, I felt plugged into the spiritual energy. Some years ago, during Hakafos, the inclusion of a disabled boy held high in his wheelchair pulled me and the other women into simcha. The radiantly joyous face of that child being held high brought us to tears of joy. The second time was actually, this year. At a different shul, a young father flung his toddler high into the air and effortlessly caught him. There was no fear, only rapture and complete trust on that tiny boy's face. He knew his Abba would catch him. Then I looked at a different Abba holding his little girl securely in his arms. She was so completely content in her Tatee's arms. Then it hit me. Simchat Torah is a reminder for us, We are all children of our Abba BaShamayim. We need to remember and be secure in His loving arms and have the emuna that he will catch us when we are being thrown in the air. After all, our loving Father in Heaven is doing both the catching and throwing. The spiritual gift of Yom Tov doesn't have to include us personally, sometimes you just have to interpret what you see.

I admire how honest you are about your shul-related feelings in this and similar posts. I could have written these. I go to shul these days only because I have very young children. They go for the social, I go to supervise their play outside the shul. I have become very disillusioned with the service on the odd occasions when I have nipped in. It leaves me cold. It is dry, boring, not a spark of emotion in it. It makes me really sad and extremely frustrated. I secretly wonder often "What's WRONG with me?" But reading your posts I know I'm not the only one who feels this way. I have NO desire to be up on the bimah or reading from the Torah, I would just like to FEEL something when I'm in shul. I am trying to come to terms with the fact that shul is not where it's at for me and that's ok. My relationship with Him will have to carry on being a quiet, private one.