When an awareness dawns, fully formed, we are sometimes blessed enough to perceive it as the Divine gift it is.

When I was a newly-minted religious woman, Hashem sent me an insight about the role of women in Judaism. There is no way this understanding was my own because, at the time, I had precious little Torah knowledge. And, in fact, I came to question it over the years, since I had no source for it.  But I remember exactly where and on what occasion I first said it out loud, in front of some equally recent ba'alot teshuva and a much respected rebbetzin in Baltimore.

In 2006, a book came into my field of vision that basically made the same argument, this time deeply sourced in Torah, with 192 endnotes.

The Moon's Lost Light: A Torah Perspective on Women from the Fall of Eve to the Full Redemption by Devorah Heshelis is a book that comforts me every time I feel a twinge arising from being a woman in a traditional Jewish life. I summarized the book and taught its principle points to groups of religious women on two separate occasions over the past year.

The first time was my very first teaching experience since making aliyah. And I left that evening thinking that I will never teach in Israel again.

The ideas in the book, which I believe are original and brilliant and astonishingly comforting, were not well-received. I felt emotional walls going up as we discussed the book. I was told, "We've all dealt with the 'women's issues' decades ago. We've moved on and we don't want to hear about that stuff anymore."

I, who had often received encouraging feedback when teaching adult women for over 20 years, walked away from that experience in shock. I knew my presentation was solid - well-organized,clear and interactive. The only thing I could conclude was that I was not meant to teach in Israel. The very thought devastated me.

I was invited to teach an entirely different text a few months later by a different group of women.  With trepidation, I agreed.  That series of talks turned out to be much more typical of my teaching experiences. So, in thanking them for the invitation, I told this group of women the story of how the last talk had gone horribly wrong and they persuaded me to teach the ideas in the book to them.  That was my second presentation of the ideas in The Moon's Lost Light.

I've read the book a few times, and am in the middle of yet another reading.  This time, it was prompted by meeting the author at a shiur.

There is a woman from Brooklyn named Evelyn Haies who, passionate about the message of Rachel Imenu, bought a building near Kever Rachel and started an organization called Rachel's Children Reclamation Foundation (RCRF).  RCRF sponsors Torah talks in a hall very close to the kever. 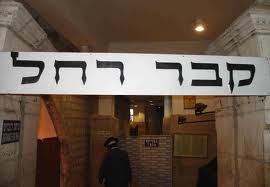 Every since my husband spoke there about a year ago, I have been on their mailing list.  When I saw the announcement that the author of The Moon's Lost Light was speaking, I committed to attend. In the book, the section called ABOUT THE AUTHOR says:


Devorah Heshelis is the pen name of a Bais Yaakov graduate who presently resides in the Jerusalem neighborhood of Kiryat Tsanz. In addition to being a wife and mother of eleven children, she has been teaching women Torah for over twenty-five years.

I wanted to meet this woman.

Her talk, entitled "The Essence of the Greek Exile", was fascinating. I took copious notes and came home and excitedly told my husband and one of my daughters the highlights.

But she was even more fascinating to me. Here was a woman who, under normal circumstances, I would never have met. We don't exactly live in the same weltanschauung.  But Torah, and the RCRF, brought us together.

As it happened, I went to the shiur with a friend who volunteered to drive the author to her bus stop in another part of Jerusalem.  So we got to talk more during the car ride and now we have begun a personal email correspondence.

I don't know what lies ahead in our correspondence, but I have already benefited. The whole experience, meeting the author of a book that touched me deeply, learning Torah about exile and redemption in very close proximity to Kever Rachel and beginning a correspondence with a chassidish woman whose life experiences are so different from mine have already been spiritually nourishing.

So I was feeling pretty blessed by the opportunities life in Israel provides when we went to a wedding in Jerusalem a few nights ago. Upon walking into the wedding hall, the first thing we heard was the sound of women singing. It caught my attention because it was loud.  But also because it was so novel. Walking toward the joyful sound, I saw a phalanx of young women, arm-in-arm, singing and dancing in front of the seated bride. 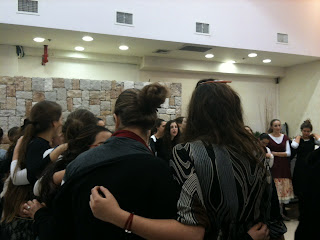 It's common to see this among young men who are friends of the groom's, both in the moments before the chuppah when guests approach to bestow good wishes on the bride and groom and later, at the chuppah, especially if the groom is a yeshiva student or in the army and has a lot of young, energetic male friends.  But in my experience, it's rare, and quite delicious, to see young women do this for their friend, the bride.

And when a couple of hundred Jews sing Im Eshkachech Yerushalayim at a chuppah IN Yerushalayim, my eyes well up.

My heart is full. Thank You Hashem for the many spiritual opportunities, large and small, that nurture my soul. Thank you for the blessing of allowing me to live my life in the Land of Israel.

I studied the sefer with like-minded friends. We made a siyum, with the author, in my gina. It was amgical, en event the participants speak of with awe, months later.

Author of "It's MY Crisis! And I'll Cry If I Need To: EMPOWER Yourself to Cope with a Medical Challenge"
http://booklocker.com/books/3067.html

The Moon's Lost Light sounds wonderful. I just haven't been abl to get to the programs at Kever Rachel. Some day..

You don't elaborate but I hope she doesn't spew the falsehood that women are spiritually superior to men. It's a big myth and it's very destructive.