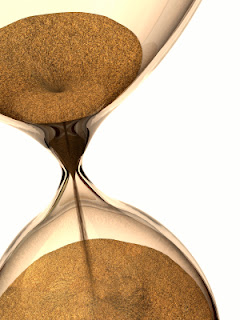 A few years before making aliyah, I belonged to a group of women who met regularly to discuss the impending geula. These were women who, like me, followed the blogs and the dvrei Torah and the rumblings in our own souls that told us something big was happening in the world.

Back then, I truly felt something was imminent. But, of course, three years later, daily life is pretty much still unredeemed.

The Rambam reminds us that belief in the coming redemption is one of the 13 principles of the faithful Jew: "I believe with complete faith in the coming of the Messiah. Even though he may delay, nevertheless I anticipate every day that he will come."

At the same time, I totally get why some people have the attitude of, "I'll believe it when I see it." Because how many times in Jewish history have we been assured that Moshiach, and thus the final redemption of the Jewish people, is imminent? And how many times have our hopes been dashed?

For awhile after this intense period a few years ago, things got quieter in the world of geula watchers. The Geula Watch listserv that I moderate slowed way down, from a high of 130 messages a month to a low of 2 messages a month. Like many others, I turned my attention to other things.

Ah, but today, things are heating up again. Iran (previously known as Persia) makes no secret of their threat to wipe the "Zionist regime" off the map. Today, we are just a week away from the holiday of Purim when, in the time of the Persian empire, the Jews were saved from Haman's threat to annihilate us all. How extraordinarily coincidental eerie significant it seems that the Jewish people are threatened again from the very same place. Indeed, there are voices predicting something very big coming very soon, even that Israel is facing war with Iran in the very near future, a war that could be the catalyst for the war of Gog u'Magog.

There are Torah lectures that bring example after example of sources predicting that this year, the Jewish year 5772, will be the year we meet Moshiach.

There are projects designed to help us bring the geula with compassion.

There are increasingly urgent calls for the Jews in the diaspora to make aliyah or at least to prepare spiritually for what's coming.

In short, there's a lot of talk, a lot of predictions, a lot of energy in certain circles of the Jewish world focused on the impending geula.

I'm just a simple Jew. How can I know whether we are really living in the last days of the world as we have always known it? Perhaps we really, truly are on the precipice of a time when, in the wake of the revelation of Moshiach and the complete redemption of the Jewish people, the whole world will come to believe in the God of the Jewish people, as we pray, "Before You Hashem our God, they will bend every knee and cast themselves down and to the glory of Your Name they will render homage, and they will all accept upon themselves the yoke of Your kingship that You may reign over them soon and eternally."

But maybe it's all just a lot of hype and the world will continue as it has for a long time to come.

Rabbi Dr Abraham Twerski teaches that there is, ultimately, nothing bad in the world. There may be things that are bitter, just as medicine that heals us is sometimes bitter, but bitter is not the same as bad. So if Moshiach doesn't reveal himself by the end of this summer, and if I sit in shul on Rosh Hashana in an as-yet unredeemed world, it will be bitter, but I must believe it will not be bad.

On the other hand, we are promised in the Torah that eventually, we will greet Moshiach. Nu, maybe "eventually" really is going to be very soon.

So, to prepare, I'm nudging myself along the path of spiritual growth. I took on an additional daily prayer. I'm deleting the daily emails that offer free, and often cheesy, novels to read on my Kindle. In general, I'm trying to cut down on the vacuous things in my life and replace them with more substance. I'm learning more Torah. I'm thinking about God more. Trying to be nicer to the people in my life. Trying to talk to God more, praying for the safety of my family in turbulent times and for the opportunity to live in holiness. Strengthening emuna.

So even if, God forbid a bajillion times, the entire rest of my life, I will live with the unceasing undercurrent of messianic anticipation, at least I will have spent my time growing toward God.

Your advice about growing towards G-d should have been the "norm" for all Jews even before blogging about geula. Instead, many Jews waste their time on Geula blogs instead of working towards a common goal of learning Torah and self-improvement through many mitzvos, which would have eliminated the current Haman altogether. We cannot turn back time, and Hashem knows what we need to merit Moshiach. Suffering appears to be the only answer towards redemption.

There are always two paths from which to choose. The first is the shortest, although many view it as the hardest path. Why? Because it requires us to make the hard choices when there are easier paths.

Whether we're FFB, BT, or FFM (Frum From Mikvah--gerim) we always have this choice in front of us. The question that still needs to be asked is how often we see these choices?

Do we see them only at our Bar/Bat Mitzvah? Do we only see them when we stand under the Chupah? When exactly do we see them?

The ultimate answer is we need to see them every minute of each day. The Tzaddikim teach us that we need to make Tshuvah every morning for having thought the day before that we knew what HaKadosh Baruch Hu wants, is, etc.

If our goal is to be who HKB"H created us to be, then the answer is clear. As David HaMelech says in Tehillim, "I am a worm."