Dust In My Teeth - A Photoblog 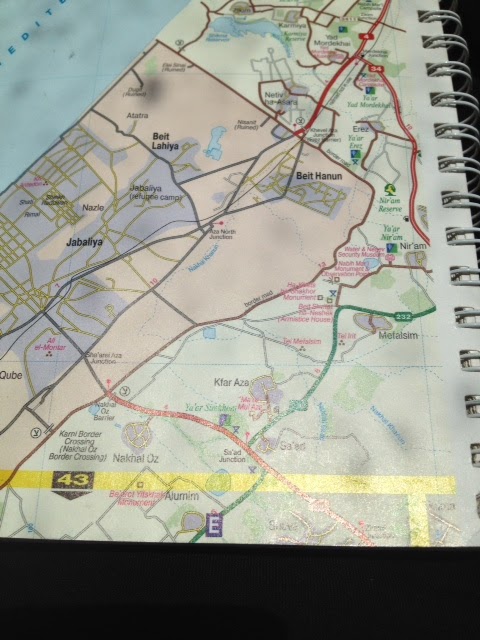 In this map, the pinkish area is northern Gaza. That will give you some idea where I was today. Not in Gaza, but in three places just outside of Gaza where our sons and daughters, husbands and wives, sisters and brothers are stationed, either waiting to go into Gaza to fight for the safety of the Jewish people or having just returned, in order to rest before their next tour inside that hell hole.

I traveled with a convoy of six cars, filled with neighbors, relatives and a LOT of food and supplies. Those of you in Israel well know that so many people are doing exactly what the 16 of us did today. As one participant who has lived in Israel for decades told me, "It's like we can't do enough for our soldiers. Everyone just wants to give!"

This is our group at the beginning of the day, buying food, drinks and other supplies from a small grocery store in Beersheva.


While there were some quiet moments in the day, there were also plenty of tense and uncomfortable moments, moments when the reality of war became exceedingly pronounced.

At one point, we were blocked from proceeding to our destination, until one of our group members pulled some strings to get us passed the police blockade. While we were waiting, we parked in front of this communal bomb shelter which someone had taken the time to decorate. 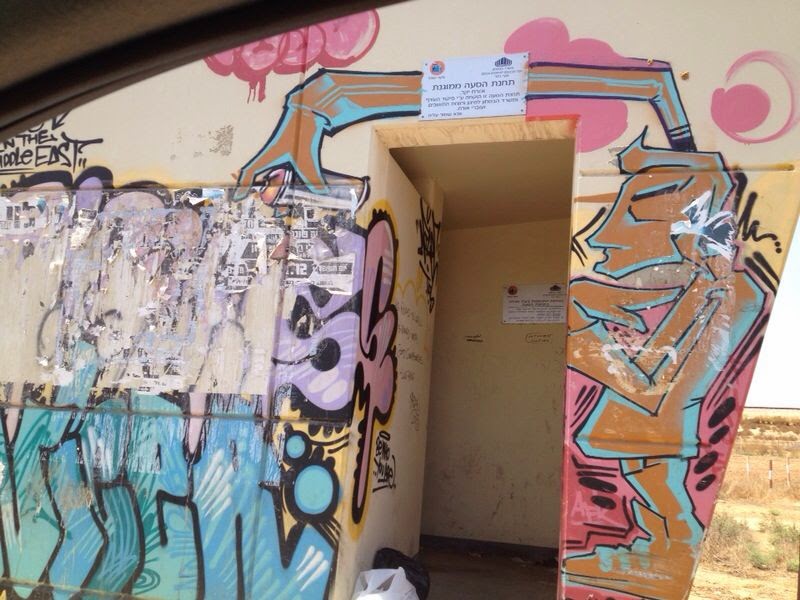 At another point, our convoy was caught in the middle of nowhere, on a road so dusty it was a more than a little unsettling. 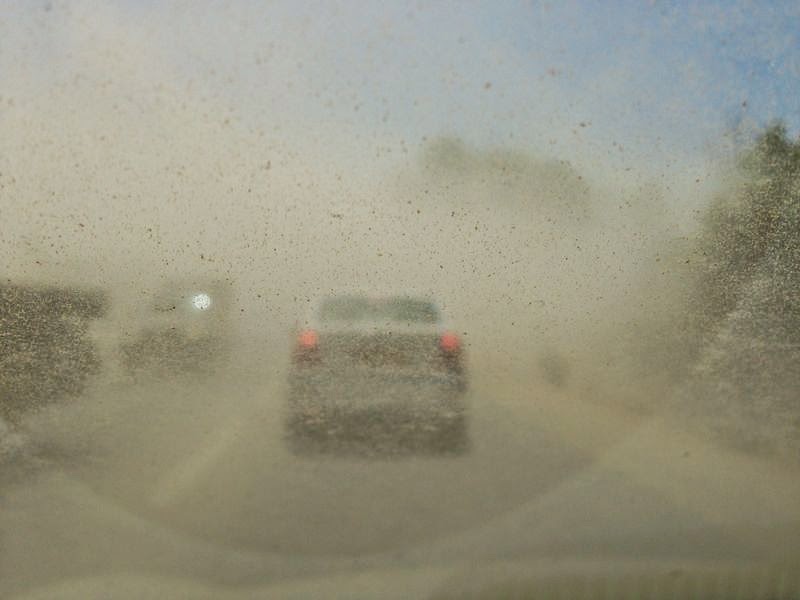 Our unease was exacerbated by the many powerful booms we heard overhead. It was during these tense moments that I felt especially moved to recite some extra chapters of Tehillim. About this moment, my husband wrote, "Before we got to our second base, however, while idling in traffic waiting for the go-ahead to enter the base, we could hear loud booms and feel the thud of contact even while in our cars. When I asked a nearby security man what the noise was, he said it was Israeli planes striking at Gazan targets. It was real, it was unnerving, it was scary, and we had to decide as a group whether to continue ahead or turn around. Given that there were no sirens sounding, and understanding that our soldiers deal with much worse and we are here for them, we forged ahead."

Everywhere we traveled, we saw signs of thanks and praise for our soldiers. The country is unusually united in its support for this mission and for the need to eradicate the enemy who would like to see us utterly destroyed. For the Jewish people, this achdut, this unity, is very much a spiritual merit. 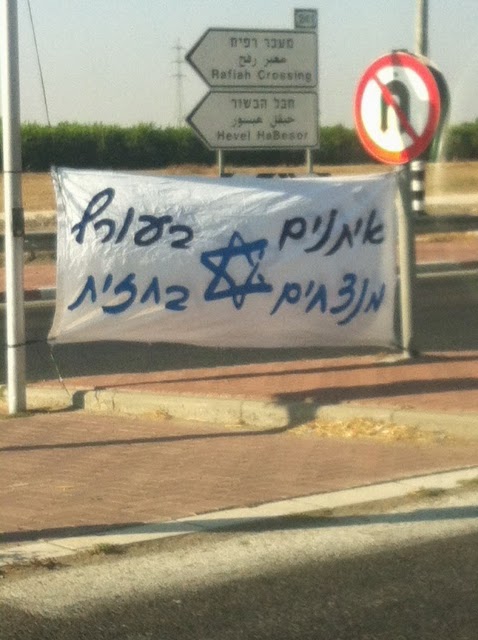 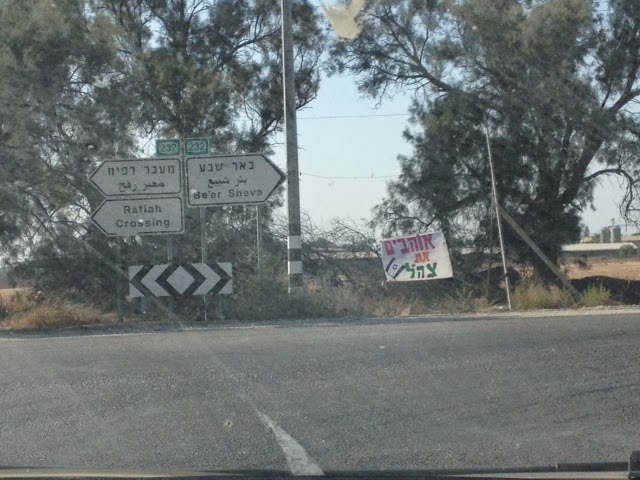 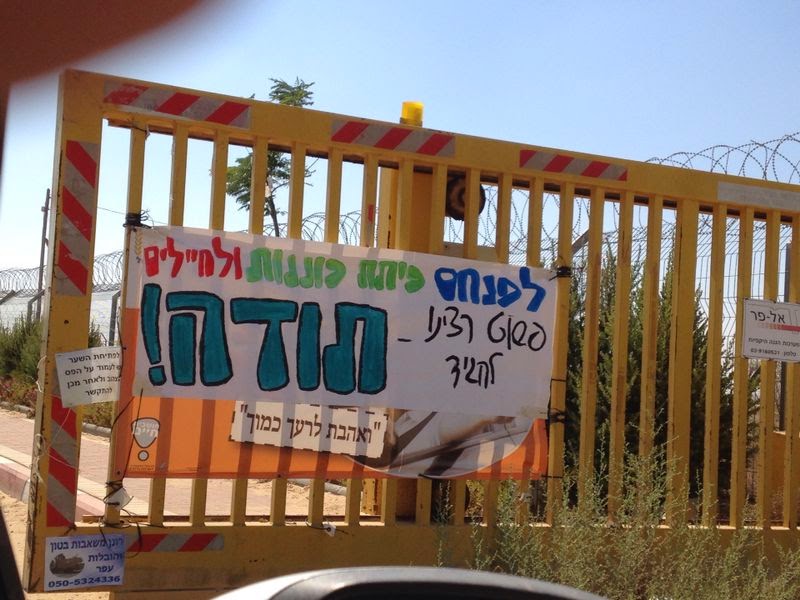 At one stop, to get from our cars to the soldiers, we we walked through something resembling sand, but softer and more airborne. This sand-like residue pervaded our clothes, shoes, hair and teeth. At this point in the day, it was also very, very hot. Nearly 100 degrees Fahrenheit. It became exceedingly clear why the soldiers have been asking for baby wipes.

We marveled at how the men and women we saw there were able to tolerate the conditions. And then we remembered that, at this location, they were not actively fighting. It must have seemed like paradise.

It's very difficult to overestimate what a privilege it was to do something, anything, no matter how small, for the men and women, all young enough to be my children, who are serving in the Israeli Defense Forces. One of our group members has already written about the emotions and the immense mutual gratitude that was expressed all day long. These pictures are meant to bring it home.

My husband said it best when he wrote, "Thank God we came home safely, and I pray that our soldiers defending the land and people of Israel be privileged to do the same."

Postscript: Our mission today traveled under the banner of Project Socks. Many of our supplies were bought with funds from people living in Canada and the US. As long as our soldiers are fighting in Gaza, we will continue to raise money and bring supplies directly to their hands, as we did today. If you would like to contribute to the foundation that is funding Project Socks, please contact me using the contact form in the top of the right hand column or email rivkah at kotevet dot com and I'll make sure you get connected.

Fantastic! thank you for sharing