An Art Story That Is Also A Jewish Story

Walking in the shuk in Jerusalem today, DH stops me at a vegetable stand. We have been to the shuk hundreds of times and I have never noticed this vegetable stand. Its walls are covered with photos of holy people.

All of them are men. 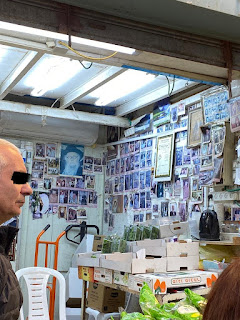 Then DH points something out to me. Could it be that there is actually one picture of a holy woman among the dozens of men? 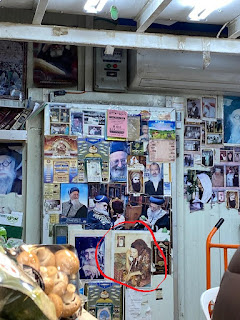 When we lived in Baltimore, I had a small art collection. It was my personal rebellion against the overwhelmingly masculine images in the world of Jewish art. This was way before erasing women from magazines and advertising and vandalizing billboards with women's faces was commonplace. I was tired of seeing Jews represented as if we all looked like this: 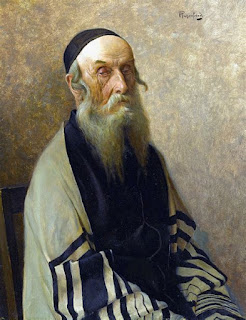 Making aliyah required us to downsize significantly. We had to reduce our possessions from those that filled a normal American house to what would fit in a small Israeli apartment. Many of the art pieces in my carefully curated collection of Jewish women doing Jewish things had to go. I sold them for very little during one of our uncluttering sales. 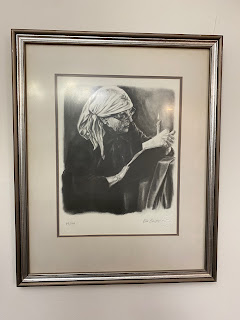 This is who I hope to become some day - a God-fearing old woman who sits and recites Tehillim (Psalms) by candlelight.

I also kept this one. It's a Michoel Muchnik image called "Challah Ladies". It features the backs of two women baking challah. 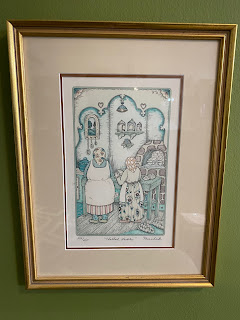 And, of course, I kept these two needlepoint works that were done by my mother A"H. 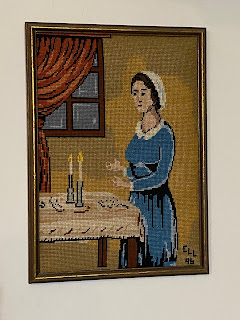 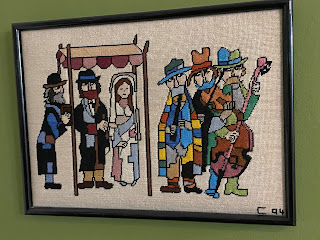 All the rest, and there were at least a dozen more, I sold for next to nothing or gave away.

Until today, when two of the pieces I parted with almost 12 years ago were restored to me by a kind and generous friend in Jerusalem, to whom I had sold them back in 2010. 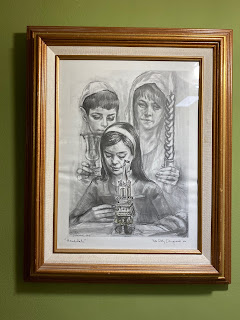 This image was done in 1966 by Ida Libby Dengrove. Can you imagine an image like this being created today, with a young girl reciting havdalah while her brother holds the kiddush cup and her mother holds the candle?! What connects me to this work even more is that Dengrove passed away from complications of Alzheimer’s at the age of 86, exactly my mother's A"H age and cause of death.

Also restored to me today was this grand (36"x24") work. It's a numbered lithograph, also by Michoel Muchnik. It's called "Elisha's Blessing" and is based on the story in Melachim Bet (II Kings) 4:1-7. It's the only Tanach-based work I ever owned. 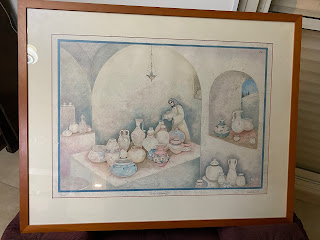 The backstory is that there was a young and destitute widow who Rashi identifies as the wife of the prophet Ovadiah (Obadiah). A creditor threatens to take her two sons into slavery if she does not pay her debt, but all she has in the house is a small jug of oil. The prophet Elisha instructs her to gather vessels from all her neighbors and start pouring from the small jug of oil she has. Miraculously, the oil continues to pour out and fill every vessel she borrowed. The miraculous abundance ceases only when she runs out of vessels in which to pour it. Elisha then advises her, "Go sell the oil and pay your debt; and you and your sons will live with the remainder."

I close with words I never expected I would write someday - a quote about art credited to 19th c. German philosopher Friedrich Nietzsche: 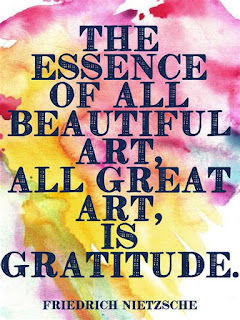 Beautiful, thanks for sharing!